This is a trade. I already flipped this stock a few weeks ago at higher prices.

Company Description: Power Corp. of Canada (PWCDF:OTC) is a Canadian holding company that has interests, directly and indirectly, in financial services, communications and other business sectors. Power Corporation of Canada | Home This company has economic interests, directly and indirectly, in a large number of other publicly traded companies in Canada and other foreign countries.

Conversion Value at the Time of Exchange Based on C$29.01: 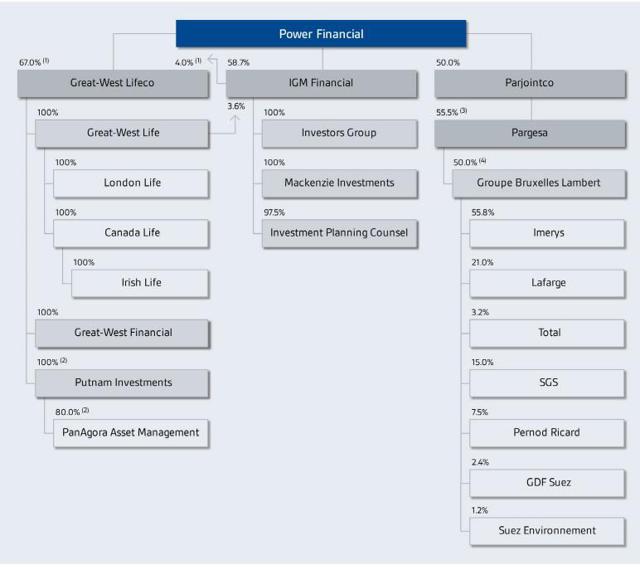 So Power Corporation of Canada directly controls Power Financial and consequently has an indirect controlling interest in Great-West Lifeco and IGM Financial.

Power Financial also has a 50% in a Parjointco which in turn owns 50% of Groupe Bruxelles Lambert SA, whose ordinary shares are traded on the U.S. pink sheets under the symbol GBLBF and in Belgium with the shares priced in Euros. GBLB.BR That company in turn owns stakes in other public companies as noted above. (Groupe Bruxelles' Investments: Asset classes | GBL)

Power Corporation of Canada is profiled in a Motley Fool Article.

The company is currently paying a quarterly dividend of C$.29 per share. Power Corporation of Canada | Dividends

While I did not own that position for very long, I did realize a profit and bought the shares back at $1.38 per share below the last purchase price of $27.29. In the picayune trading book, that is a victory.

Dividends: POW is currently paying a quarterly dividend of C$.29 per share. Dividend History The dividend rate has remained constant since the 2008 second quarter when it was raised from C$.24125 per share. When reviewing that history, it is important to keep in mind that there have been several two for 1 stock splits, with the last one occurring in 2004. Splits Since 1963 The dividend page does not adjust for those splits, as noted therein.

Since the PWCDF dividend yield will be dependent on the conversion rate into USDs, which is a variable, I simply calculated the dividend yield for now based on a total cost per share of C$29 share price and arrived at a 4% yield.

Recent Earnings Report: As a holding company, POW's operating earnings are primarily derived from its ownership interest in Power Financial. 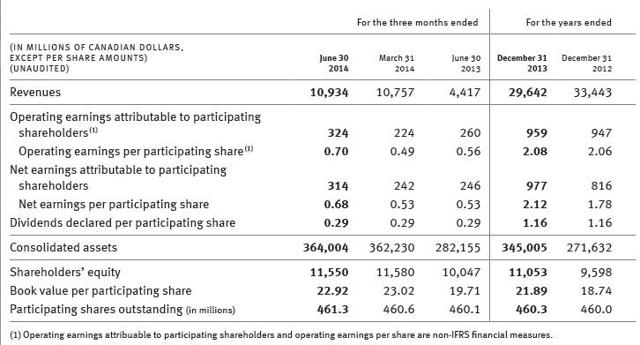 POW reported 2nd quarter earnings available to common shareholders of C$545 or C$.77 per share, up from C$.65 in the 2013 second quarter.

Rationale: This stock has some dividend support and capital appreciation potential after being recently knocked down some in price. The valuation is reasonable. According to the Bloomberg data, the 2014 estimated P/E is currently 11.442 at C$29.18, slightly above yesterday's close, with a TTM P/E at that price of 13.5648.

In the event the CAD can regain its sea legs, some of the potential appreciation could come from just a rise in value against the USD. That does not have to occur today or this week or even this year. The value simply needs to increase above the exchange rate when I purchased these shares, hopefully at a time when the ordinary shares have risen in price too.

Unfortunately, the converse is true, the so called infamous double whammy: a decline in ordinary price in CADs and a decline in the CAD/USD conversion rate from those prevailing at the time of purchase.

Risks: Currency risk is present for me since I elected to use USDs to buy the ordinary shares listed on the U.S. pink sheet exchange. The shares cratered during the recent Near Depression, with the Toronto listed shares falling about 50% in value: POW.TO Interactive Chart Consequently, there is obviously the usual risks associated with recessions. The company discusses risks starting at page 81 of its 2013 Annual Report. 2013.pdf

After purchase, I want the CAD to rise in value against the USD. That rise will flow through into the value of the PWCDF. 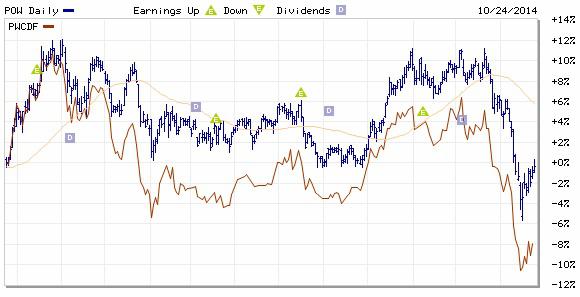 The currency conversion headwind has actually resulted in about a 8% loss to PWCDF over the past year, while the ordinary shares priced in CADs have just returned to break-even.

The dividend payments to the PWCDF owner will be paid in USDs after a conversion from CADs and a 15% withholding tax for shares held in a taxable account. Foreign Tax Credit

A tax treaty between the U.S. and Canada currently exempts dividends paid into a retirement account from regular "C" Canadian corporations. How to Avoid Taxes on Dividends Overseas"- NASDAQ.com (does not apply to "distributions" made by Canadian REITs)

The dividend amount will vary depending on the conversion amount. If the CAD is declines in value, a dividend paid in CADs will buy fewer USDs, which in effect is the same as a dividend cut. Conversely, if the CAD rises in value, then the owner of PWCDF would in effect be receiving a dividend increase.

And POW has its own direct investments including a 10% interest in the China Asset Management. Some investors might just prefer buying Power Financial and avoid adding another layer to the valuation problem.

Investments in hedge funds had a fair value of C$402 million, page 6

PWCDF is thinly traded and limit orders are essential.

I also bought the ordinary shares using CADs on the Toronto exchange.

The shares were trading below their 50 and 200 day SMA lines when I purchased this lot. PWCDF Interactive Chart

Disclosure: The author is long PWCDF.

Additional disclosure: Disclaimer: I am not a financial advisor but simply an individual investor who has been managing my own money since I was a teenager. In this post, I am acting solely as a financial journalist focusing on my own investments. The information contained in this post is not intended to be a complete description or summary of all available data relevant to making an investment decision. Instead, I am merely expressing some of the reasons underlying the purchase or sell of securities. Nothing in this post is intended to constitute investment or legal advice or a recommendation to buy or to sell. All investors need to perform their own due diligence before making any financial decision which requires at a minimum reading original source material available at the SEC and elsewhere. Each investor needs to assess a potential investment taking into account their personal risk tolerances, goals and situational risks. I can only make that kind of assessment for myself and family members.