Currency Conversion: Nordea's ordinary shares are priced in Swedish Krone. The ADR's are available on the pink sheet exchange in the U.S. where shares are purchased in USDs. NRBAY Nordea Bank AB

To know whether the ADR shares are being priced correctly, I need to know the closing price on the Stockholm exchange and then convert that price from Swedish Krone into U.S. Dollars:

I did a currency conversion based on the ordinary shares priced in Swedish Krona. The shares closed at SEK90.6, but were trading slightly lower when I made my purchase.

I set my limit price slightly below the then existing USD equivalent for the ordinary shares priced in SEKs.

I regretted selling those shares, particularly since they continued to rise after I exited the position, topping out near $15 last June: NRBAY Interactive Stock Chart

Company Description: Nordea Bank is the largest financial services group in Northern Europe operating through approximately 800 branches primarily in Denmark, Finland, Norway, and Sweden. Some branches are in Russia, the three Baltic countries.

I took a snapshot of the income and balance sheet items comparing 2013 with 2012: 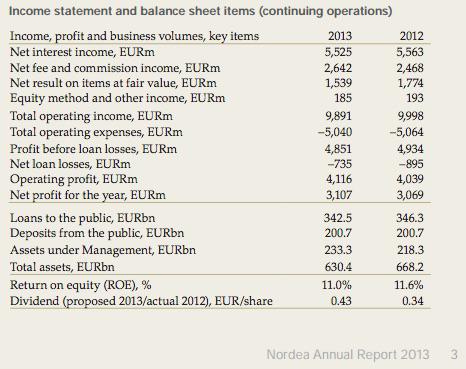 The return on equity numbers remained over 8% during the recent Near Depression: 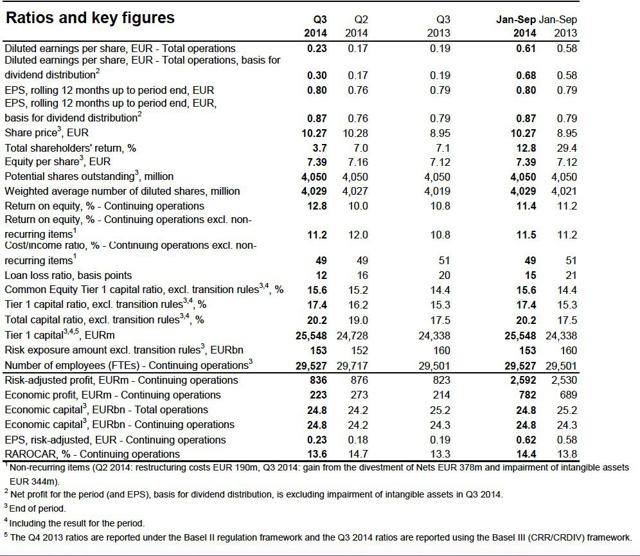 Earnings per share, ex items, increased to €.30 from €.19 in the 2013 third quarter and to €.68 from €.58 for the ninth month period ending 9/30/14. The capital ratios are good in my opinion. The Nordea efficiency ratio, defined as costs to income excluding extraordinary items, is shown at 49%. That would be significantly lower than big U.S. banks and consequently much better.

Loan losses declined to €112M or .12% of total loans and have been trending down: Page 12, Media analyst presentation Q314.pdf 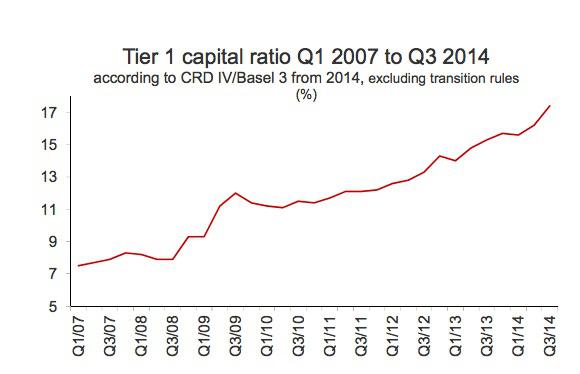 Dividends: The current dividend policy is to pay out more than 40% of the net profit for each year. That policy will result in some variation in the dividend rate. The dividend is paid annually. The last ex dividend date was March 21, 2014.

The dividend for the ADR will depend on the exchange rate at the time of conversion. If the dividend for 2014 was SEK4, and that amount was converted at the same exchange rate as prevailing on 12/23/14, the USD equivalent would be about $.5135 per ADR share or a 4.44% dividend yield at a total cost of $11.56 per share.

I can not compute the dividend yield until Nordea declares the dividend for 2015 early next year and then I would need to have the conversion rate too.

The SEK is already near a the 5 year low set around 5/30/10. SEK/USD Interactive Chart

If I took the exchange rate for 5/25/10, which looks like the low point over the past 5 years just eyeballing the five year chart, a 4SEK per share dividend payment would buy $.505, which would be a slight dividend cut through currency exchange from the exchange rate on 12/23/14.

I go through this exercise to demonstrate that the price of the ADR and the value of the dividend are both impacted by the currency exchange factor.

Rationale and Risks: Nordea appears to me, sitting at a desk in Tennessee, to be one of the best European banks, probably the best large bank in Europe. Notwithstanding stagnation in its primary markets, Nordea is still generating good numbers. There is also decent dividend support and the valuation is reasonable at slightly over 11 times 2014 estimated earnings.

Economic conditions in Nordea's home markets are stagnating. It remains to be seen whether those Nordic countries will tip over into recessionary conditions. Economic downturns are unfavorable for banks which is an obvious point.

The currency conversion issue has been a major negative recently for owners of the Nordea ADR priced in USDs as reflected in the chart below.

Comparison Chart: This is a one year comparison chart featuring the ordinary shares priced in SEKs (blue line) and the ADR priced in USDs (brown line). When looking at this chart, I see a significant price divergence, starting in the 2014 summer, that would be caused by the SEK losing value against the USD.

The USD may continue its parabolic upside move which would be bad news for me now as an owner of NRBAY.

Disclosure: The author is long NRBAY.

Additional disclosure: Disclaimer: I am not a financial advisor but simply an individual investor who has been managing my own money since I was a teenager. In this post, I am acting solely as a financial journalist focusing on my own investments. The information contained in this post is not intended to be a complete description or summary of all available data relevant to making an investment decision. Instead, I am merely expressing some of the reasons underlying the purchase or sell of securities. Nothing in this post is intended to constitute investment or legal advice or a recommendation to buy or to sell. All investors need to perform their own due diligence before making any financial decision which requires at a minimum reading original source material available at the SEC and elsewhere. Each investor needs to assess a potential investment taking into account their personal risk tolerances, goals and situational risks. I can only make that kind of assessment for myself and family members.