This topic was last updated here: Update For Portfolio Positioning And Management As Of 1/4/16 - South Gent | Seeking Alpha

I currently view the major stock market indexes as overvalued and have consequently raised my cash allocation. The recent dip makes the major indexes less overvalued than when SPX was at 2100. Market Remains Overvalued-dshort; Is the Stock Market Cheap? - dshort The Q Ratio and Market Valuation: December Update - dshort.

For those who wish to use the forward ex-items estimates, and I will take them into consideration notwithstanding their obvious flaws, it is important IMO to take into account their unreliability and the tendency to backload growth in the last two quarters particularly when it looks like earnings will start off sluggish or even go down Y-O-Y and/or down sequentially from the prior quarter.

There is a saying that is appropos here: Don't swallow the Wall Street speil "hook, line and sinker". 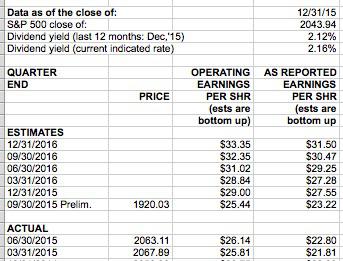 The 12/31/15 estimates for 2016 show backloading again as the year progresses from a sluggish start.

My goals in order of importance are (1) capital preservation; (2) income generation; and (3) capital appreciation. I am retired and have no earned income. I am no longer in an asset accumulation phase. I am more concerned about protecting what I now have than expanding the pile.

It is important to drill down into the freight traffic data. The rail traffice data is far weaker than truck tonnage shipments for reasons that are specific to the rail industry.

The tendency for some is to use the declining trend in "freight" data to support a dire or pessimistic view about the current state of the U.S. economy.

Is that warranted when the investor drills down into the causes?

The rail freight numbers are disconcerting and are one of deteriorating data sets that concern me.

Coal, petroleum and some manufacturing shipments were the major causes for that decline. Coal took a big hit compared to prior years.

The monthly data per category can be found here in a table format here: Freight Rail Traffic Data

When the investor drills down, the major problem is the substantial decline in coal shipments: 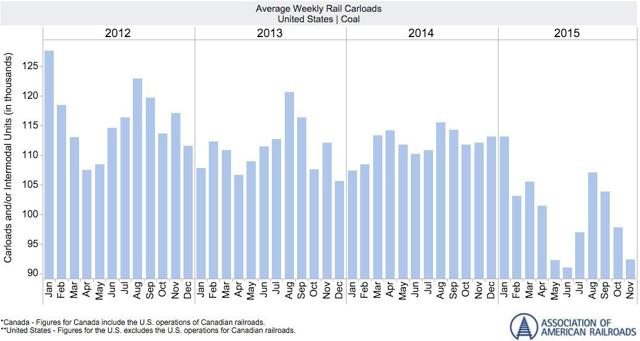 That table reflects why coal companies are in a world of hurt. But what does it say about the U.S. economy when the investor recognizes that electric generation using coal is being replaced by natural gas fired units (combined cycle plants) and natural gas is transported by pipelines? I would take that into account. The method of transport for use in generating electricity is changing rapidly.

A Bank of America analyst opines in a Bloomberg column that the kind of decline in 2015 portends a slowing economy ahead. Bank of America: Rail Traffic Is Saying Something Worrying About the U.S. Economy - Bloomberg Business

Trucks do not transport coal.

The "seasonally adjusted" truck tonnage index, which originates from their association, was in a significant up move starting in April 2009 but has since leveled off Y-O-Y. Maybe the index will roll over or maybe it won't. It is just too early to draw a conclusion. 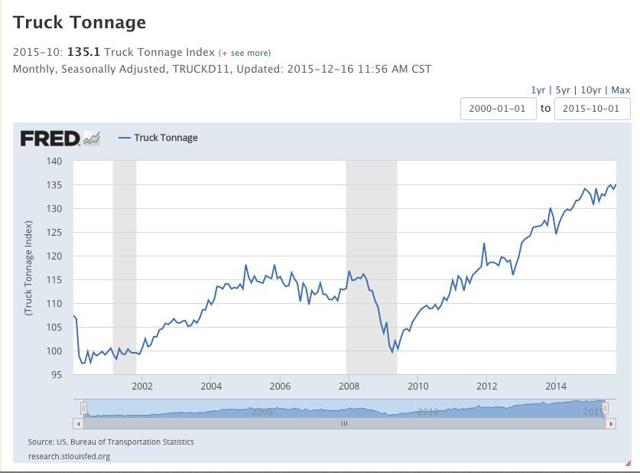 The foregoing truck tonnage is attributable by the St. Louis FED to the DOT who also has a seasonally adjusted truck tonnage index: Transtats The DOT uses "the Monthly Truck Tonnage Report (MTTR), issued by the American Trucking Associations (ATA)."

Almost all of the data in that publication deals with rail shipments. Figure 18 does reproduce the ATA Truck Tonnage Index.

Another index is called the "Cass Index": The Cass Freight Index: A Measure of North American Freight Activity

This model is predicting that real GDP will grow only .8% in the 2015 4th quarter, which is well below the current consensus estimate. frbatlanta.org

I am repeating some previous comments here and adding commentary where appropriate.

I view it as more probable than not that the count will have to be re-started before the Stable Vix Pattern ("SVP") formation. The jury is still out but just barely.

The closes above 20 since 10/5 so far are not yet sufficient to restart the count but are coming close. The most important series started on 1/4/16.

The days under 20 are becoming fewer and more sporadic after VIX movement into the 20s.

The Model suggests that the investor sell hedges bought during the Recovery Period when the VIX spikes into the high 20s or low 30s and to consider then to buy some stocks as a trades. The investment pattern in a UVP is largely to sell the rips (temporary movements back to below 20 VIX movements) and to buy the dips (temporary movements into the high 20s and 30s). Longer term investments can be made during the Catastrophic Events which usually occur at some point during the UVP.

I made the following observations in a 12/12 comment, which is worth repeating here IMO:

(1) The Confirmation Event definitely requires a restart of the below 20 count required for the formation of a Stable Vix Pattern.

(2) The Confirmation Event validates the Trigger Event as a sell signal.

(3) The Confirmation Event requires several days of movement over 26 though 1 day over 30 would require fewer days.

(4) The last Confirmation Events occurred after the August 2007 Trigger Event which ushered in an Unstable VIX Pattern lasting until September 2012.

This is what the November 2007 Confirmation Event looked like:

(7) The restart of the SVP count can occur without a Confirmation Event when the movement in the Vix is inconsistent with the SVP formation. In the past the characteristic pattern of the UVP was clearly evident and no judgment was required on this issue.

That movement would require more days of movement over 20.

The period after the October-December 1997 Trigger Event is an example.

The Recovery Period started in February 1998:

By late March 1998, that Recovery Period was clearly over with 19 consecutive days of movement above 20. The VIX did not close over 26 in that period. That movement required a restart of the SVP count.

Another Recovery Period started on June 26, 1998 and lasted only 16 days before the VIX returned to over 20 movement.

(8) A typical pattern is that a Confirmation Event starts with a spike in volatility.

I would note the VIX movements shortly before the November 2007 Confirmation Event, which showed a clear end to the Recovery Period:

Bond purchases are not subject to the VIX Model's trading rules.

1. Sprinkling Money Around on a Major Down Day: I referred to these purchases earlier as more of a raindrop that hopefully will not turn into a bird dropping splashing down on the Old Geezer's forehead and dripping downward to a place that it does not belong.

A JPM strategist recommends selling the rallies now. A more detailed article on that recommendation can be found here: Bearish J.P Morgan says sell stocks on any rally - MarketWatch

RBS is saying sell everything other than high quality bonds. The Guardian That sounds more like hyperbole to me than sound investment advice. I guess they can see the future better than mere mortals.

Lastly, the Société Générale global strategist, Albert Edwards sees the S&P going below that delightful 666 number which was the intra-day lowest low during the Near Depression period. I am surprised only that Edwards still has a job.

Based on my VIX Model, my views about valuation and the outlook for profits over the near term, and other factors, I pared my stock allocation during the rally to 2100 off the August lows. Now, I am gingerly buying the dips focusing on income producing securities. As prices go down, yields go up.

For as long as the Unstable Vix Pattern ("UVP") continues, selling the rips and buying the dips can be a viable trading strategy based on historical movements of the VIX during that kind of pattern.

I just started a position in SFNLX when the market started to tank. I am gradually replacing a 100 share position in the Schwab US Dividend Equity ETF (SCHD), sold at $38.98 (10/27/15) and bought at $27.36 (3/1/12). The SCHD transactions occurred in a trust account before those assets were distributed to me.

Those ETFs have been hitting new 52 week lows.

Except for the EWS purchase, the remaining funds were bought with cash flow (i.e. recently received cash dividend and interest payments). A cardinal rule here at HQ is that incoming cash that is not necessary to pay current expenses must be used to buy income producing securities, no matter what my opinions may be about the markets, the economy and anything else.

When the market continued to slide last Friday (1/8), I made the following stock investments: $50 to SFLNX, $100 to an inherited mutual fund; 5 shares in a low cost Schwab international ETF; two REIT purchases (discussed in my last update) and one regional bank stock.

I focused on stocks down more than their respective sector ETFs. I averaged down on a REIT and a recently purchased regional bank stock.

I will hold off buying for a few days, possibly a few weeks, when and if there is a decisive break below the August 2015 lows in order to assess the reasons for the break-down (emotionally or fundamentally driven; a market event caused by programs, HFTs, etc. or a longer term directional change in the market, all probability opinions formulated based on what is known and best guesses about the future)

I would just emphasize that some are certain now that the August lows will be breached in a downward spiral into a black hole of destruction, but those preachers may be served a cold dish of humility in the end.

I partly financed the purchases last Friday by selling 50 shares of SDS that were recently inherited, with those shares bought between days 18 to 22 of the Recovery Period like the other SDS shares that I currently still own.

I may finance some more small purchases with my remaining 130 SDS shares (not much of a hedge, but I hate that product passionately and will not change my cash accounts to allow for shorting and option trading)

If and when VIX readings return to below 20 readings over a several day period, I will consider reducing my stock allocation and buying back any SDS shares previously sold during a VIX spike into the high 20s or low 30s.

Disclaimer: I am not a financial advisor but simply an individual investor who has been managing my own money since I was a teenager. In this post, I am acting solely as a financial journalist focusing on my own investments. The information contained in this post is not intended to be a complete description or summary of all available data relevant to making an investment decision. Instead, I am merely expressing some of the reasons underlying the purchase or sell of securities. Nothing in this post is intended to constitute investment or legal advice or a recommendation to buy or to sell. All investors need to perform their own due diligence before making any financial decision which requires at a minimum reading original source material available at the SEC and elsewhere. A failure to perform due diligence only increases what I call "error creep". Stocks, Bonds & Politics:ERROR CREEP and the INVESTING PROCESS. Each investor needs to assess a potential investment taking into account their personal risk tolerances, goals and situational risks. I can only make that kind of assessment for myself and family members.

81 Comments
To ensure this doesn’t happen in the future, please enable Javascript and cookies in your browser.
Is this happening to you frequently? Please report it on our feedback forum.
If you have an ad-blocker enabled you may be blocked from proceeding. Please disable your ad-blocker and refresh.