Over memorial day holiday, I was reseraching the military service records of two lineal ancestors (father and son) who fought in the Revolutionay War under the command of General Nathanael Green and were present at the Battle of Eutaw Springs.

Another interesting fact is that they were part of a pre-revolutionary war militia that fought against the Cherokee Indians who frequently raided their settlements along the western North Carolina frontier.

The Cherokees were allied with Britain who had entered into a treaty with them prohibiting the colonials from settling past the Blue Ridge Mountains which was ignored by the colonials and consequently set off a series of skirmishes along the fronteir prior to the Revolutionary War. In one of those skirmishes, occurring in July 1776, my 5th great grandfather lost his arm. I am curious whether they were fighting the British for the same reasons as the Founding Fathers.

My net realized gain in this basket strategy currently stands at $26,638.66 (small lot trades): REGIONAL BANK BASKET STRATEGY GATEWAY POST I started to build this basket in the 2009 Spring.

Snapshots of round trip trades can be found at the end of that post.

Over the life of this basket strategy, I anticipate that dividends will generate about 40% of my total return. Over the past 4 years ending 12/31/15, dividends have averaged $1,939.37 per year.

The dividend yield of this basket is significantly in excess of the yields provided by regional bank ETFs that include a large number of low yielding stocks and several that pay no dividends.

Charge-offs for regional banks are near historical lows in the aggregate and NPL's are trending below 1% for the banks that I will buy as part of this basket strategy. Loans and deposits are increasing at favorable percentages. The problem remains NIM contraction.

FRB: FEDS Notes: Why Are Net Interest Margins of Large Banks So Compressed?

Net Interest Margin for all U.S. Banks (abbreviated to "NIM")

Net Interest Margin for U.S. Banks with average assets under $1B

Net Interest Margin for U.S. Banks with average assets between $1B and $15B

Return on Average Equity for all U.S. Banks (abbreviated to "ROE")

Return on Average Assets for all U.S. Banks (abbreviated to "ROA")

Nonperforming Loans (past due 90+ days plus nonaccrual) to Total Loans for all U.S. Banks (abbreviated to "NPL Ratio")

Charge-Off Rate On All Loans, All Commercial Banks

Rationale for Purchases Discussed Below:

The market does not care about the relatively low P/E ratios for the 4 stocks discussed below, as shown by the lackluster price action and low trading volume.

Sure, earnings growth has been a struggle for small banks due to a long period of NIM contraction.

And, it is understandable that the foregoing will cause many investors, who may have heard of these four banks, to look elsewhere for earnings and dividend growth. The assumption being made, which may prove erroneous, is that NIM will remain under pressure for the foreseeable future. Things do in fact change.

In a more favorable operating environment, I would expect some modest dividend growth except for Carter Bank & Trust (CARE) which is unlikely to raise its dividend irrespective of earnings growth IMO.

The Bank of South Carolina (BKSC) was growing earnings, revenues and depostis Y-O-Y, but E.P.S. was flat in the March 2016 quarter Y-O-Y.

All 4 stocks have dividend yields in excess of 3% at my purchase prices. 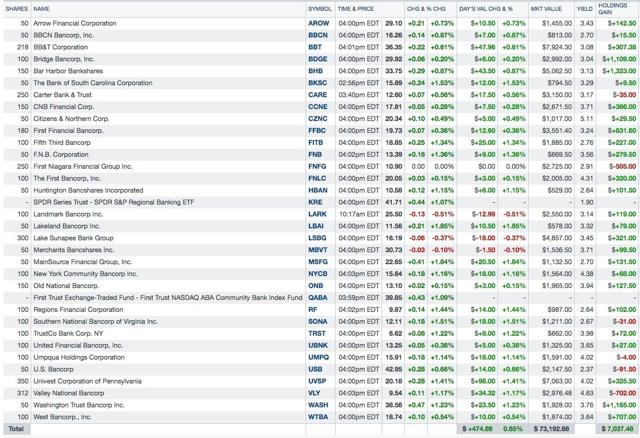 Yahoo Finance did not accurately compute my gain for the reasons discussed in the Appendix section below.

I am not tracking shares bought with dividends in this table. Any profit or loss realized from those shares would be included in the broker calculations of realized loss and gains.

United Bank has 50 branches located in Connecticut and Massachusetts.

11/23/2013 Article: Rockville Bancorp-United Financial Merger Should Be a Winner - Barron's

Dividends: The current quarterly penny rate is $.12 per share. The last dividend increase was from $.1 effective for the 2015 first quarter. At that rate, the yield is about 3.7% at a total cost per share of $12.98.

The dividend has not been cut: UBNK Dividend History

The earnings report for both the 2016 and 2015 first quarters had unusual items:

Apparently this report caused Piper Jaffray to downgrade the stock to neutral from overweight with a $14 PT. I would not be that pessimistic. With a modest NIM expansion, a more realistic 12 month PT would be $16 IMO.

Several financial metrics, including ROA, ROE and efficiency ratios, are being impacted slightly by unusual items:

The NPL and NPA ratios are good and are not impacted by those items.

The capital ratios are okay but are near or at the bottom of banks in my basket:

I regard this bank as a potential acquisition target.

One Year Chart: BKSC Interactive Stock Chart (erratic mostly within a $15.5 to $16.5 channel over the past year with numerous brief spurts above and below that channel)

I sold that lot in my regional bank selling tsunami that started in the 2015 Spring, when I cut my allocation just about in half:

The bank's South Carolina market share for deposits was just .46% and at 3.35% in Charleston country.

The Bank of South Carolina did not participate in TARP, which I view positively.

Given its small size, this bank would be a mere morsel for a large banking institution who wants to expand in the Charleston, S.C. geographic area which is a good area for an expansion. I would not base an investment decision based solely or even largely on that possible outcome.

Dividends: The current quarterly dividend is $.13 per share. Dividends

The earnings release is very brief for this micro cap bank holding company.

More information is provided in the Annual Report: 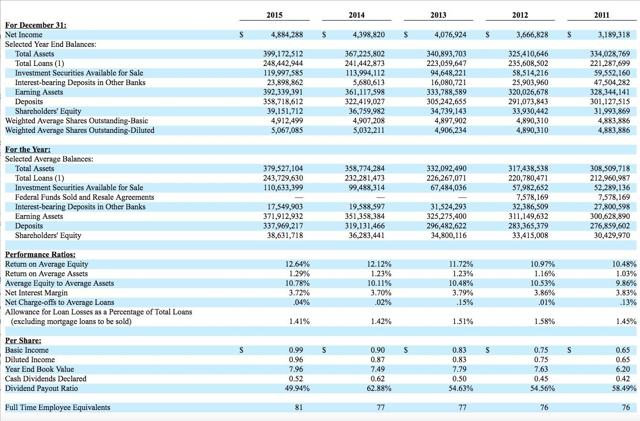 The growth rates are good in deposits, loans and net income. 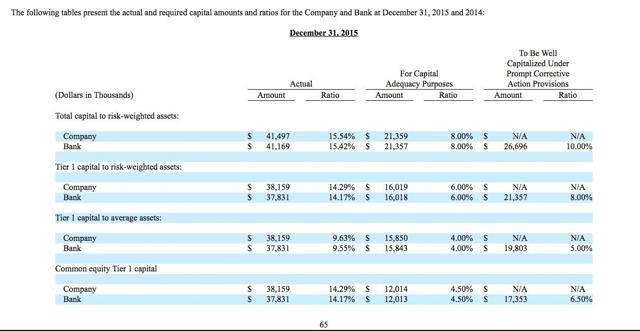 CARE does what it can to be as invisible as possible to the investor community and consequently this stock is selling at the lowest TTM P/E of banks in my basket.

Company Description: The stock of Carter Bank & Trust (Martinsville VA) is lightly traded on the pink sheet exchange. Carter was created by the merger of 10 banks back in 2006. Carter operates 123 branches in Virginia and North Carolina: Carter Bank & Trust, FAQs

The headquarters is located in Martinsville, Virginia.

At a $12.6 market price, the market capitalization is about 317+M; the P/B is .77, and the TTM P/E is 8.47. CARE Key Statistics This bank has no analyst coverage. This stock is mostly invisible and is lightly traded. CARE Historical Prices

Carter does not file reports with the SEC. Instead, the bank opts for the apparently less costly filings with the FDIC using the SEC forms.

As of 12/31/15, this small bank had $362M in excess reserves at the Federal Reserve Bank and intends to deploy "a portion" of those reserves and maturing securities into other investment securities as the FED raises interest rates.

It appears that the bank has positioned itself for a rise in interest rates.

As far as I can tell, the company has never made an analyst presentation.

CARE may have the oldest Board of Directors of any public company and several directors own a lot of stock. 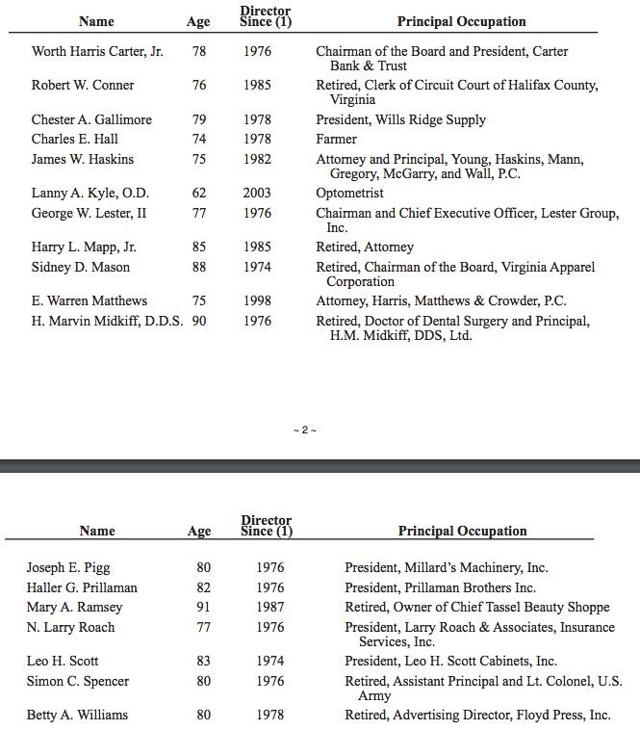 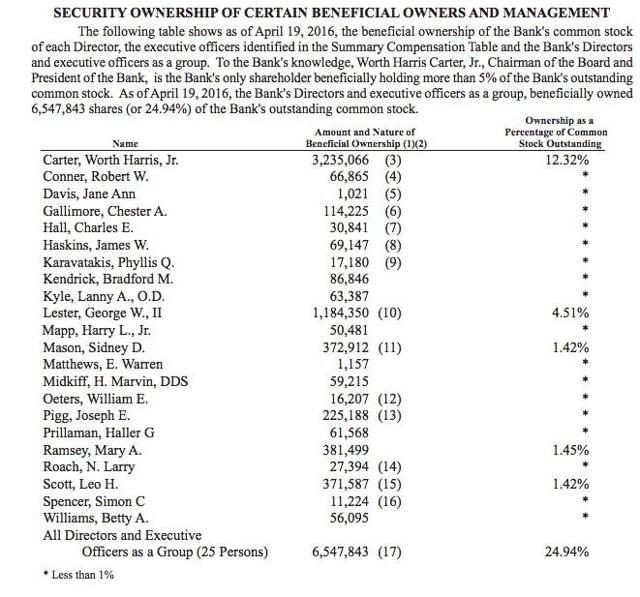 The bank's CEO complained about the onerous operating envirnoment in a letter to shareholders: 3/31/16.pdf He was referring to government regulations and the low interest rates. He noted that net interest margins continue to decline, and it "is extremely difficult to earn a reasonable profit at these interest rate levels". As a result, the bank has allowed securities to mature and then placed the proceeds "in short term deposits at the FED in anticipation of rates increasing". The bank's loan to deposit ratio is extremely low at 55% as of 3/31/16. Excluding the $405M in municipal loans, the loan to deposit ratio would be 49%, "an even more conservative figure". All of the bank's deposits come from their "customer base". The bank has no "brokered deposits". Loan growth is increasing according to the CEO, but many customers are "still struggling".

Perhaps, CBs need to read that letter to become enlightened about how their abnormal monetary policies actually impact bank lending.

These capital ratios are low compared to other banks in my basket.

4. Added 50 CCNE at $17.75: This purchase was made in the ROTH IRA where I occasionally flip regional bank stocks. The other 100 shares are owned in two taxable accounts with the oldest position bought back in 2010.

Dividends: CCNE is currently paying a quarterly dividend of $.165 per share. CNB Financial Corporation As shown in that history, it is laudable that CCNE has not cut its dividend and has raised the rate periodically after starting off with a $.037 quarterly penny rate in 1991. It is a negative that the rate has not been raised since it was bumped from $.16 effective for the 2008 4th quarter.

At that penny rate and assuming a total cost per share of $17.75, the dividend yield is decent at about 3.72%.

CCNE went ex dividend shortly after my purchase as noted below.

Company Description: CNB Financial is the bank holding company for CNB Bank that has combined 29 branches in Pennsylvania and 9 branches in central Ohio. Those branches include CNB Bank and the FC Bank and the ERIEBANK divisions. CNB is in the process of acquiring Lake National Bank in Mentor, Ohio that has two full service branches. The bank also owns Holiday Financial Services Corporation, a "consumer discount loan company", with 12 offices: Investor Presentation 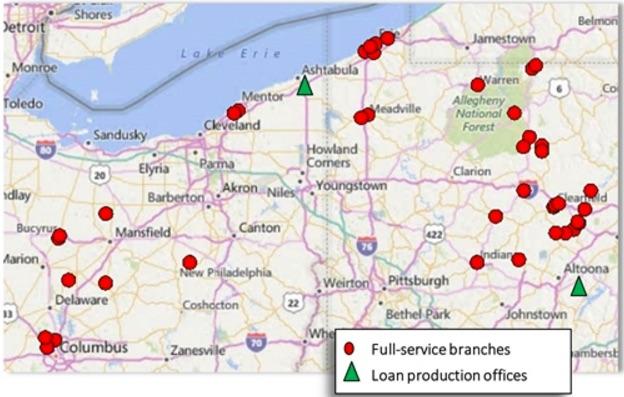 The market capitalization at my purchase price is about $257+M. The bid/ask spread is typically wide, so I always use limit orders. The price has to come to me. CCNE Historical Prices

I mentioned above that YF did not properly calculate my gain based on last Friday's closing prices.

The issue arises in the accounting for stocks that went ex dividend last Friday.

Yahoo Finance shows that my CCNE position was up $.05:

The shares closed at $17.76 the previous day, so the five cent gain appears correct.

However, CCNE went ex dividend for a $.165 per share quarterly distribution which means that the acutal gain was $.215 based on the prior day's closing price adjusted for that penny rate.

Marketwatch has the correct gain, giving them latitude for rounding up $.215 to $.22: 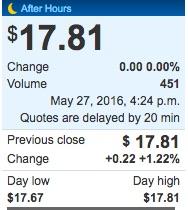 The same issue is present with both ONB and FFBC as well: 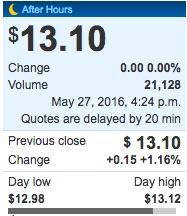 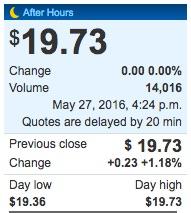 Disclaimer: I am not a financial advisor but simply an individual investor who has been managing my own money since I was a teenager. In this post, I am acting solely as a financial journalist focusing on my own investments. The information contained in this post is not intended to be a complete description or summary of all available data relevant to making an investment decision. Instead, I am merely expressing some of the reasons underlying the purchase or sell of securities. Nothing in this post is intended to constitute investment or legal advice or a recommendation to buy or to sell. All investors need to perform their own due diligence before making any financial decision which requires at a minimum reading original source material available at the SEC and elsewhere.. A failure to perform due diligence only increases what I call "error creep". Stocks, Bonds & Politics:ERROR CREEP and the INVESTING PROCESS. Each investor needs to assess a potential investment taking into account their personal risk tolerances, goals and situational risks. I can only make that kind of assessment for myself and family members.