This bond was purchased to illustrate the process of how to buy a TIP in the secondary market. This is not going to be easy to explain so the reader has to be in a non-drug induced state and mostly alert.

I will use Vanguard to buy treasuries where I do not pay a brokerage commission to buy either at auction or in the secondary market. It is easy to find TIPs with a particular maturity date at Vanguard's website.

I decided to buy one of two TIPs maturing in 2019.

I first looked at the following quotes for these two bonds shortly before purchase:

The order was placed shortly before the bond market closed early today for the Memorial holiday next Monday The sell offers had disappeared a few minutes before I placed a buy order for 1 bond.

I will get back to the important information in this quote including what is called the inflation "factor" of 1.11512, which impacts what I end up having to pay.

Why am I paying more in principal than the quoted price?

In effect, the quoted price is adjusted by the then current principal amount of the note which is not $1,000 anymore. The benefit of a TIP is that the principal is adjusted, both up and down, by the inflation rate.

The original $1,000 principal amount has been increased by the CPI rate up to the 5/31/16 settlement date. The amount of that increase is the inflation "factor" applied to the quoted price.

I have to pay the seller for that accretion in principal since issuance in 2009, which is $124.24 using the inflation factor. I will get that back and more when the bond matures. In making that last statement, I am making a reasonable assumption that the inflation adjustment will continue to increase the principal amount until maturity.

Still I need to make up another $79.21, based on the quoted price, before I break-even and avoid losing money by holding to maturity. If I had significantly more than 3 years and 45 days until maturity, that would be a snap.

I can realize a positive return by a combination of subsequent principal accretion through inflation and interest payments at the 1.875% coupon rate on the adjusted principal amounts.

I am not going to bother calculating the increased income due to the 1.875% coupon being applied to a higher principal amount. Instead I just asked myself how much more principal would I receive with inflation rising 6.5% until maturity (.065% x. 1,124.24= $73.08)

So now I am in the green with that inflation assumption by $59.75.

All of those numbers changed slightly in my favor due to my fill being at a slightly lower price. Lower is better.

The price will frequently change somewhat before the order finds the dealer. If the price moves higher, then the order will be canceled in what is known as a "fill or kill". The time period for the "kill" is a few minutes. The price may also decline in which case the buyer will receive the lower price, just like a limit order for a stock.

Yellen was talking when I placed the order and the Bond Ghouls did not like what she was saying apparently. Yellen says a rate rise in coming months is probably appropriate MarketWatch The price drifted down in the few seconds it took to find the dealer providing the quote.

I believe that it is more likely than not that my return will beat the 1.06% yield of the three year non-inflation protected treasury as of 5/27/16. Daily Treasury Yield Curve Rates I roughly calculate that yield would produce $33.13 in income over the same period per 1 bond.

With my inflation assumption of 6.5% over 3 years and 45 days, I am better off buying the TIP today rather than the nominal non-inflation protected note. If the inflation adjustment is only 3%, then I am no better off. Less than 3%, I am starting to be worse off. Greater than 6.5% cumulative, I am moving further into better off with the TIP. In whatever happens, it is irrelevant to me. Needless to say, the income and total return from these securities is ridiculously low.

The inflation factor for each TIP can be found at the treasury's website: Institutional - TIPS/CPI Data 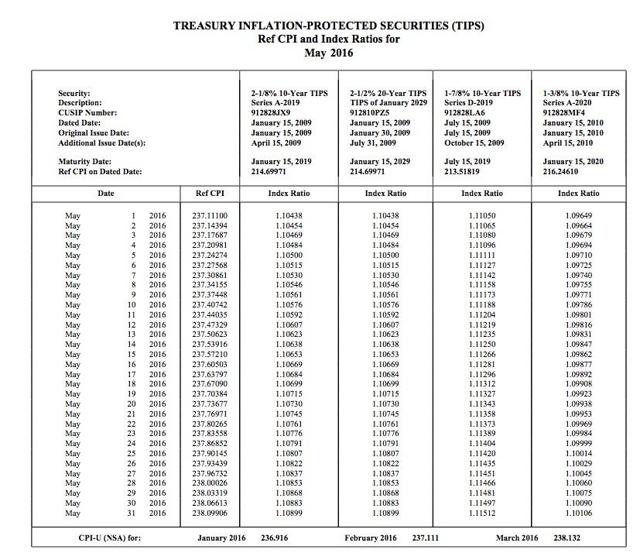 The CPI data used is the non-seasonally adjusted index for all urban consumers: DATA

In the foregoing, I am simply explaining my simpleton understanding.

That highlights a risk when buying in the secondary market and paying a premium to the accreted par value. That buyer has not fared well, but I did extremely well.

I would only buy TIPs in retirement accounts due to tax considerations. Individual - TIPS: Tax Considerations