We're still not sure if it was a fat finger trade, a terrorist attack, poor plumbing or an attempt to stop massive selling in a household name, but the flash freeze that halted trading in NASDAQ stocks was just another wacky reason for people to not have confidence in the market. I've seen the $250 million building in New Jersey with no signs, high walls, and very little traffic that is suppose to handle a doomsday scenario, so I'm not surprised these things happen but wish there was more transparency and honesty-we will never know what happened yesterday.

I can only hope it doesn't deter even more would-be investors. By the same token, it would be nice to reel in all the antics of the big boys picking up piles of pennies that add up to billions without breaking a sweat. If they had to run in front of steamrollers for those pennies that would be fantastic, but they collect them while chilling on the beach in the Hamptons. All those trades and all that technologic al prowess to pick off orders from regular folks means more and more piping and speed without caution signs or speed bumps. It means pile ups that result in the system being down for a couple of hours.

I'm not sure if it's a good thing or a sign of apathy that the market rallied after the latest mishap of a major exchange. I'm glad we didn't crash but wonder if we have become a nation okay with broken government, broken promises, broken dreams, and broken institutions. In the meantime, the economic realities were revealed in this week's retail earnings results and guidance. On Monday morning, I said this week would be about retail and it has been, sadly. Teen retailers suffered most, but then again thus far zero net summer jobs have materialized for the 16 to 19 year old segment of the population.

By the same token we saw some winners, underscoring that even a weak $16.0 trillion economy offers chances for winners and losers.

There is one retailer that's not public yet but is an amazing winner and a reminder of the greatness of America, belief in God, and embracing the evolving cultures that make up our melting pot. These days, however, the company is the target of those that don't understand capitalism, or understand it but don't appreciate it.

In 1981 Do Won Chang arrived in Los Angeles from South Korea; he was 27 years old and eager to embrace the land of milk and honey. Three years later he and his wife opened a 900 square foot store selling trendy Korean styles to locals. I'm sure their faith as Christians helped them overcome early obstacles as their gratitude is reflected with John 3:16 printed on every shopping bag at Forever 21. This week the company with 27,000 employees became a target because of this memo. 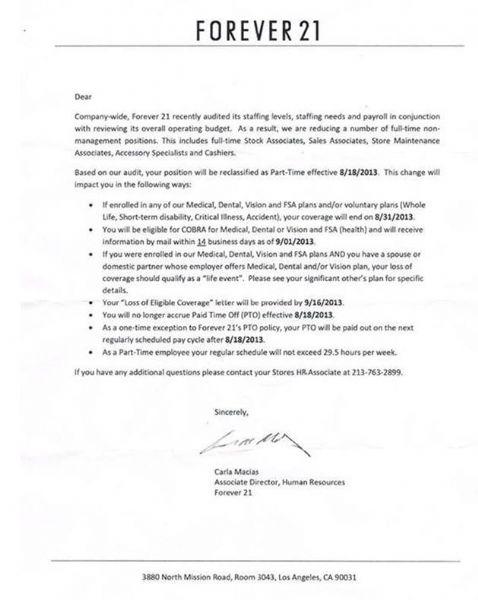 Retailers have to cut hours to address Draconian rules of the new healthcare law. Even though the employer mandate was pushed off a year, many businesses continue to execute previous plans. It's not just businesses, however. The University of Virginia is cutting out spouses from coverage, just like UPS which will save $62.0 million. Nonetheless there has been a call to boycott Forever 21, which I suspect will fall flat like all boycotts rooted in envy and hate.

The fact is the owner and his wife are now worth $4.0 billion, and those that think that wealth only came from public roads want them to share the wealth even more than the thousands of jobs they've created.