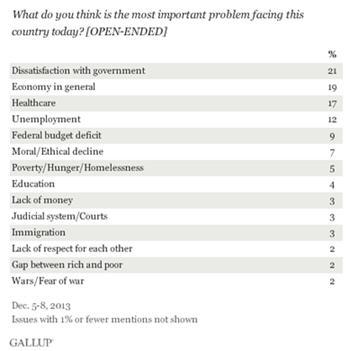 "What's Eating Gilbert Grape-" was a quirky movie that didn't do much for me, but my daughter loved it. The movie is about a dysfunctional family living in squalid conditions that had the typical Hollywood overtones of anti-corporatism and small -town hopelessness. As it turns out, there are a lot of things bugging the American public these days, but not what the media or the Hollywood elite continuously promote onscreen and in real -life.

According to a recent Gallup survey, dissatisfaction with the government tops the list as the most important problem facing this country today. I'm sure the spin masters would say that's directed at the mean old Tea Party and the GOP who's always saying "no." But I think in light of the next four replies, this is a problem that begins at the top of the food chain.

* Fiscal policy is decidedly anti-success; while the schemes and regulations, coupled with higher taxes, has weighed down natural impulses that typically result in robust recoveries.

* People shouldn't be worried about healthcare at this stage of the new law that promised to bend the cost curve and add a layer of economic comfort.
* Unemployment is so awful, even fiscally prudent Republicans and those lawmakers that understand the harmful aspects of unlimited benefits, will vote to extend them anyway.

* The federal budget deficit is a real-life ticking time bomb. It only has to blow up once to erase the implied promise of a better tomorrow for our children.

I think the moral and ethical decline should rank higher, because the implications for fixing all those concerns ranked higher. The greater the moral decay, the more emboldened Washington DC is at spending money and evading the Constitution. I'm also surprised that education wasn't ranked higher, as it's the true path toward alleviating the lack of money, and thus creating a gap between the rich and poor. When government gets out of the way the top five worries will be mitigated. It's really nuts when we consider that the power of voters can make this all better.

Americans don't hate each other, although it has been the mission of politicians and the media to stir the pot. Demonization is the only thing these folks have perfected. I can't watch a movie without seeing the demonization of capitalism, Republicans, God, and money being tossed around in the first five minutes. Part of that is to deflect from the gigantic salaries that producers and actors make, whether the movie is a bomb or not, but it's also the knowledge that the less we believe in a higher power and the more we fear our neighbors, the more likely we are to accept bad government.

Despite it all, we are worried about the right things, but we are not taking corrective action to fix the source(s) of our concerns. In the end, the nation doesn't have to be like that dysfunctional family in the small town where forces beyond their control limit their options and shape their lives.

We are very myopic about the market, almost to our own detriment as investors. The Dow climbed about 10,000 points off the low, so hiccups are the least we should expect from time to time. Still, there's the lingering question about the Federal Reserve. I for one will be thrilled when they slow down asset purchases and then completely stop. I'll be over the moon when they actually hike interest rates; that's not going to happen anytime soon , but tapering could occur this month, although this is probably a major decision the new chairman will inherit.

In the meantime, a clear trend is in place-and it's a red flag. It's always about how the market closes that matters and right now; it's plunging into the close. There still isn't a lot of panic, even with the VIX moving higher. I think this is more about a market shakeout and at some point; it will test the resolve of investors who currently think they're firm holders. I'm not sure how much the two-year budget is affecting the market. We were told that getting rid of uncertainty in Washington would unleash the market, but that's not the case with this paper-thin deal.