InTheMoneyStocks.com was established in 2007 with the goal of helping average investors compete and beat the Wall Street elite. Founders, Gareth Soloway and Nicholas Santiago spent years (prior to launch) developing the PPT Methodology, a simple way to analyze charts (stocks, commodities, forex, crypto… ect), finding the next directional move with a proven 82% success rate (94% for day trading). With tens-of-thousands of members since their launch in 2007, and many hedge fund clients, InTheMoneyStocks.com is now a household name with investors and traders all over the world. InTheMoneyStocks is one of the oldest proprietary trade alert firms on the internet, which shows the long lasting positive and profitable impact on the lives of our members. We pride ourselves on being transparent, open and honest, not only giving our live trades to our members, but teaching them how to analyze charts and learn how to find the next market cycle via the PPT Methodology.

Since yesterdays highly anticipated FOMC meeting the major stock indexes are soaring. As you all know, the Federal Reserve said that they will continue their current $85 billion a month QE-3 program. The current QE-3 program is where the central bank buys $45 billion in mortgage backed securities (MBS) and another $40 billion in U.S. Treasuries every month. The Federal Reserve also has the fed funds rate at zero to a quarter percent, it has been at that level since December 2008.

So what will cause the Federal Reserve to taper the current QE-3 program? Obviously, the central bank tells us that there is very little inflation in the economy so there is really no danger to having the QE-3 program in place. History has told us that prolonged stimulus has resulted in high inflation or some type of bubble. In 2001, the former Federal Reserve chairman Alan Greenspan lowered the fed funds rate to 1.0 percent and that lead the stock market to new all time highs. Unfortunately, it also lead to the largest housing and credit bubble in seventy years. Could there be another bubble being created at this time, or is this time different? After all, almost every central bank is following the lead of the Federal Reserve when it comes to easy money policies. The Bank of England, Bank of Japan, and many other central banks are all creating money out of thin air so perhaps this time it is different.

If the bond market is moving higher it is telling us that the Federal Reserve is going to need to taper their current QE-3 program very soon. If they do not taper soon then they are risking another bubble or perhaps massive inflation. The Federal Reserves balance sheet is now around the $4 trillion level, so perhaps that is the next bubble to burst. Either way, everyone should keep an eye on the bond market as it always tells us what is really happening before it does. 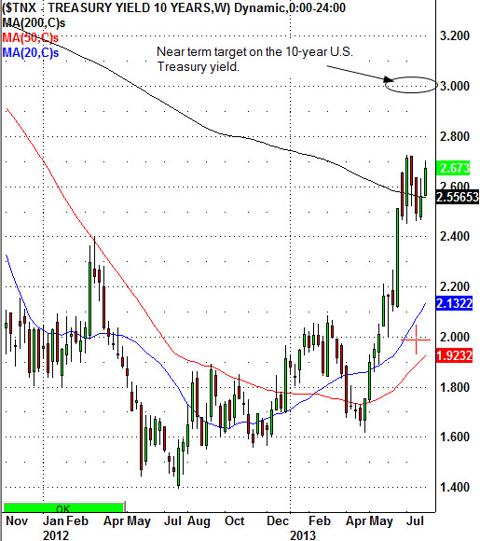