The photo was taken at the Beijing Airport. Expensive chocolate gift boxes commonly line the isles of airport shops in China. 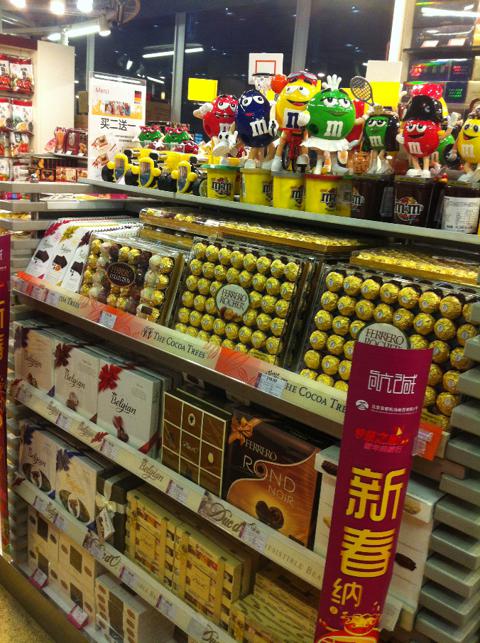 Statistics mislead, and even readers who are familiar with China may not understand its contradictions. China is a poor country yet boasts the world's 2nd largest economy. Its GDP per capita is a paltry US$5,400 but China consumes the largest number of 7 series BMW's, luxury watches, and other expensive goods.

Three decades ago, China consumed virtually no chocolate, and it took years for M&M Mars, Ferrero, Kraft and others to create the market. Chocolate consumption growth is sustained by aspiring, middle-class consumers, and today China's candy/confectionary market - at roughly US$10 billion - is the most important in Asia. China's increasingly affluent consumers spend a lot of money on gifts. Chocolate is now a common holiday gift item for Valentine's Day, Chinese New Year, and even Christmas. 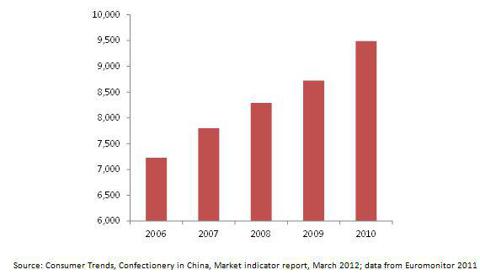 M&M Mars dominates chocolate in China with a market share of around 40%. The firm sells a number of well-known brands including Dove, M&M's, and Snickers. Other important market players include Nestlé (11% share), Ferrero (9%) and Hershey's. Only one Chinese domestic firm produces and markets chocolate in any meaningful way. COFCO (中粮), China's state-owned grains and edible oils company, has a 5% market share selling Le Conté branded chocolate. Luxury chocolatiers are springing up in many of the fancy malls in first-tier Chinese cities such as Shanghai and Beijing. Among them, Godiva believes that China is one of the company's most important markets.

When it comes to manufacturing, M&M Mars was a first-mover who began producing chocolate in China in the 1990's. Today it is the leading player in an industry that is growing at double-digit rates. Other firms have followed suit. The Japanese began producing in 2006 when Meiji, which previously exported chocolate from Japan, opened a production plant in Shanghai. In 2007, Hershey's joined forces with Korea's Lotte to produce products in China. One year later in 2008, Barry Callebaut of Switzerland, one of the world's largest chocolate firms, built its first Chinese plant in the city of Suzhou.

What makes China attractive is that the country's confectionary growth rate has been 10% (compared to the global average of 1-2%). Factoring in the very low per-capita consumption of chocolate in China, the growth story gets even more interesting. According to an old report by the International Cocoa Organization, China's annual per capita consumption rate for cocoa beans was 30 grams (0.03 kg) a few years ago. The Association of Chinese Chocolate Manufacturers later put the figure at 70 (0.07 kg). Other, more recent statistics have China at 100 grams (0.10 kg). 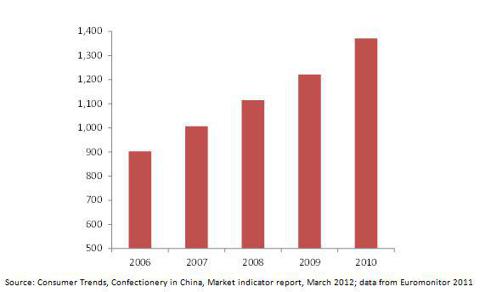 In terms of cocoa grinding/processing, China is not an important player. The country's cocoa processing industry began modestly. In the 1980's, less than 10,000 beans were imported and processed annually. Beginning in the 1990s, with Chinese government incentives encouraging manufacturing, China developed a small domestic cocoa grinding/processing industry. Despite these efforts, China today processes a paltry 40,000 - 50,000 tons per year. Several large multinational trading firms import beans to China. Also (interestingly), a Chinese firm called Genertec (China General Technology Group) imports beans from Africa. Genertec is a Chinese conglomerate whose engineering branch has been building projects in Ghana for several years. In partial payment for its services, the government of Ghana pays Genertec in cash as well as cocoa beans. In 2008, the firm imported 20,000 tons of cocoa into China.

Because Chinese cocoa processors are small, they cannot compete against larger firms in Asia. In the past Chinese import tariffs protected the local companies. However, changes in China's import policies allowed chocolate products from Malaysia and Indonesia to enter without paying duties. Given the sophistication and scale of their global competitors, Chinese domestic producers face enormous profitability challenges. Adding to this pressure, Beijing began cracking down on domestic cocoa processing firms in 2008 due to allegations that Chinese cocoa processors had not been producing according to official standards (i.e. not peeling cocoa shells before processing). Today there are 5 main cocoa processing plants in China: 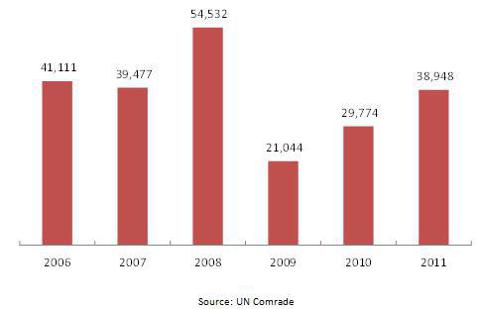 A recent report by Euromonitor, estimated a 2012 growth rate for chocolate confectionery in China at 13%, making the country one of the world's growth leaders. Partially because the country has such a large population and is starting from a low base-line, experts believe that China's growth will remain in the double digits for a long time. In per-capita terms the opportunities are mind boggling. According to Lawrence Allen, author of Chocolate Fortunes: The Battle for the Hearts, Minds, and Wallets of China's Consumers, "the amount of chocolate sold in China is relatively tiny, accounting for less than 2% of total global consumption. A nation of more than a billion people, it consumes about 146 million pounds (66.5 million kilograms) of chocolate annually, or 1.8 ounces (50 grams) per person." He goes on to make global comparisons, "Switzerland, with a population of less than 8 million, consumes 167 million pounds (76 million kilograms) annually, or 22 pounds (10 kilograms) per person. Americans, by comparison, consume approximately 3 billion pounds (1.4 billion kilograms) a year, or 11.7 pounds (5.3 kilograms) per person annually."

SinoLatin Capital's team did an analysis of the implications of Chinese chocolate consumption growth on the cocoa market. While the analysis is imperfect - anything multiplied by 1.3 billion people tends to skew the data - we believe that if China were at some point to consume just one-half of the per-capita chocolate consumed in neighboring Japan, the implications would be massive. At one half of Japan's consumption, China's per capita numbers would jump from 100 grams today to around 1,100 grams (1.1 kg) per person annually. This increase would mean that China's chocolate consumption would grow to roughly 1.5 million tons. Depending upon what percentage cocoa is used in chocolate, demand for cocoa beans could rise by an additional 250,000 - 350,000 tons per year. 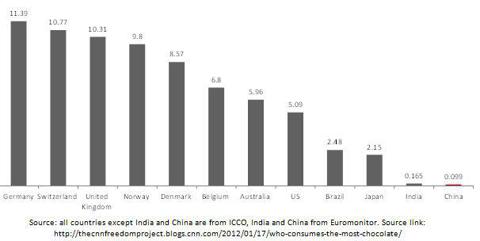 Cocoa is traded worldwide. The product that trades is a fermented, dried cocoa bean (flavor bean or bulk bean). Markets differ by region. In some cases, farming collectives sell to dealers who export globally. In other cases, government marketing boards export cocoa. International trading companies such as Swiss-based Novel and ECOM Trading, France's Touton, and Holland's Continaf, are other important actors.

On the financial markets, cocoa trades through physical contracts or futures on two major exchanges: London (LIFFE - British Pound) and New York (ICE - US Dollar). The market distinguishes between fine cocoa, which commands a premium, and bulk cocoa. Similar to many commodities, the amount of trade on the exchanges could be higher or lower than the amount of cocoa actually produced. In 2012, for example, the amount of cocoa produced was around 4 million tons while the amount that was traded on the New York ICE exchange was almost 6 million tons.

Long-term prices of cocoa are a function of large, tectonic shifts in consumer demand - say in China, or new plantings that won't hit the market for a few years, or crop failure due to disease. In contrast, short-term prices vary considerably. Factors influencing short-term prices include:

From 2007 to 2009, cocoa prices rose significantly. In 2011, a record crop put downward pressure on prices. In recent years, cocoa prices also fell because Ivory Coast, the world's largest supplier, instituted a new forward auction system that resulted in a fall in cocoa futures. Additionally, higher rainfall and a combination of other factors lead to further price drops in the 2011-2012 season. 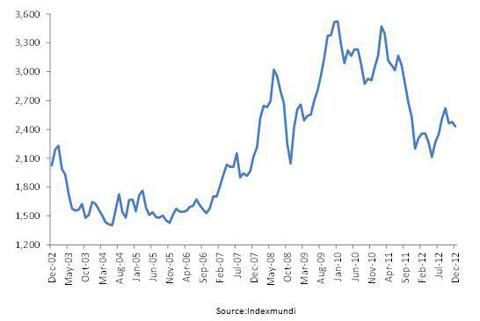 Short-term price volatility is now strongly influenced by commodity hedge fund managers and speculators. As an example, in June 2010, one hedge fund in particular purchased over 200,000 tons of cocoa, causing short-term prices to rise considerably.

Cocoa is unique among soft commodities because it trades in two currencies (US dollar and British pound) and on two separate markets. Many hedge fund managers trade cocoa specifically because of its relationship to currencies. Currency arbitrage provides fund managers another means of making money in addition to cocoa's fundamentals.

According to the United Nations FAO, cupuaçu cultivation is concentrated in the Brazilian state of Para. It is also grown in other Brazilian states such as Acre, Amapá, Amazonas and Rondônia. In recent years, cupuaçu has been introduced to other regions in Latin America with a similar climate to that of Brazil including Venezuela, Ecuador, Peru and parts of Central America.

Similar to cocoa, cupuaçu has been consumed by Amazonian indigenous people for millennia. In modern times, cupuaçu has been used commonly in Brazil for making desserts, ice cream, jellies, and juices. In Brazil, cupuaçu isn't as exotic as it may appear to outsiders. Packaged, frozen pulp is found in most of the country's supermarkets.

The cupuaçu fruit needs 5-6 years to ripen and it looks different than the cocoa pod. It is a brown, hard, fuzzy, and melon-shaped. When ripe, the fruit weighs 1-2 kilograms (2.2 - 4.4 lbs). When the fruit is cut open, the aroma is said to resemble bananas, pineapple and bubblegum. Inside of the fruit is a white pulpy substance and 25-50 seeds in several rows. 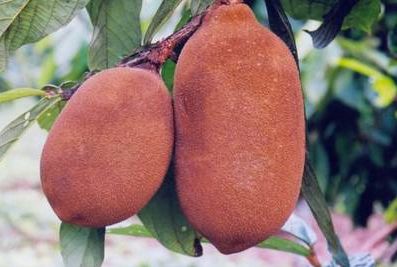 Similar to cocoa, cupuaçu beans are acidic. Yet, by processing them in a similar fashion to cocoa, they can be made into chocolate as well as a chocolate-like beverage in Brazil known as cupulate. One of the main differences between chocolate made from cupuaçu and cocoa is that cupuaçu tastes milder. Another important distinction is that cocoa contains mood-enhancing chemicals (i.e. stimulants) known as xanthines (which include theobromine, theophylline, and caffeine). Cupuaçu, however, has a different set of chemicals (theacrines, flavanols, and polyphenols) which produce similar effects, but without caffeine. Cupuaçu has recently been marketed as a possible superfruit. Supposedly, the fruit has a number of antioxidants that boost the immune system. For this reason, nutritional companies are beginning to produce cupuaçu food supplements and pills.

For several years, cupuaçu was at the center of a Brazilian-Japanese controversy because a Japanese firm registered cupuaçu as a trademark. However as of 2008, the trademark dispute has been settled, which led the cupuaçu to becoming a "Brazilian national fruit."

The cocoa industry is complex, volatile, and intersects the two regions our firm knows well: China and Latin America. While it is impossible to know with precision what the price of cocoa will be tomorrow or in the future, it seems clear that demand growth will come from changing consumer tastes driven by higher disposable income within the developing world, principally in China. On the supply side, it is impossible to know what the short-term effects of weather will bring in any crop season. However, the supply of cocoa is plagued by chronically low yields, inefficient logistics, inadequate training and a lack of training. For those investors with knowledge, patience, and a long-term time horizon, cocoa may be a good bet.