The framework for Cautionary Stress Testing, Dividends is detailed in the books Dividend Coverage Analytics (2021) or Debt Management Analytics (2021). Introductory notes are here: https://seekingalpha.com/instablog/471740-raoul-kennedy/5470359-cautionary-stress-testing-dividends-background-notes. For a brief summary here see the Cautionary Tails Framework Notes below.

DISCLAIMER. The content displayed on this Blog is the intellectual property of the Blog author. You may not reuse, republish or reprint such content without the express written consent of the Blog author.
*All Content provided on this Blog is information of a general nature, does not address the circumstances of any particular individual or entity and does not constitute professional and/or financial advice, investment advice, trading advice or any other sort of advice and you should not treat any of the site's content as such.
This Blog does not recommend that any investment should be bought, sold or held by you. Do conduct your own due diligence and consult your financial advisor before making any investment decisions. None of the information on the Blog constitutes a comprehensive or complete statement of the matters discussed or the law relating thereto. This Blog is not a fiduciary by virtue of any person's use of or access to this content. You alone assume the sole responsibility of evaluating the merits and risks associated with the use of any information or other Content on this Blog before making any decisions based on such information or other Content. In exchange for using this Blog, you agree not to hold this Blog, its affiliates or any third party service provider liable for any possible claim for damages arising from any decision you make based on information or other Content made available to you through this Blog.
*This is a personal Blog. Any views or opinions represented in this Blog are personal and belong solely to the Blog author and do not represent those of people, institutions or organizations that the owner may or may not be associated with in professional or personal capacity, unless explicitly stated. Any views or opinions are not intended to malign any religion, ethnic group, club, organization, company or individual.
*This Blog gives no warranty and accepts no responsibility for the accuracy or the completeness of the information and materials contained herein. Under no circumstances will this Blog be held responsible or liable in any way for any claims, damages, losses, expenses, costs or liabilities whatsoever (including, without limitation, any direct or indirect damages for loss of profits, business interruption or loss of information) resulting or arising directly or indirectly from your use of or inability to use this Blog or any websites linked to it, or from your reliance on the information and material on this Blog, even if this Blog has been advised of the possibility of such damages in advance.

CAUTIONARY TAILS FRAMEWORK SUMMARY NOTES. The following notes apply to Dividend Coverage Roundup and Cautionary Stress Testing reports, in particular. Financing obligations (abbreviated FO) combine debt service and dividends because they are paid from the same source: cash flow, defined as net free cash flow NFCF.  Audits include estimation with five principal metrics:
Metric 1. Coverage capacity defined as proportion of outcomes in which company cash flow exceeds its financing obligations (range 0 to 1, where higher values suggest greater capacity, with qualifications); Metric 2. Negative cash flow estimates are proportions of total possible outcomes ranging from zero to one; for example, a value of zero suggests negative cash flow is a theoretical impossibility (i.e. no possible outcomes). Metric 3. Centrality, an estimate of the point which corresponds to bilateral distributional density. Metrics 4 and 5. An alternative coverage metric compares the estimated maximum FO that corresponds to maximum acceptable exposure MAE levels (0.05, 0.10; FO coverage assumed to not be achievable in an "accepted" range of 5%-10% of possible outcomes). Negative estimates suggest inadequate coverage given these specifications.

Qualifications. Estimates are not to be used in isolation and are not forecasts; multiple resources should be consulted for decision-making; estimates are at best rough indicators of what may be possible based on models employed. Data may be based on interim unaudited financial information; results are preliminary as the data and default assumptions are subject to modification to reflect updated information. Results: Imminent default is not necessarily inferred by poor performance, nor do superior results imply absence of default.

Cautionary Approach. Divergent models may be used to describe the same financial process. A default assumption of fat tails is generally made over higher-ranking distributions which may be thinner-tailed; however, estimates derived from thinner tails may also be incorporated in accordance with a principle of erring on the side of caution.
Applicability of Analysis. Firm-level stress testing may aid in assessing exposure within financial institutions, capital markets and investment portfolios, and aggregate results may shed light on the prospects for economic recession and policy countermeasures. Shocks experienced by individual firms may exert impacts on capital markets, financial institution credit portfolios and economic output.

Dividend Coverage Capacity Ranking System.  The tiers are 1, 2, and 3 with rankings from 1.0 to 3.99 (rounded); an estimate of 1.0 suggests the strongest possible performance; estimates of 4.0 and greater fall below the criteria for the top three. To figure within the top 3 tiers, the initial estimates should meet minimum criteria for each of the five individual metrics as follows: Coverage, greater than or equal to 0.50 (range from zero to 1); Negative cash flow exposure, equal to or less than 0.077 (range from zero to 1); Centrality, greater than or equal to 0.098 (i.e. 9.8% of revenues); potential coverage maximum acceptable exposures (MAE 0.05 and 0.10) greater than or equal to 0.05 (i.e. 5% of revenues). The initial estimates (“unfiltered”) are subject to a filtering process which may result in some modifications to the initial rankings. For an example of tiers and ranking: https://seekingalpha.com/instablog/471740-raoul-kennedy/5509407-dividend-coverage-roundup-capacity-tier-finalists-interim-2020;  for a video summary: https://youtu.be/6RyEk-ZZhS8

The table below shows the results for Canadian Natural Resources (CNQ) and PetroChina (PTR) to FYE 12/31/18 and Sasol (SSL) to FYE 6/30/18, followed by a quick interpretation of each category of analysis:

Deviations (NFCF, Revenue Growth*; latest FY vs. prior): Negative values suggest a recent (1-year) worsening because the latest fiscal year’s value has moved below the prior period central tendency. * Zero or near-zero values suggest that the latest values are in line with historical.

Shifting Centrality (NFCF, Revenue Growth; 3-year): Here the baseline for a shift=1, not zero. Smaller values suggest secular deterioration. This category identifies any shift of each company’s own “core” performance* over the latest 3 years.

Coverage 2 (Dividends+Debt Service DDS): Positive (negative) values suggest an adequate (inadequate) cushion to cover DDS. The coverage variable NFCF is compared to the sum of dividends and debt service* (abbreviated DDS or d+ and may also be termed financing obligations).

(*) Notes: Revenue growth is year on year (YoY) percentage change. Debt service is the sum of principal and interest payments (which in some cases may be estimated), The basis for this analysis is spatial, where the central tendency or “core” may also be referred to as “spatial centrality” or simply centrality.

For any qualifications to the analysis, see the notes further below; refer to the separate post titled Dividend Coverage Roundup: Background Notes referenced in the Author’s page for methodological and other details.

The following charts display the data from the table above. Note that spatial centrality is also shown either by a zero (for Charts 1, 2, 3 and 6), or the figure 1 (for Charts 4 and 5).

Chart 1. Dividend Coverage. Dividend coverage may not be comparable across firms as dividends may vary significantly; for some firms the amounts can be negligible. For a more comprehensive estimate of financing obligations (dividends and debt service together), see Chart 6 and qualifications below. 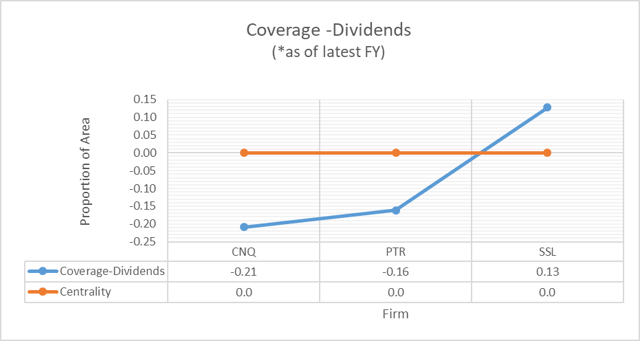 Chart 2 and 3. Deviations (from Prior FY Centrality).

NFCF. Apart from SSL, the most recent fiscal year, net free cash flow NFCF exceeds the firms’ own prior centrality. 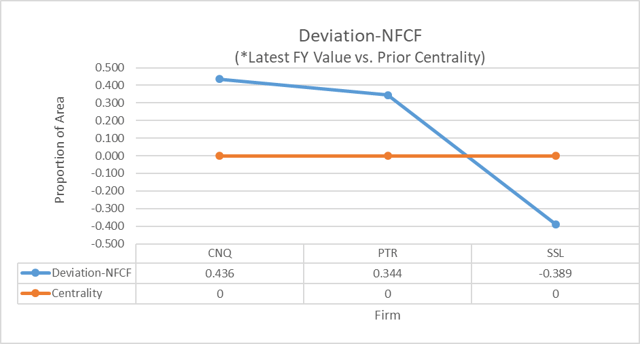 REVG. As of the most recent fiscal year, revenue growth for CNQ and PTR exceeds their historical prior centrality while SSL dipped slightly below breakeven. 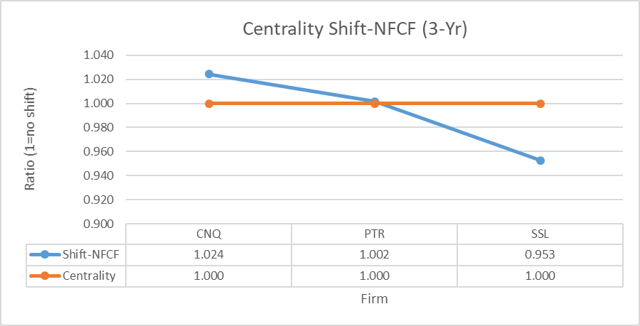 REVG. CNQ and PTR have slightly exceeded or maintained their core of revenue growth, while SSL has shifted downwards to a greater extent over the period to its most recent fiscal year end. 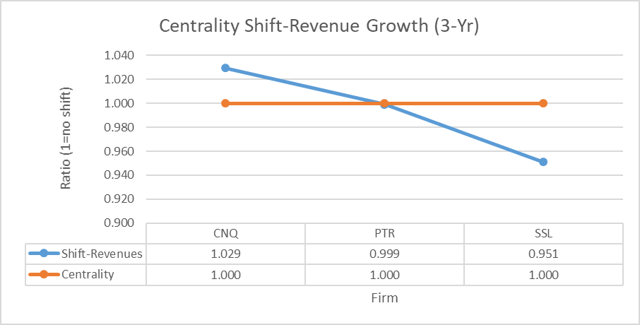 A more comprehensive analysis of coverage requires examination of debt service, detailed in this section. Debt Service is the sum of principal and interest on debt obligations. Adding debt service onto dividends may result in significantly different conclusions about dividend coverage capacity since both compete for limited company funds, with debt service typically being contractual. The chart below shows the relative performance of the firms when coverage is estimated for dividends and debt service combined; the centrality is represented by zero. All firms appear to fall considerably short in coverage capacity; see note and qualifications below for further details. 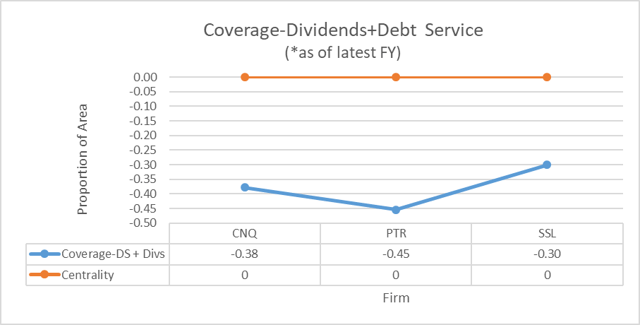 Note: CNQ’s current portion of long-term debt as of FY 2018 was significantly lower than for its scheduled future maturities beyond FY 2018: In particular, debt maturities of 1476 for FY 2018 rise to 5996 for FY 2019.To ignore this large discrepancy in the subsequent fiscal year arguably understates the extent of the company’s debt obligations. Therefore, an intermediate estimate averaging the two fiscal years’ debt maturity figures (FY 2018 and FY 2019) was used instead for a more representative debt service figure.

Methodology and other details are consolidated in a separate post titled Dividend Coverage Roundup: Background Notes, referenced in the Author’s page. For more recent analyses, a default assumption of fat tails is generally made in favor of higher-ranking distributions for reasons detailed in the methodology.

Financial Visualizations. For selected 3D stylized and other sketches of underlying theoretical models of selected companies, see the author’s page for links; given the qualifications and shortcomings, at the very least it is hoped that such models might be appreciated for their aesthetic value.

The author may also hold positions in securities of companies, including through ETFs, that are covered herein. The discussion and any visuals may contain significant errors, are subject to revisions and are provided 'as is' solely for informational purposes, not for trading or investment advice. This preliminary analysis is exploratory; no claims are made as to the validity of data, assumptions, theoretical models and methodologies; results may be based on prior data that do not reflect the most current market events.