Ian is currently the President and Chief Investment Officer of Blackhaw Wealth Management, a boutique investment adviser serving individuals, families and foundations. Ian is also the current Director of Research for a private family investment company and foundation in Austin, Texas, and is a Chartered Financial Analyst.

I’d like to spend a few minutes reflecting on origins of Social Security – one of the two major entitlement programs – and examine how closely this program mirrors a typical Ponzi scheme.  Given that a significant part of our nation’s debt problem is tied to the major entitlement programs, Social Security and Medicare, I think it is important to frame the discussion and have some historical perspective on the matter.

First for a definition: the U.S. Securities and Exchange Commission states that “a Ponzi scheme is an investment fraud that involves the payment of purported returns to existing investors from funds contributed by new investors.”  Although none of us actually “invest” in Social Security, the SEC’s description of a Ponzi scheme is quite similar to the mechanics of how the Social Security system functions: the government collects contributions (i.e. payroll taxes) from current workers and then distributes that money to retired workers in the form of benefit checks.

But wait, you say, I have been paying into the system during my working years, so when I retire I will get my own money back (plus interest) and therefore Social Security is not a Ponzi scheme, right?  Actually, no, and here’s why: the money that current workers are paying into Social Security is not held in segregated accounts just for them – it is being paid out to current beneficiaries.  Someday when you retire, your contributions will be long gone – having already been distributed to those who retired long before you did.  When you retire, your social security benefit checks will be funded by those who continue to work and contribute payroll taxes during your retirement years.  In short, Social Security functions by making payments to existing retirees from money that is contributed by current workers, which is more or less the essence of a conventional Ponzi scheme.

To get a better idea of how this works, let’s start at the beginning of Social Security itself.  In January, 1940, the Social Security Administration issued its first-ever monthly benefit check, bearing check number #00-000-001, in the amount of $22.54.  The check was paid to a 64-year old woman in Vermont named Ida May Fuller (shown in the picture).  However, because the U.S. Social Security Administration had been created only a few years earlier, Ms. Fuller only contributed payroll taxes during the last 3 years of her working career.  By the time of her retirement in 1939, Ms. Fuller had paid a total of $24.75 into the Social Security trust fund. 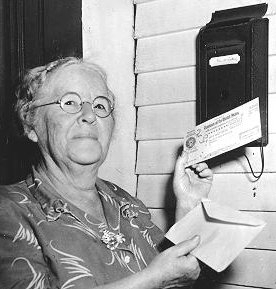 Ms. Fuller was blessed with longevity, and lived to the age of 100 years, passing away in 1975.  Astonishingly, over the last 46 years of her life, Ms. Fuller collected Social Security benefits totaling $22,888.92 – more than 900x the amount of her total contributions.  Ms. Fuller’s first benefit check alone was almost equal to the cumulative total of all payroll tax contributions that Ms. Fuller had ever made!

I do not recount this story to be disparaging to Ms. Fuller in any way, but her story should be concerning to anyone with a vested interest in the solvency of our nation and our ability to care for an aging population.  It is immediately obvious that the benefits paid to Ms. Fuller simply didn’t come from her initial contributions, plus interest.  After all, Ms. Fuller received tens of thousands of dollars in Social Security benefits over more than 4 decades, despite contributing only $25 into the plan.  Ms. Fuller’s benefit checks could only total such a large sum because they were funded by the contributions of others who we working during from the 1940’s through the 1970’s, contributing payroll taxes all along the way.  Sound familiar?  Remember, in a Ponzi scheme, the returns that are paid to the early participants in the fraud come from the money that is provided by the later participants in the fraud.

It is important to recognize that all Ponzi schemes are destined to fail – it’s simply a matter of time.  A Ponzi scheme can only remain stable as long as the money from new participants (workers) coming into the system exceeds the payments going to those that are cashing out (retirees).  A typical Ponzi scheme is destined to fail because eventually it becomes impossible to find increasing numbers of new people to participate and the money is exhausted.  Of course, Social Security is not a typical Ponzi scheme and it won’t fail in this conventional manner, but it will eventually be restructured in a major way and therefore fail to provide the level of benefits that are currently promised to the majority of the working age population.

At the inception of Social Security in the 1930’s, employees paid only 1.0% of their earnings into the plan and adults had an average life expectancy of 78 years.  Today, most working adults pay 6.2% of their earnings into the plan and have an average life expectancy of 84 years.  Furthermore, the original social security plan did not pay survivor benefits to spouses, nor to children or to the disabled, as it does today.  In other words, Social Security is now responsible for paying more and more benefits to individuals that never made contributions at all.  Also, as you probably know, Social Security benefits are indexed for inflation through cost-of-living-adjustments.  It is interesting to note that if the retirement age had been indexed for changes in life expectancy in a similar fashion, the current eligibility age for collecting benefits would be 71 years.

We are now at the inception of a wave of retiring workers who will begin drawing Social Security benefits that have been over-promised.  Going forward, these retirees will receive benefits that are funded by a comparatively smaller working population, most of whom already contribute 6.2% of their income into the system (notwithstanding the temporary payroll tax cut during 2011).  In order for the system to remain stable, the contributions must be brought back in line with the distributions and this can only happen in one of two ways: cut benefits or increase payroll taxes (or both).  This situation clearly is not the fault of the retirees or other beneficiaries; it is the fault of the government for mismanaging the actuarial assets and liabilities of the plan.  Had the necessary adjustments to the plan been made years ago the effects would have been more modest and less economically consequential.  But the time for moderate change has now passed.  If we intend to save Social Security and minimize the impact to current and soon-to-be retirees, the restructuring must involve larger and more consequential actions.  The sooner the better.

Hopefully this gives us a glimpse into why entitlement spending lies at the core of the nation’s growing debt problem.  And we haven’t even begun to talk about Medicare yet…