Bio: a CFA who has heard ''Great quarter guys!'' on many conference calls. (And, I am chagrined to say, said it on a few.)  Please do your own due diligence; just my opinion; often wrong.  For bio, scroll down on substack blog to right ===>

What is the price of a NYC taxi medallion? 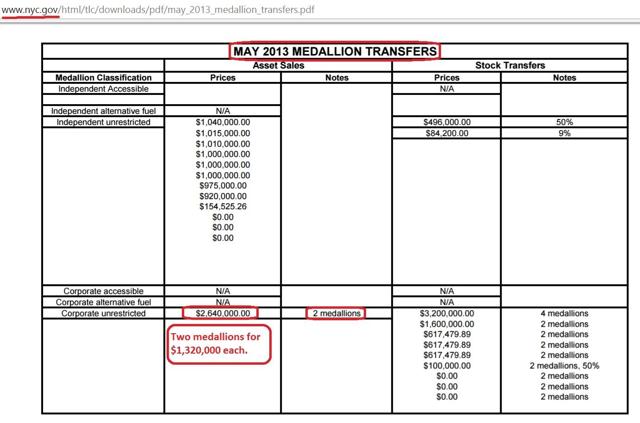 For the month of June, 2017, the NYC TLC reported three taxi medallion sales that fall under the imperfect characterization of "arms-length" sales, averaging $182K.  As of June 30, 2017, as shown in the "New York City Taxi Medallion Loan Valuation Marks as of September 30, 2017" chart at the beginning of this article, the six peer financial institutions averaged a NYC taxi medallion mark equal to $396K, 118% above the $182K price from NYC TLC (below). 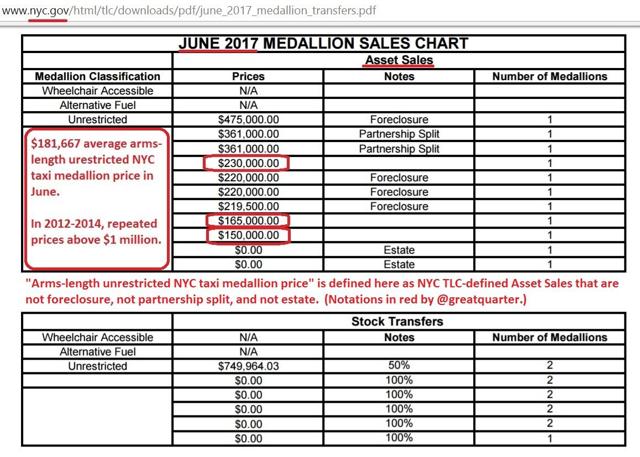 For the month of September, 2017, the NYC TLC reported two taxi medallion sales that fall under the imperfect characterization of "arms length" sales, averaging $193K, in line with earlier sales of $195K in July and $190K in August.  As of September 30, 2017, as shown in the "New York City Taxi Medallion Loan Valuation Marks as of September 30, 2017" chart at the beginning of this article, the six peer financial institutions averaged a NYC taxi medallion mark equal to $338K, 75% above the $193K price from NYC TLC (below).

With four months of reports -- June, 2017 to September, 2017 -- from the NYC TLC showing average monthly "arms-length" sales between $182K to $195K, one might expect a continuation of that tight price range.

That would be wrong!

For the month of October, 2017, the NYC TLC reported 21 taxi medallions were sold that fall under GreatQuarter's imperfect characterization of "arms length" sales, averaging $398K.  So much for the tight range of arms length sales! 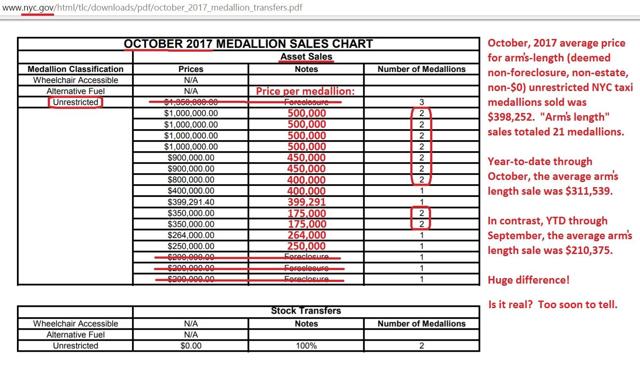 The jump experienced in October, 2017 affirms the peer financial institutions' wisdom in not reacting to every month's sales.

But there may be more to the story.  One peer, on its Q3 2017 conference call, stated: "although we provided financing to help complete the deal, we took it as a positive that we sold seven repossessed medallions last month [October, 2017], actually at a price of $450,000 per medallion to a high net worth borrower".  While not marked a "foreclosure" in NYC TLC charts, a self-financed sale of owned medallions does not the earlier characterization of an arms-length sale, thereby highlighting a flaw in GreatQuarter's admittedly imperfect characterization of "arms length".

Furthermore, while it seems an uncertain bet that NYC taxi medallion prices have bottomed, an important sale took place in September, 2017 that may have cleared inventory overhang, potentially leading to a temporary, if not longer, bounce.  The September 18, 2017, Friedman bankruptcy auction represented 37% of 2016's entire volume of NYC taxi medallion sales.  MGPE, Inc. bought all 46 medallions for $198,000 per medallion, inclusive of a 6% premium owed to the auction house.  Business Insider linked MGPE to Marblegate Asset Management, a Greenwich, CT-based hedge fund.  Does the entrance of a hedge fund alter the taxi medallion market?  Could one hedge fund lead to more?  Could MGPE be planning to buy more medallions?  Now that the auction overhang has lifted, will medallion prices bounce?  If MGPE leases those 46 medallions (previously tied up in court and not leased), will the extra supply soften lease rates and utilization?  This all bears watching, but too soon to tell.

What do loan marks mean?

The first chart in this article, "New York City Taxi Medallion Loan Valuation Marks as of September 30, 2017", includes a column titled "Q3 2017 Mark Net of Sales Costs (000's)", showing each financial institutions default valuation of its NYC taxi medallion loans.  One of the lenders in the peer group of financial institutions, MFIN, is a Business Development Company ("BDC"), a form of unregistered closed-end investment company.  As common amongst BDCs, MFIN provides detail on its loans.  A portion of the first page, of 11 pages, of MFIN's Q3 2017 Exhibit 99.1 detailing NYC taxi medallion loans is below.  A key piece of information, the number of medallions per loan is not provided in the SEC filing, but that information can be obtained through New York State UCC filings. 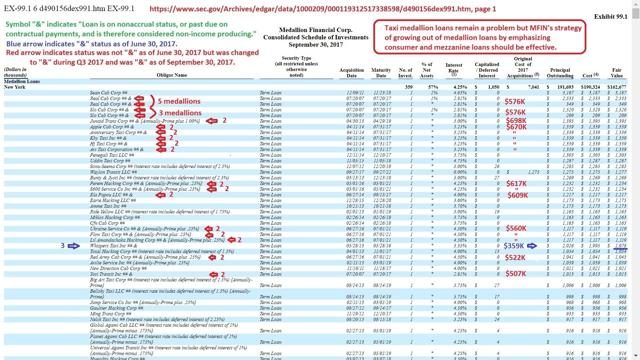 On the first page of the Q3 2017 Exhibit 99.1, seventeen loans are designated by "&", indicating "Loan is on nonaccrual status, or past due on contractual payments, and is therefore considered non-income producing."  Of those loans denoted with "&", the only loan that is marked at the stated $359K mark is the Whispers Taxi Inc. loan, a three-medallion loan shown with the blue arrow.  Three months ago, the Whispers loan was also marked at the stated mark, then $411K.  A review of New York State UCCs shows that the three medallions secured by a May 28, 2013 UCC filing regarding a Whispers Taxi Inc. loan now appear in an October 24, 2017 UCC filing regarding a MickeyBus Taxi LLC loan.

Shown with red arrows, sixteen loans on the first page of Exhibit 99.1 have been newly denoted by "&" in Q3 2017.  All sixteen loans new "&" loans are marked at higher than the stated mark of $359K, suggesting the lender deems the additional security on those loans to have value.  That is reasonable.  While we do not have the same level of visibility for all lenders in the peer group, one might surmise that others in the peer group may have also adopted this practice. 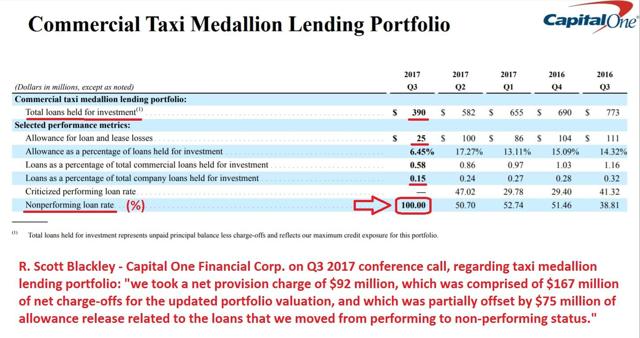 COF does not disclose its NYC taxi medallion mark, which makes it difficult to independently conclude whether COF is being aggressive or conservative with its taxi medallion loan marks. 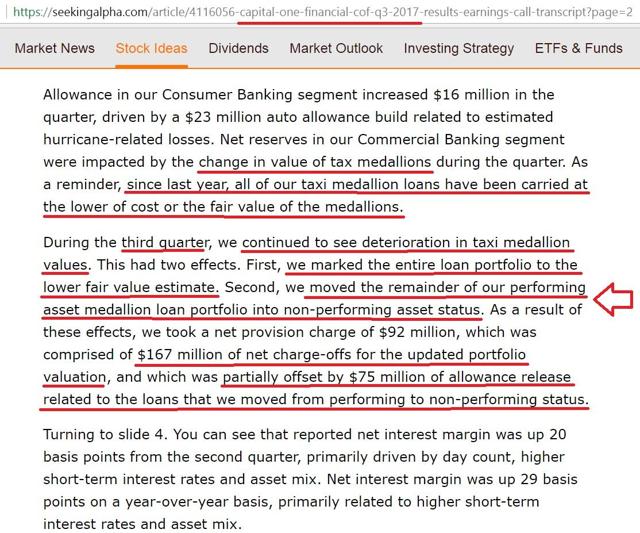 Considering the flexibility afforded to financial institutions with respect to estimated collateral values and loan values, and the small amount of taxi medallion loans in relation to all COF's loans, one wonders if COF would be more willing than its peers to charge off taxi medallion loans to put a bad experience behind it, particularly during a strong quarter.  Other lenders in the medallion space might be less eager to aggressively write down medallion loans, if the lender has a meaningful mix of medallion loans in its overall loan portfolio. 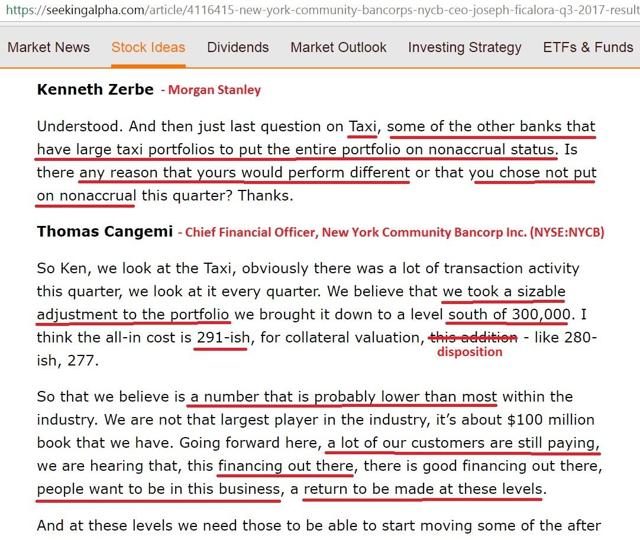 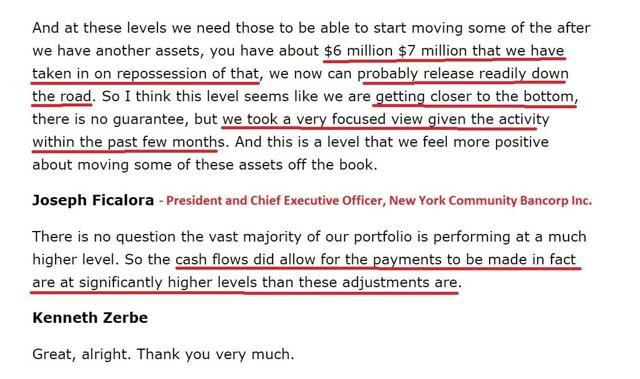 Below, CFO Cangemi says they looked at August and September medallion transactions, as well as bankruptcy transactions, as part of the process to settle at $272K value post disposition.  Transaction fees would include most prominently a 5% transfer tax, plus legal and brokerage costs. 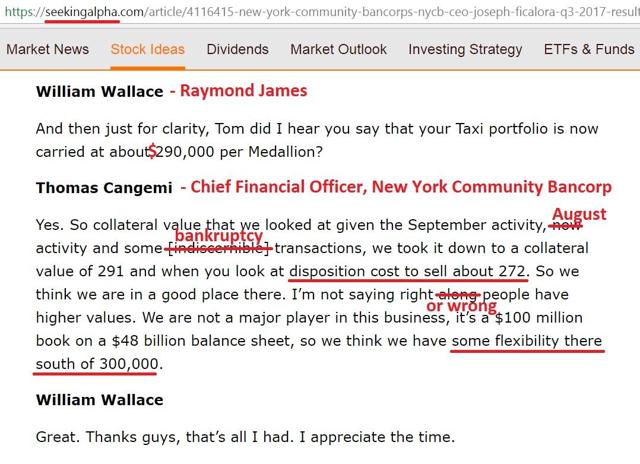 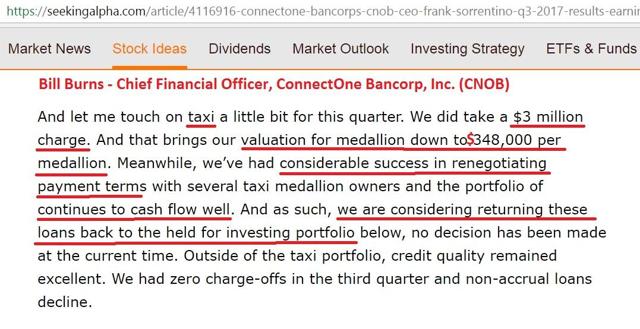 CNOB had put its taxi medallion loan book on "held for sale" status but is considering returning it to "held for investment" status since the portfolio is cash flowing and the anticipated institutional buyers are not yet ready to buy portfolios, CNOB says. 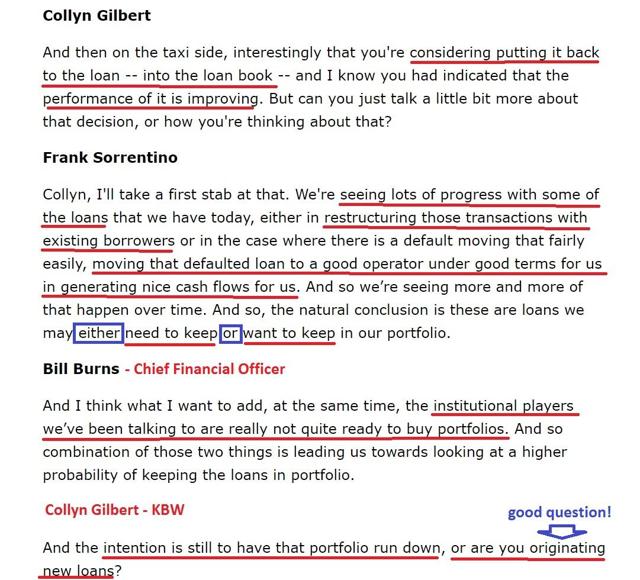 Chairman and CEO Sorrentino stated that it appears the pendulum is beginning to swing in the favor of medallion cabs. 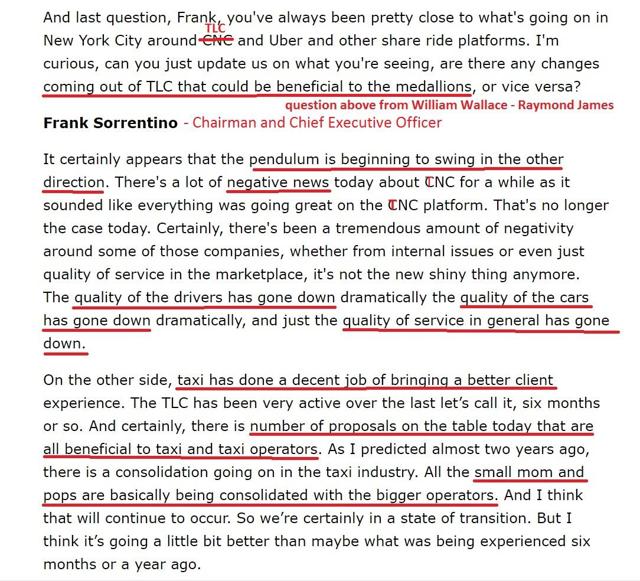 Analysts on the call did not inquire as to whether the description of a cash flow return of 5% or 6% included interest alone or both interest and repayment of principal.

President and CEO Singh said that, in addition, BKU took a further 15% haircut which essentially brought medallion valuations to "a tad under $300,000". 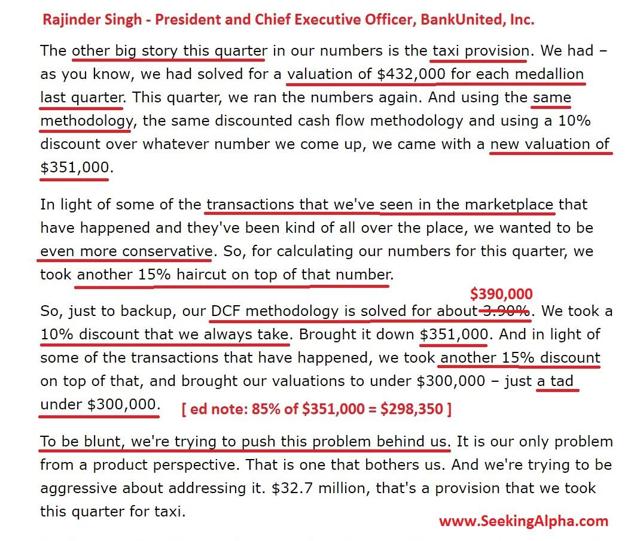 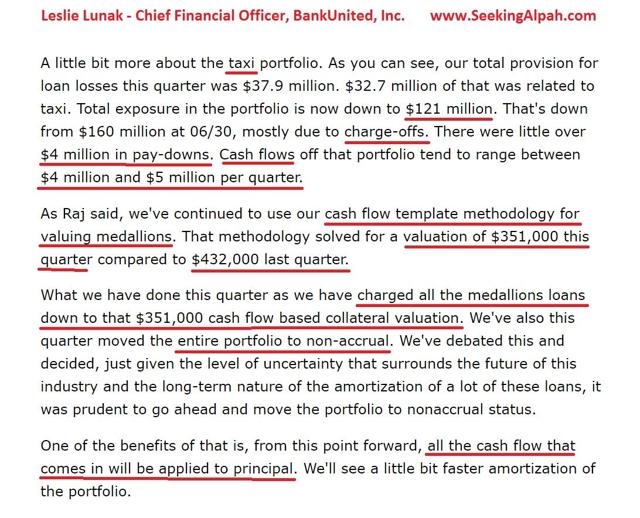 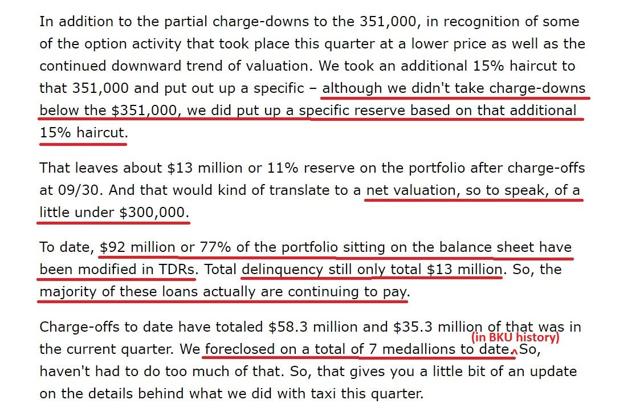 BKU CFO Lunak indicated that "since the beginning of time", BKU has taken possession of seven taxi medallions, although it is not clear if BKU still owns those medallions.

On the Q3 call, Wells Fargo's Jared Shaw asked about the outlook for SBNY's medallion exposure.  Although SBNY had written down its NYC taxi medallion marks by $168K to a value of $358K in Q2, SBNY EVP Howell guided not to expect a gain on the disposition of medallion loans and seized medallions. 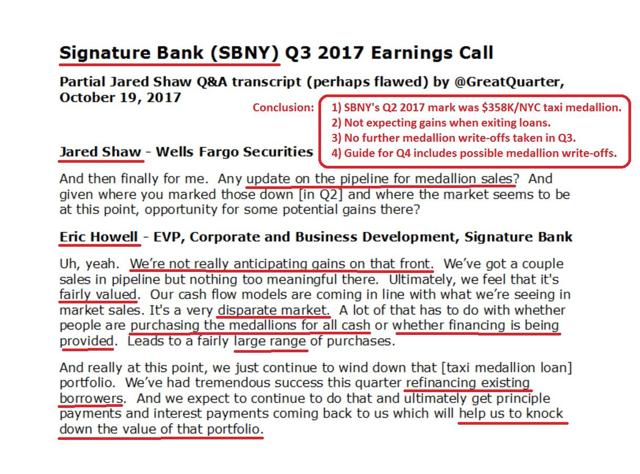 While SBNY did not take taxi medallion mark-related write-offs in Q3, EVP Howell did guide analysts to continue to be prepared for $20MM of write-offs in Q4 and maybe going into 2018 as well (guidance on anticipated 2018 medallion-related provisions was not clear to me) due to "choppiness in the medallion situation". 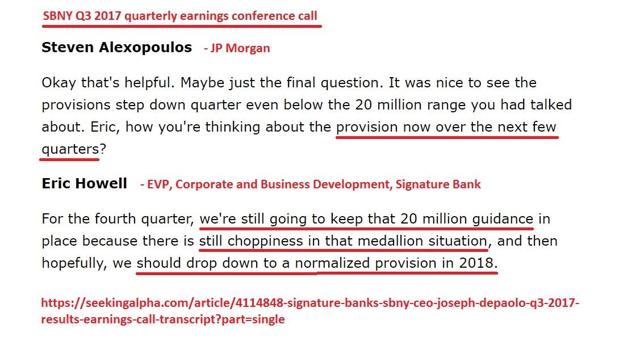 Unlike four of six peer banks that put their entire taxi medallion loan portfolio on non-accrual status, MFIN did not.  In contrast, MFIN continued to take a case-by-case approach.  On page 10 of its 10-Q, MFIN states: "Taxicab medallion and commercial loans are placed on nonaccrual status, and all uncollected accrued interest is reversed, when there is doubt as to the collectability of interest or principal, or if loans are 90 days or more past due, unless management has determined that they are both well-secured and in the process of collection."

As of September 30, 2017, 36% of MFIN and consolidated subsidiaries' gross medallion and commercial loan portfolio was on non-accrual status (page 10 of 10-Q).  At Medallion Bank, on the same date, 15% of medallion loans were on nonaccrual (page 19 of 10-Q).

Additional disclosure: I have no position in any common stock mentioned in this article. I am short MFINL bonds. In addition to Seeking Alpha's Terms of Use: Read this article at your own risk. Under no circumstances should this article be construed to be investment advice. You agree to do your own research and your own due diligence. Always consult a financial advisor. In no event should Great Quarter be liable for any losses. I make mistakes and I've been wrong. While, to the best of Great Quarter's ability and belief, great care was put into its research, analysis, opinion, and writing, and while this article and the information herein is believed to be accurate and reliable and does not omit material facts, it is presented “as is” and without representations or warranties of any kind, express or implied. Great Quarter makes no promise to update articles or any information, analysis, or opinion herein. Following the publication of this article, Great Quarter reserves the right to make any trade at any time in any securities mentioned; in the future, I may be long, short, or neutral regardless of any information, analysis, or opinion herein; furthermore I will not report when a security position is initiated or exited. Humans are bad at predicting the future. Part of this article attempts to predict the future. Great Quarter's goal to be more right about the future than wrong. But, the future holds surprises. Please be aware that at least part of this article will prove to be wrong. Great Quarter welcomes readers to make comments or ask questions in the comment section below. If you enjoyed this article, please follow Great Quarter by clicking Follow above.