Starting from 1999 working as a research analyst. Took part in the development of modulated volume technology for index and stock analysis on the intraday timeframes. Developed row of the proprietary volume and advance decline based technical indicators. Invented High/Low Breadth index chart - new way to analyze market Breadth data

Post-Presidential trading generated great deal of volume. While many traders are exited about it, there are some points to consider.

When we look at volume, we have always to bear in mind that volume is 2-side transaction - for each buyer there is a seller. On 11/9/2016 (next day after the Presidential election) the S&P 500 daily volume hit 3.8 billion shares (see index volume chart below). From one side, on that day, there were investors who bought these 3.8 billion shares. From another side, there were also investors who dumped 3.8 billion shares of the S&P 500listed stocks. The S&P 500 moved up strongly and it may look like a strongly bullish sentiment. However, we have to remember, that this movement generated a lot of Bears as well. By looking at the past week we may see

The S&P 500 recovered and this is a good news, however, it could be dangerous to get caught by the crowd's emotions. If, as on Mobday, the S&P 500 continued the recovery on low volume than it would be another story. However, strong volume surge indicates strong activity among the Bears as well. It looks like by the end of the week, the Bears were able to halt the Bullish pressure of the exited by President elections crowd. The Bulls are getting exhausted, while the Bears continue to stay active. (More about volume surges and trend reversals at http://www.marketvolume.com/advance_decline/overbought_oversold.asp)

We have to remember that, even President's promises (if they are implemented) may assist in revenue increase for many corporations, the changes are not coming tomorrow. First, the new President will reshuffle the Government. Then, it will take months to prepare changes, pass them through the House and Senate and at the end there will be some date in future from at which new regulations will become law. After all of these, it may takes several quarters for us to see increase in corporations' revenue.

We may discuss whether new changes are going to good or bad for the country, however, as of now, nothing changed - 4Q earning reports will not be affected, 2016 earning reports will not be affected and we still looking into interest rate increase. At this point of time, the closest thing that may change fundamentals on the market is coming Black Friday and Cyber Monday sales.

The first emotional wave of the impatient investors is halting. Next week, the institutional and professional investors will be evaluating the situation, risks and expectations. We get more news from the new elected President. When the "Smart Money" evaluate the situation we will see whether they support past week crowd's emotions. If not, we may see a strong reversal down - at least resent bullish volume surge suggests it.

At this point of time, as trading volume goes down, the volume theory suggest that after such huge volume surge, we should expect a reversal down. The coming week still could be flat and modestly positive in anticipation of Black Friday and Cyber Monday sales. However, if nothing positive comes to generate new wave of Bullish traders, the market may run into a situation when the Bulls became exhausted - those who wanted to buy already bought and new buyers are not coming. 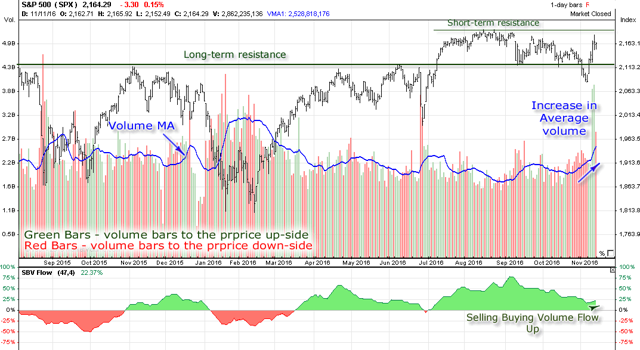 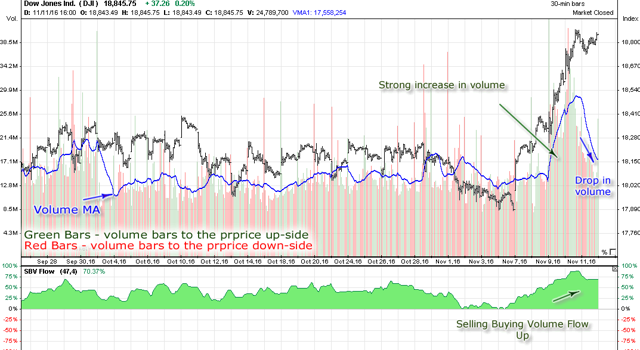