Starting from 1999 working as a research analyst. Took part in the development of modulated volume technology for index and stock analysis on the intraday timeframes. Developed row of the proprietary volume and advance decline based technical indicators. Invented High/Low Breadth index chart - new way to analyze market Breadth data

Apple (AAPL) one of the most favorable companies on the market. People like it, traders like it, market likes it. The AAPL stock has one of the highest weighting in the Nasdaq 100, DJI, S&P 500 and Russell 1000 indexes. Many portfolio managers have this stock in their arsenal. Despite the sluggish performance over the past two years, this stock is still have huge base of loyal investors who still believe in the "rising of the fallen star".

Can Apple stock recover from its bad performance and start to shine on the market or Apple's time is over and it will be just an ordinary stock? Below are some cons and pros to consider with respect to the Apple future:

Below you may see the Apple stock 4-year chart. 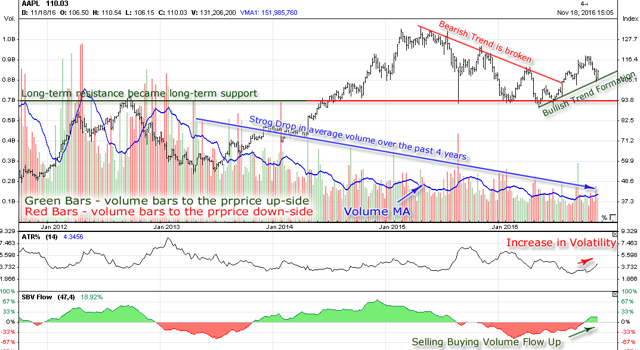 Again, the same as with general points, we have positive and negative signals in the AAPL technical analysis.