We believe that a winning portfolio includes a combination of both passive and active investments. That investors need both broad market exposure, as well as strategies that have the potential to outperform the status quo. Founded in 2001, 361 Capital is a leader in alternative investing. We offer a suite of actively managed alternative strategies that seek to deliver meaningful alpha, manage risk and offer diversification potential to investor portfolios.

In January, we discussed how analyst sentiment was at a six-year high as of the end of 2017. Here, we take a look at the small cap universe and see if that feeling has endured, or if analysts have reined in their expectations.

January saw the highest percentage of positive revisions for any single month since the beginning of 2008. Over 70% of all estimate changes for the next two fiscal years were positive in the first month of 2018. February’s ratio declined to a more normal 56.3%, yet was still the most positive February in our data. March’s positive percentage fell just below 50%, to 49.7%, yet remained above March’s average. Analyst sentiment picked up in April, as the positive percentage improved to 55.6%, also above average. 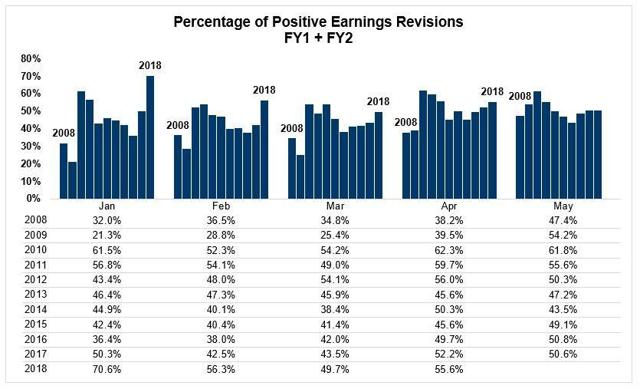 Given the magnitude of January’s ratio, it was inevitable to see lower percentages in the subsequent months. February, March, and April were each above the ten-year average for those months. So, despite the decline from January, revisions are still more positive than negative, indicating analyst sentiment is still favorable. The directional changes of the first four months of 2018 have actually been consistent with past averages. Typically, February is lower than January, March is lower than February, and then April increases from March.

The high positive revision rates observed during the first few months is partly a function of recently enacted tax and accounting changes. But, a stronger dollar, rising rates, and higher domestic exposure each provide a nice economic tailwind relative to larger capitalized companies. In short, analyst sentiment in our small cap universe is trending above average. Of course, our sentiment for small cap equities remains high as well (but we could be biased).

The views expressed are those of the author at the time created. These views are subject to change at any time based on market and other conditions, and 361 Capital disclaims any responsibility to update such views. No forecasts can be guaranteed. These views may not be relied upon as investment advice or as an indication of trading intent on behalf of any 361 Capital portfolio.

This 361 Capital blog is not intended to provide investment advice. This blog should not be construed as an offer to sell, a solicitation of an offer to buy, or a recommendation for any security by 361 Capital or any third-party. You are solely responsible for determining whether any investment, investment strategy, security or related transaction is appropriate for you based on your personal investment objectives, financial circumstances and risk tolerance. You should consult your legal or tax professional regarding your specific situation.