Investor from the Great White North

New developments are hitting from all sides and have been conveniently timed at the stock cycle peak when the entire semiconductor industry was clearly showing signs it was already rolling over. Whether you look at the disappointing numbers from South Korea and China or take into account President Trump directly addressing China’s 2015 blatant theft of intellectual property from Micron Technology, all of this adds up to increased tensions across the board creating concern that any trade deal is much further off than anticipated. Add to the mix the possibility of the U.S. bombing Iran and the retaliation of China invading Hong Kong, what you have is the perfect storm of a pullback with fears of slowing growth. 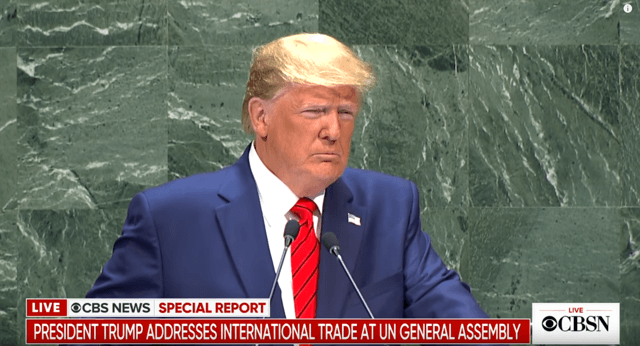 So where are we now?

If you recall from my recent article of September 15th “Micron Technology: The Possibility of a 10% Pullback is Real”, we were seeing the early signs of a pullback due to the MACD lines crossing but the severity was unclear. At that point in time something smelled off with the stock action and volume, but since it was the early innings of a MACD interception I erred on the side of caution by making the following statement at the end of the article “Currently we’re in wait and see mode so please don't sell until the situation is clear.”

You can read more about the MACD indicator here:

Micron Technology: The Possibility Of A 10% Pullback Is Real - linklinklink

Well, now the fog has lifted and now instead of seeing the beautiful gleaming waves of wide-open seas ahead I came to face the realization that an iceberg is off the port bow. What will unfold over the next 4 weeks will be the downside of the Market Cycle of Emotions. At first there will be denial, then fear, followed by panic and finally despondency.

What most semiconductor investors haven’t realized right now is that the 10% I predicted in the previous article is now looking more like May 2019, with the very real possibility of a 20% pullback all the way back down to the 200-day moving average of $40-41. This would be a perfectly timed pullback where the bottom would form when the JEDI contract is announced mid October.

The Theory of the 50-Day Moving Average

If you happened to read my first article back in August of 2019 “Micron Technology: The New Big MACD Of Inflection Points”, I covered the reasons why Micron was about to rally from its sideways movement at $40. In order to validate my theory I first stepped back into history to look at the collapse of May 2019. You can go back and read the full article if you’d like but I can summarize it quickly here for you.

To spot when the stock is about to take a large dive, we need to look what is going on with the 20-day and 50-day moving averages. As long as the 50-day remains in a consistent upward trajectory, any pullback below the 20-day will gain support at the 50. However, if the 50-day has rounded at goes flat that indicates it will no longer provide support. There is typically a temporary pause in stock movement at that support point but eventually it will crash right through leaving the next support line of the 200-day.

Why the 50-Day is Worrying for Micron and Other Companies

Now that we understand the importance of the direction and orientation of the 50-day, we need to look at other companies and indicators to see what the entire market is telling us. In the following charts what I want you do is look at how closely the similarities are of May 2019 to today. Even though the 50-day is above the 200-day indicating long-term bullish sentiment that will not save us from these major pullbacks. 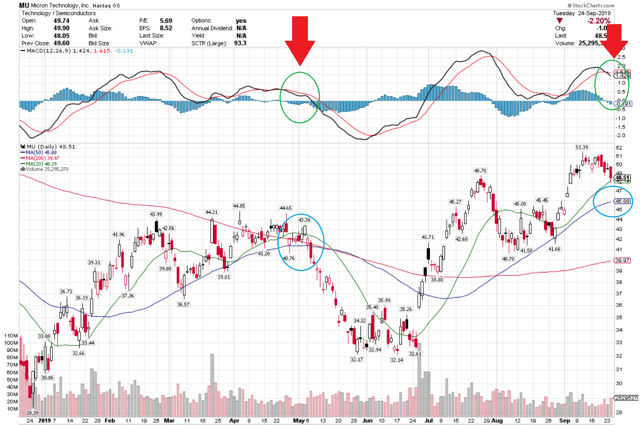 Instead of explaining these one by one I’ll mark up the charts and let you evaluate the similarities and accuracy of the prediction that the 50-day will no longer provide support during this downturn. 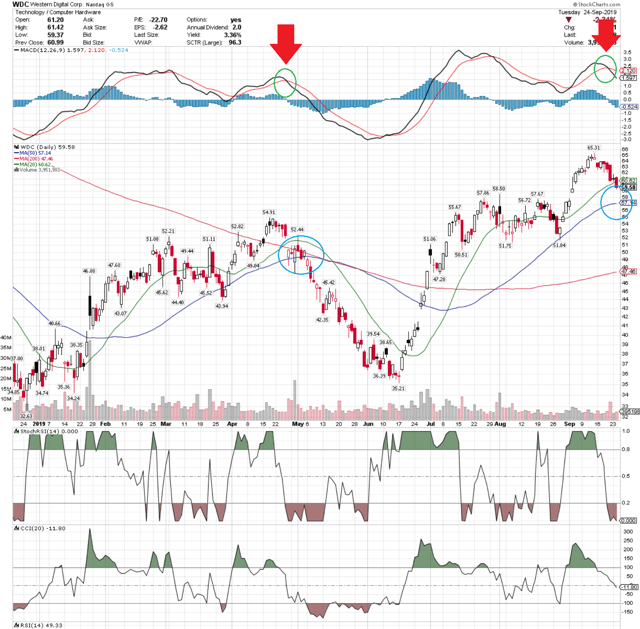 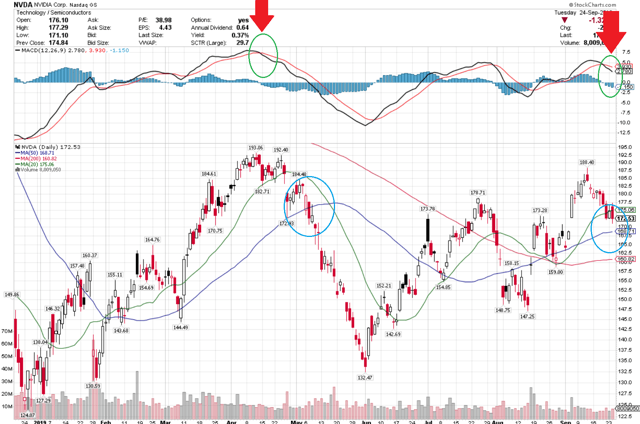 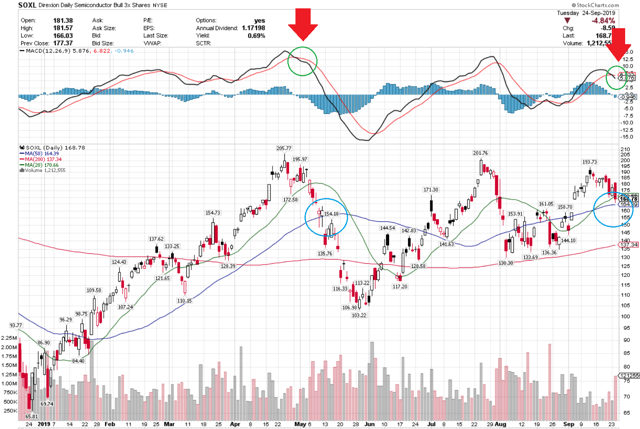 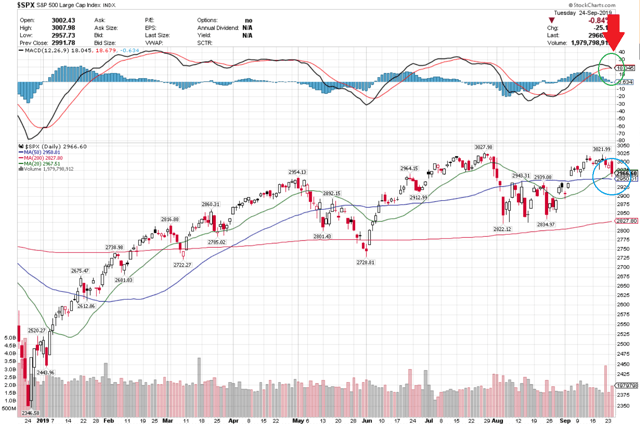 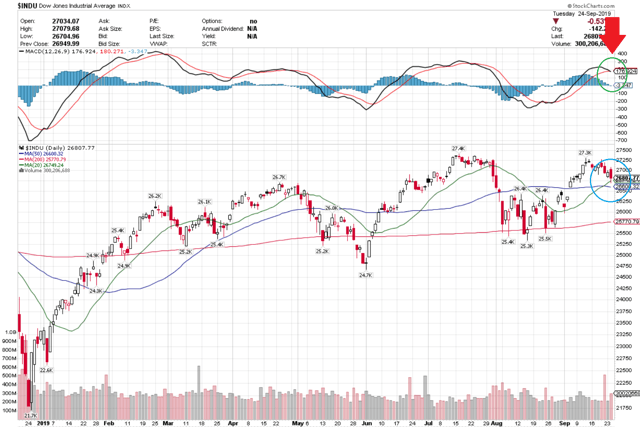 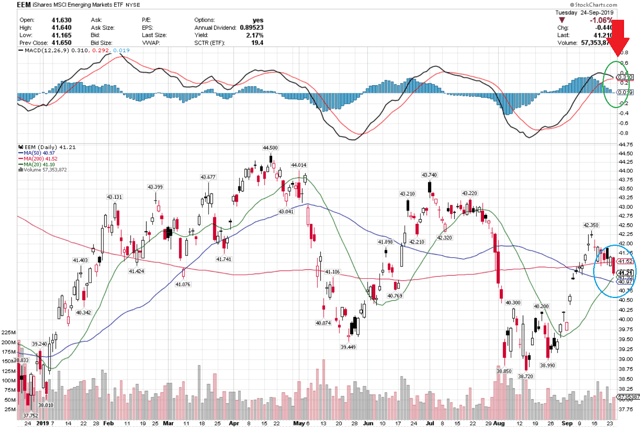 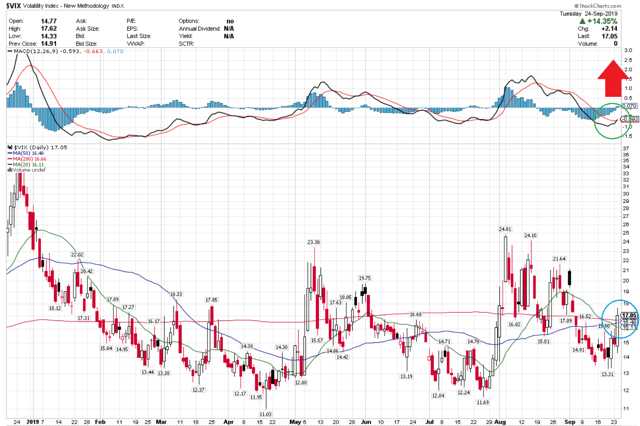 While I have optimism for Micron Technologies upcoming earnings report on September 26th, the current market situation makes me believe it won’t make much of a difference. If the entire semiconductor industry is heading downward a relatively positive earnings report will be merely a speed bump before continuing to follow the trend.

As always, these are my thoughts on the situation but please do your own research and make your own decisions. If you are long then these temporary pullbacks are irrelevant to your ultimate goal and shouldn’t be acted upon, unless you intend to accumulate additional shares.

Market timing is very difficult and my estimates may be overly bearish. We'll find out in October.

Disclosure: I/we have no positions in any stocks mentioned, but may initiate a long position in MU over the next 72 hours.