Seven Corners Capital Management, LLC is an investment research and advisory firm based in New York City. The firm aims to achieve investment returns by identifying (1) companies with wide competitive moats and honest and able management, trading at reasonable valuations, (2) turnaround and "asset play" opportunities (as described by Peter Lynch in his book "One Up on Wall Street") and (3) special situations (such as mergers, spinoffs and liquidations) that provide attractive returns which are non-correlated to the broader equity markets. Our hope and expectation is to achieve annual returns approximately 10% above that of the S&P 500 on a long-term basis.

We continue our blog series: Market Musings, Volume 1, Edition 12, giving our (hopefully not too random) thoughts on recent goings-on in the markets. Today, we present Buffett's Way to Wealth.

We came across an intriguing graphic recently, showing the progression of Warren Buffett's net worth was by age: 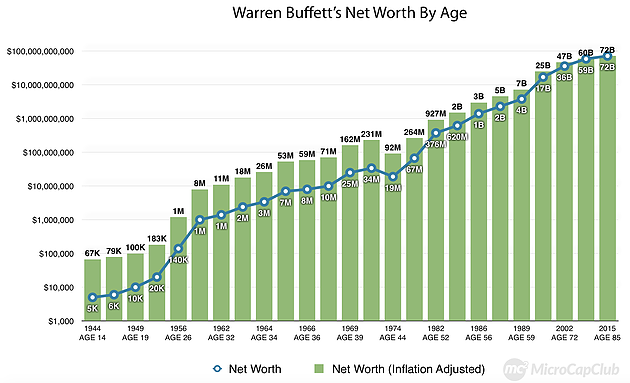 Interestingly, Buffett has been able to consistently increase his personal net worth at a high compounding rate throughout his life (without excessive variation in his CAGR, in contrast to somebody like Zuckerberg or Gates who saw gigantic leaps in relatively short time periods). From age 19 through age 32 [1949-1962], Buffett's net worth increased from $10,000 to $1,000,000, or 100-fold, representing a CAGR of 43%. Within this period, we see that his net worth skyrocketed from $140K to $1MM in the six years between ages 26 to 32, as these were the first 6 years he ran his private investment partnerships (during which he earned a 25% override above a 6% hurdle rate on his limited partners investment gains). After reaching $1MM net worth at 32, we find that he increased this by 25-fold by age 39 [1969], representing a CAGR of 58% for this seven-year period (again, much of this was due to his carried interest in his partnerships). After shutting his partnerships down at the end of the 1960s and devoting his full energy to Berkshire Hathaway (BRK-A), Buffett's net worth increased from $25MM to $376MM between the ages of 39 and 52 [1969-1982], with his CAGR slowing down to 23% during this period (still amazing, but far less than the prior 20 years). Again, Buffett was benefiting here from the use of OPM (other people's money), this time in the form of Berkshire Hathaway's growing insurance float. From age 52 to 72 [1982-2002], Buffett's net worth climbed nearly another 100-fold (from $376MM to $35B), representing a CAGR of 25%--so his net worth actually accelerated vis-a-vis the preceding 13-year period. This acceleration is due mainly to the massive 1982-1999 bull market in the U.S. Finally, from ages 72 to 85 [2002-2015] we see Buffett's net worth "creep up" from $35B to $72B, representing a shockingly pedestrian (at least, for Buffett) CAGR of 5.7%. Here we should note, in Buffett's favor, that during this period he began giving away many billions of dollars to charity, which likely reduced his net worth growth rate by at least several percentage points per year. All told, between ages 19 and 85 (a 66-year measurement period), Buffett's personal net worth increased by a factor of 7,200,000, representing an overall CAGR of 27%. Below we show a summary of the above results:

In assessing the staggering numbers above, we reach several conclusions: (1) Buffett's personal investment skill has been consistently outstanding throughout his life (he never made a huge financial mistake which forced him to "go back to start"), and (2) Buffett has further benefitted through nearly constant access to OPM, which has significantly helped juice his personal wealth in conjunction with (1). Put (1) and (2) together over a long enough time frame and you have a financial lollapalooza, with Buffett consistently ranking among the top-3 richest people in the world over the past decade.  Absent (2), however, and we believe that nobody would ever have heard of Warren Buffett, at least in connection with investing. Assuming that Buffett was only able to compound his wealth at 18% per annum based solely on (1), simple math tells us that his net worth at age 85 would "only" have reached $555 million--certainly fantastic, but nothing close to an amount that would cause Buffett to become internationally famous as the "Oracle of Omaha". Going from 18% to 27%, however, has made literally all of the difference. Just this 9% incremental change in CAGR would account for ~99.2% of Buffett's 2015 net worth of $72B (i.e., $72B at a 27% CAGR versus $555MM at an 18% CAGR). Thus it's clear that if one wants to become obscenely super rich (instead of just extremely wealthy), one must gain access to OPM.