Seven Corners Capital Management, LLC is an investment research and advisory firm based in New York City. The firm aims to achieve investment returns by identifying (1) companies with wide competitive moats and honest and able management, trading at reasonable valuations, (2) turnaround and "asset play" opportunities (as described by Peter Lynch in his book "One Up on Wall Street") and (3) special situations (such as mergers, spinoffs and liquidations) that provide attractive returns which are non-correlated to the broader equity markets. Our hope and expectation is to achieve annual returns approximately 10% above that of the S&P 500 on a long-term basis.

Sadly, Rite Aid's (RAD) stock has continued to test multi-year lows, dipping as low as $0.98/share on October 23rd. We previously provided our views on how shareholders can vote to change RAD's failing status quo at the October 30th annual meeting (see our article from last Friday entitled "Rite Aid - Vote 'Em Out On October 30th"). With just a few days remaining before the meeting, RAD shareholders must realize that their leverage to effect change at the company will soon evaporate for another year (i.e., until the 2019 annual meeting). Thus, it is imperative that RAD shareholders act now and demand desperately overdue reform at next Tuesday's meeting, namely, by voting against all incumbent directors (Proposal No. 1), voting against approval of RAD's executive compensation system (Proposal No. 3) and voting in favor of the stockholder proposal to separate the board chairman and CEO positions (Proposal No. 4).

The Case For Governance Reform (Continued)

Believe it or not, since penning our last (admittedly lengthy) article we have come up with even more reasons to vote against the status quo at Rite Aid. We list these as briefly as possible, as follows:

1. Broken Compensation System: We went through all of RAD's proxy statements from 2000 to the present in order to reconstruct a comprehensive picture of incumbent CEO Standley's compensation since first entering the RAD C-suite in December 1999, in light of the fact that RAD states on page 26 of the annual meeting proxy statement that "the Company's compensation programs for its Named Executive Officers have been effective at...appropriately aligning pay and performance" and on page 38 of the proxy that "[w]e believe strongly that pay should align with performance and this focus is reflected in our executive compensation programs". Below is a table with Standley's yearly executive position and realized pay and benefits, along with a comparison showing how RAD's shareholders have fared (in terms of RAD's stock price and dividends paid; all amounts below in $):

(Please note that for FY 2019 year-to-date numbers for base salary and perquisites, we have pro-rated against FY 2018 levels, assuming no increase; in addition, we have included the $3 million "retention payment" that Standley received in August 2018 (as per page 51 of the proxy) in the "cash bonus" column. The listed stock prices correspond to the beginning of each respective fiscal year, except for (1) FY 2000, where we used the stock price immediately prior to Standley's appointment as CFO, (2) FY 2009, where we have used the stock price as of June 30, 2008, the date we estimate Standley became an advisor to then RAD CEO Sammons (see disclosure in this Form 8-K), and (3) FY 2019, where we have used the stock price as of October 25, 2018. Finally, although $0.35/share in dividends were paid out in FY 2000, no dividends were paid after Standley joined the C-suite in Q4 of that fiscal year, per page 16 of the FY 2000 Form 10-K, so the amount listed in our table for this year is zero.)

From the above, we see that since FY 2000, Standley in his various capacities at RAD has received a grand total of $43.3 million in total cash compensation (base salary plus annual cash bonuses), plus an additional $4.8 million in perquisites and other compensation. Moreover, in 2003 and 2014 Standley exercised stock options and sold a total of 1.33 million RAD shares, netting him an additional $6.8 million in cash proceeds (see here and here). Thus, Standley has realized a grand total of $54.9 million in immediately available cash compensation and benefits over the past 19 years (during which he was only out of RAD's C-suite for approximately three years), while RAD's stockholders have suffered a total shareholder return of -87% (with zero dividends paid) during that period. Is this evidence of the "alignment of pay and performance" the proxy claims the company demands, or are these just empty words? Moreover, the foregoing analysis completely excludes the significant value attributable to the unexercised stock grants Standley has accumulated over the years. On this point, page 71 of the proxy states that Standley currently has economic exposure to over 16.2 million RAD shares (including 11.9 million shares which may be acquired within 60 days by exercising stock options).

From the above, we see that as a group the eight nominated independent directors have economic exposure to 1.43 million shares, or about 1/8th of 1% of the aggregate outstanding share count of 1.06 billion shares. Moreover, these same directors currently own outright a measly 321,052 shares, or 1/33rd of 1% of the total RAD shares. And as a group they have bought exactly ZERO SHARES on the open market(!). Alignment of interests? Hardly.

3. The three newly nominated directors are over-boarded - Pages 13-14 of the proxy statement disclose that RAD's three newly nominated independent directors, Knowling, Miramontes and Nayar, are already over-boarded, with Knowling currently serving on three company boards (Convergys Corporation, K12 Inc and Roper Technologies Inc), Miramontes on two (Lithia Motors, Inc and Oportun, Inc) and Nayar on two (Bemis Company, Inc. and TFI International Inc). Notably, none of these eight companies have anything to do with RAD's lines of business. Are these individuals really coming on the RAD board out of a deep passion for the drug store and pharmacy industry or are they simply looking for additional generous paychecks for part-time work? Frankly, we think the odds are minimal that any of these three will be willing to rock the RAD boat and demand further corporate governance reforms, which would likely result in them being stigmatized as "troublemakers" on not just the RAD board, but also on their other company boards (thereby jeopardizing their lucrative director fees).

4. Bruce Bodaken is the wrong choice for RAD board chairman - Director Bodaken is, in our opinion, an extremely poor choice for board chairman at RAD. Not only has Bodaken been complicit in perpetuating RAD's dysfunctional senior executive compensation system (as stated above, he has been a member of the compensation committee since 2014), but Bodaken has also been on the audit committee at Wage Works (WAGE) since 2006 (and was head of that committee from May 2009 to November 2014) (see page 7 of WAGE's 2017 proxy statement). And, you guessed it, WAGE has been engulfed in an accounting scandal since April of this year (see news coverage here and here). Finally, Bodaken has been on RAD's board for over 5 years and until the belated changes made in late September had apparently done little to rectify the company's poor corporate governance practices. Is this really the right person to lead RAD's board into the future?

5. Is anybody minding the store at RAD? - Finally, we note several troubling incidents regarding Rite Aid recently that call into question whether anybody on the board or in the C-suite is properly minding the store. First, just last month there was the $5.7 million kick-back scheme indictment of RAD's former VP of advertising, which allegedly continued undetected for 22 years(!) from 1995 to 2017:

Next we note that on June 27, 2018, Rite Aid re-affirmed its FY 2019 guidance of adjusted net income per share of between $0.02 and $0.06 (see here), only to reverse itself just 40 days later, on August 6th, and lower guidance to a range of $(0.04) and $(0.00) (see here). It is also interesting in this respect that, according to Black Enterprise magazine, RAD's current COO Kermit Crawford (basically the number two executive at RAD, under CEO Standley) was asked to leave his former employer, Walgreens Boots Alliance (WBA), in August 2014 after that company drastically and unexpectedly reduced its guidance for FY 2016 (source here): 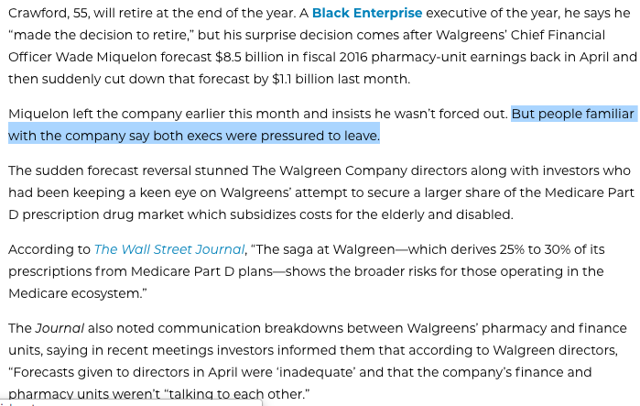 In addition, investors should recall the following rather embarrassing admission of error from pages 120-121 of the RAD-Albertsons merger proxy filing:

In connection with the preparation of this proxy statement/prospectus, it was determined that Rite Aid management’s operating cash flow calculations had not included an addback of LIFO charges of approximately $30 million annually, [as a consequence of which its advisor Citi concluded] that the implied [RAD] equity value per share...would have been approximately $1.92-$3.08 per share...in the case of the discounted cash flow analysis (vs. approximately $1.83-$2.96 per share [as previously calculated]).... The Rite Aid board of directors concluded that the revision to Rite Aid management’s forecasts to reflect the annual LIFO charge addback would not have changed its determination that the merger agreement was in the best interests of the Rite Aid stockholders at the time of such determination.

In light of the foregoing comedy (tragedy?) of errors, one has to wonder whether RAD's current leadership has any firm grasp on understanding or predicting the company's business.

Next week's annual meeting represents RAD's shareholders' last opportunity for another year to demand sorely needed corporate governance change at the company. If you have already voted in favor of the company's director slate, please note that it is not too late to change your vote. In particular, we recommend that large shareholders (e.g., those holding one million or more shares) immediately contact Rite Aid's board and management and do the following:

We believe that any fund manager holding a meaningful amount of RAD stock has a moral obligation (regardless of whether an actual fiduciary duty exists) to protect his or her investors by demanding all of the foregoing and, if RAD's management and board proves intransigent and resistant to change, by withholding their votes from the incumbent directors. But the clock is ticking. Any leverage to effect change at RAD will disappear in a just few days. The time to act is now.

Disclosure: I am/we are long RAD.