**SA editorial note: This author account has been blocked due to violations of our terms of use.

Today, I am pleased to reveal the identity behind my pseudonym, Rota Fortunae (RF), and provide an update on my research into Farmland Partners (NYSE: FPI) and FPI’s lawsuit against me.

My name is Quinton Mathews. I am the managing member and sole employee of QKM, LLC, a registered investment advisor specializing in in-depth, investigative research. From time-to-time, I independently publish my research under the pseudonym Rota Fortunae. My track record, which is available on Seeking Alpha, speaks for itself. My work on companies like Hudson Technologies, PCM, NQ Mobile and FPI has saved investors from hundreds of millions of dollars in losses.

As my work—and the work of many others—proves, short sellers serve as a vital counterbalance to Wall Street’s incentive-driven bullishness. Unfortunately, there is a growing chorus of public companies willing to wield their power to quash free speech in an effort to stamp out critical opinions. The lengths to which many of these companies will go seems to have no end, and to make matters worse, their executives can freely spend shareholder capital to pursue critics while rarely being held accountable by regulators.

Nearly two years ago, I published my research on FPI. Six days later the company issued a public rebuttal that failed to address any of the questions raised in my report or deny any of my findings. Shortly after, the company sued my pseudonym.

Since then, FPI has sold assets to "boost liquidity", cut its dividend by 60%—which it still does not cover—and recently reported a material weakness in its internal controls over financial reporting. And despite a massive buyback program in the middle of a raging bull market, FPI’s stock price has never recovered. In fact, since FPI went public in 2014, the stock price has declined from $13 per share to a low of $4.50, months after my research was published.

Yet, I do not ever recal hearing FPI’s CEO, Paul Pittman, accept responsibility for the performance of the company that he founded and leads. Instead, Pittman has blamed investors for not understanding the industry, trade wars, short sellers and a host of other excuses. It is time for Pittman, and others like him, to accept responsibility for their actions, and it is time that executives were held accountable. I intend to expend significant energy into achieving these objectives.

Update on My Research Into FPI

On July 11, 2018, I published my research on FPI, and I continue to stand by my research opinions. But my work has never stopped. Over the last two years, I have exhaustively researched FPI, and I continue to uncover matters that raise serious questions. I brought a number of these matters to the attention of the board in a letter dated November 16, 2018. My letter and and the boards response are linked and enclosed at the end of this release.

The response from board member John Good, who used to be a partner at the law firm that represents FPI in its case against me, stated:

I reviewed your November 16, 2018 letter regarding Farmland Partners Inc. and have made inquiries, including of management, into the allegations contained therein. I have been advised that none of those allegations raise any issues under the securities laws or require any restatement of FPI’s prior public filings, as to related party disclosures or otherwise.

Mr. Good's response was dated November 30, 2018, so his inquiry into matters that span numerous transactions over many years took no more than two weeks, which included the Thanksgiving holiday. And per my understanding of his response, the only group that Mr. Good identified that he spoke with was the same management team he was inquiring about. Accordingly, I have questions about any investigations or inquiries the board has performed over the last two years.

I also have questions regarding loans made to another now bankrupt tenant and the disclosures surrounding FPI’s dispositions, which Pittman has said are evidence that FPI is worth significantly more than its share price reflects. Now that I am removing the mask, I intend to bring these questions to the fore.

Update on FPI’s Lawsuit Against RF

Not having the facts on its side, FPI has recycled the tired moniker of “short and distort” and accused me of orchestrating an “insidious scheme” aimed at hardworking farmers. Nothing could be further from the truth. My research has protected American farmers from a Wall Street lawyer turned investment banker who convinced them to swap the family farm for shares of a declining company. And I wonder if any of these farmers knew that, while at Merrill Lynch, Pittman was accused of fraud in an M&A transaction.[1] As described by the Plaintiff in the case:

This case is no mere business dispute… this case is about the professional misconduct, intentional wrongdoing, and fraud of [Merrill Lynch] and Paul A. Pittman.[2]

Now Pittman is again being accused of fraud in a rash of shareholder lawsuits, and I think the potential liability to FPI is very real. I have personally reviewed tens of thousands of discovery documents. Unfortunately for investors, I cannot share this information because FPI demanded that all its discovery be hidden behind a protective order. Perhaps the best indication that FPI is keen on keeping the public from knowing the facts is that two non-parties to the lawsuit—that FPI claims are not related parties—were represented by the same high-priced, New York counsel that represents FPI. This is particularly notable for a tenant farmer who recently went thru bankruptcy and to date has refused to provide any discovery.

Regarding the discovery FPI has from me, I provided every single document I have with no dispute. And despite Pittman’s recent rant about having a “roadmap” to fraud, all he has is documents and communications showing my extensive research effort into FPI.

Pittman should also know that FPI will never get back the money it has spent on its case, yet he continues to tell shareholders that the litigation is justified. Not only are FPIs allegations against me completely baseless, but, as disclosed in the case, I made approximately $201,000 trading FPI stock. Even if FPI were to get every penny I have, it would be insufficient to cover the costs of suing me.

As far as the board is concerned, I have a message. Pittman—as the chairman of the board—has publicly lobbed defamatory statements about me being a fraudster and saying that he is going to try to put me in jail. Pittman’s statements have caused me and my business injury, and he recently took it one step further when he called me the head of a criminal enterprise. Accordingly, if FPI serves the so called “Doe Defendants” it will be explicitly labeling each of them as part of a criminal enterprise. I am reviewing all of the legal avenues available to me.

As Marc Cohodes has said, “this shit has to stop”, and I plan on doing my part. But what our market needs is more than just people willing to speak truth to power. Their needs to be protections for those willing to take the risk to speak it and real consequences for executives who abuse the privileged role they are given by the owners of the companies they lead. Until then, the fight is just that, a fight, but I am determined to make a difference and let my story stand as an example of how truth ultimately prevails.

My letter to the board and the response are linked and shown below. 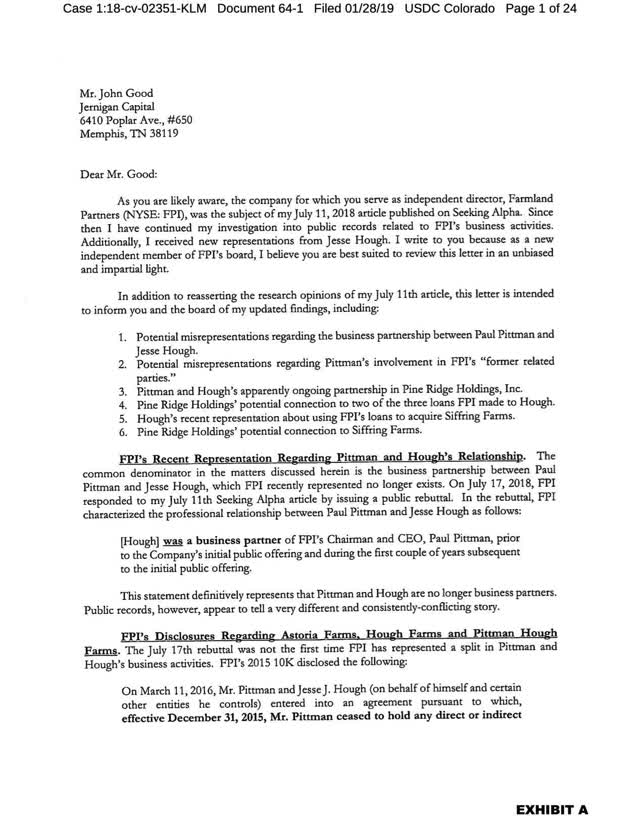 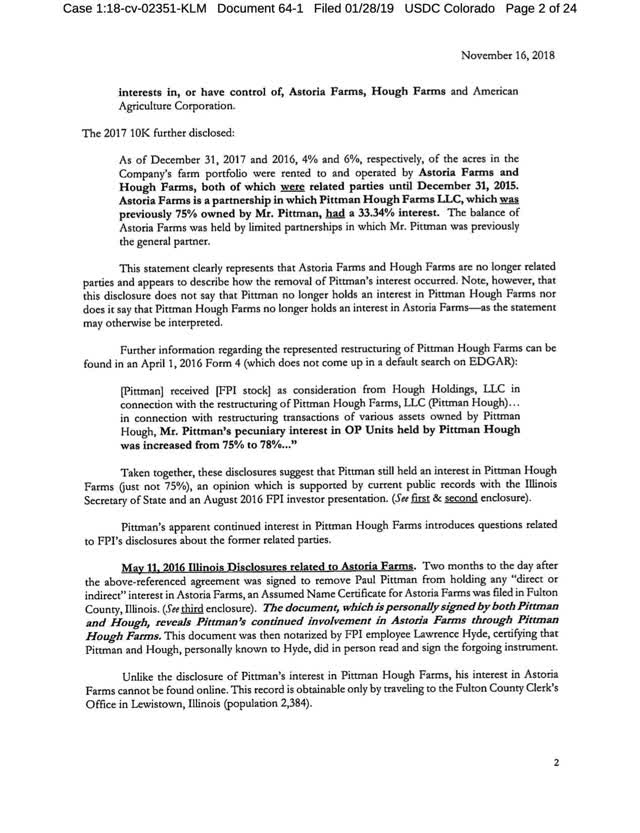 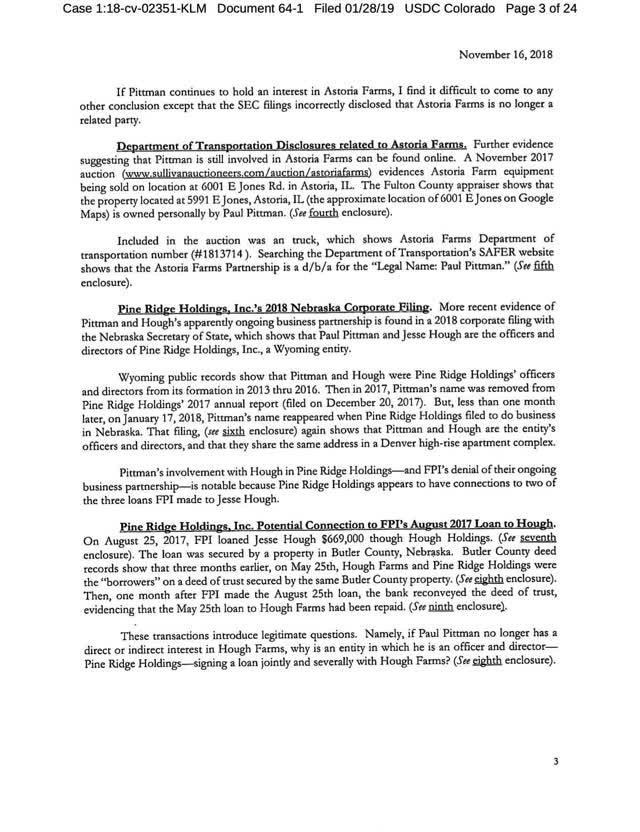 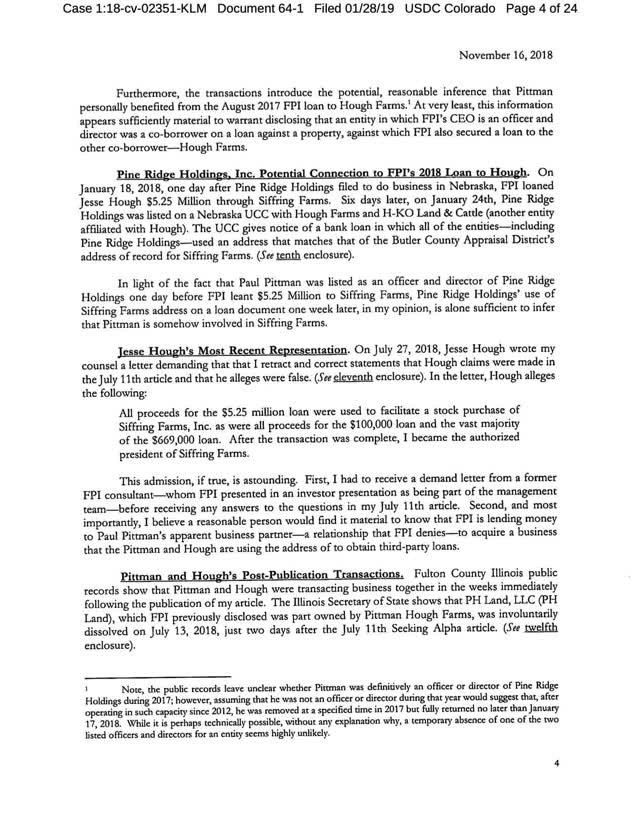 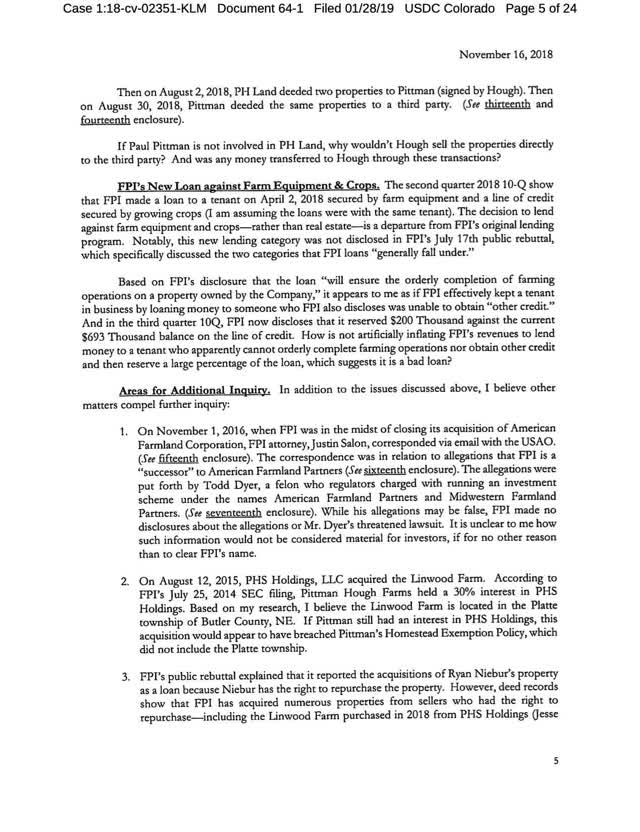 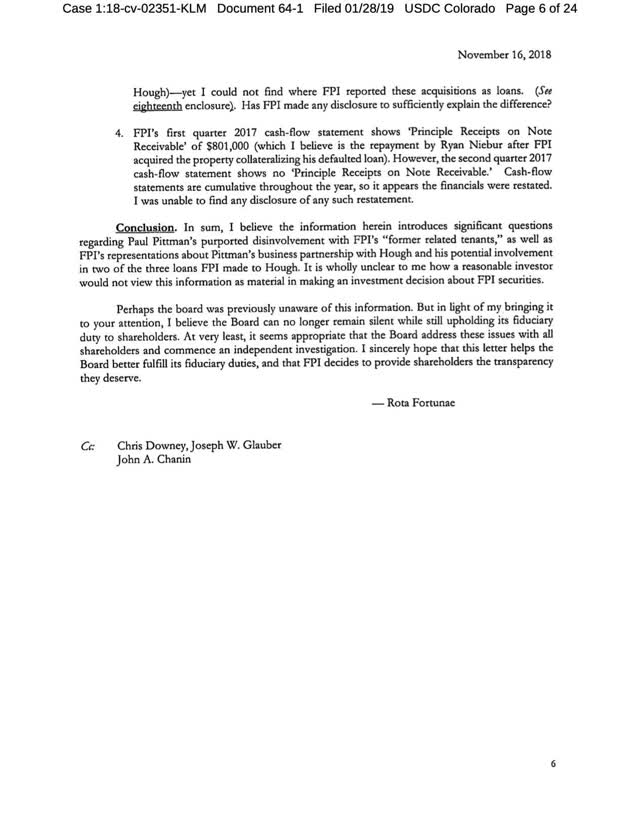 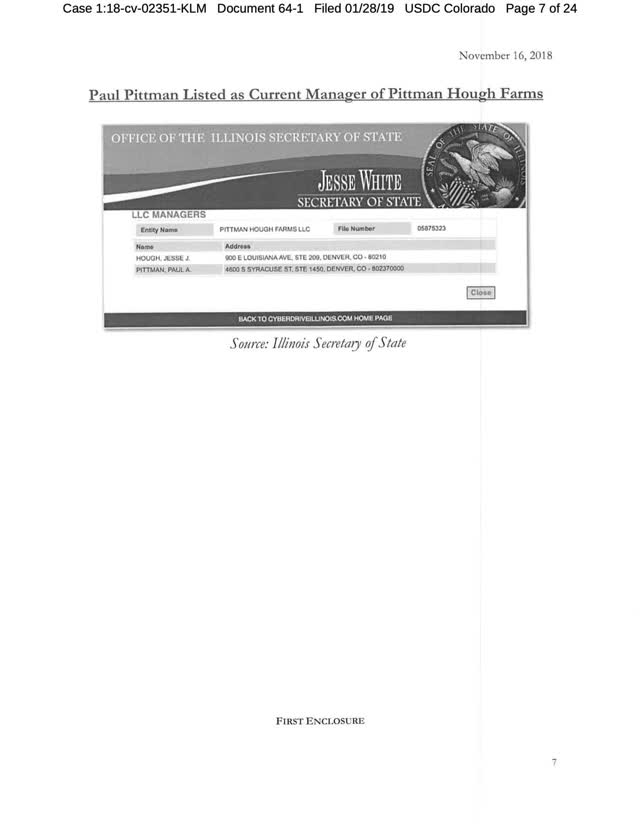 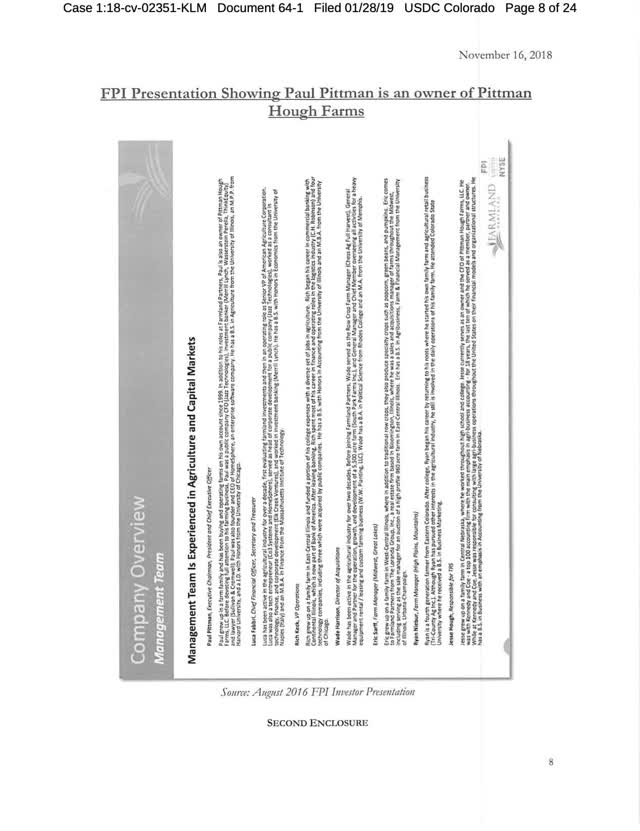 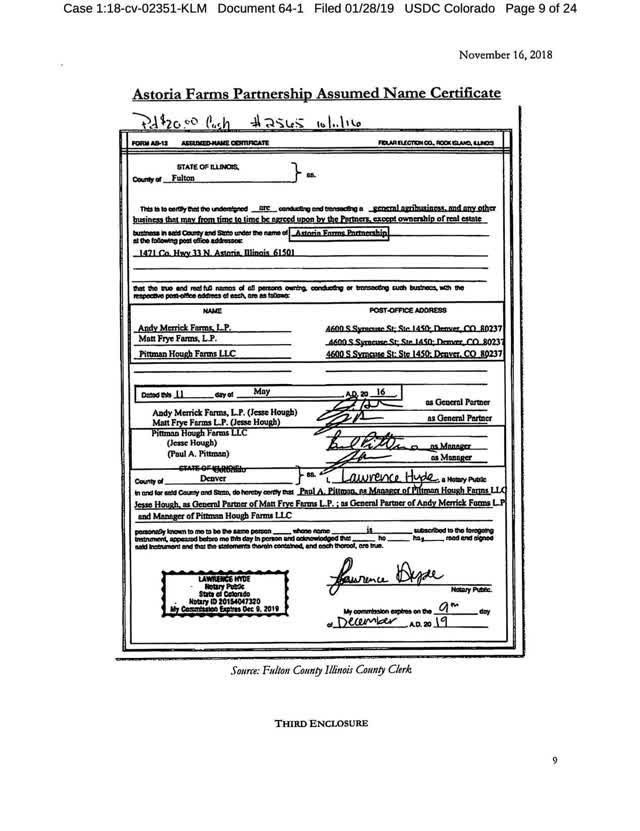 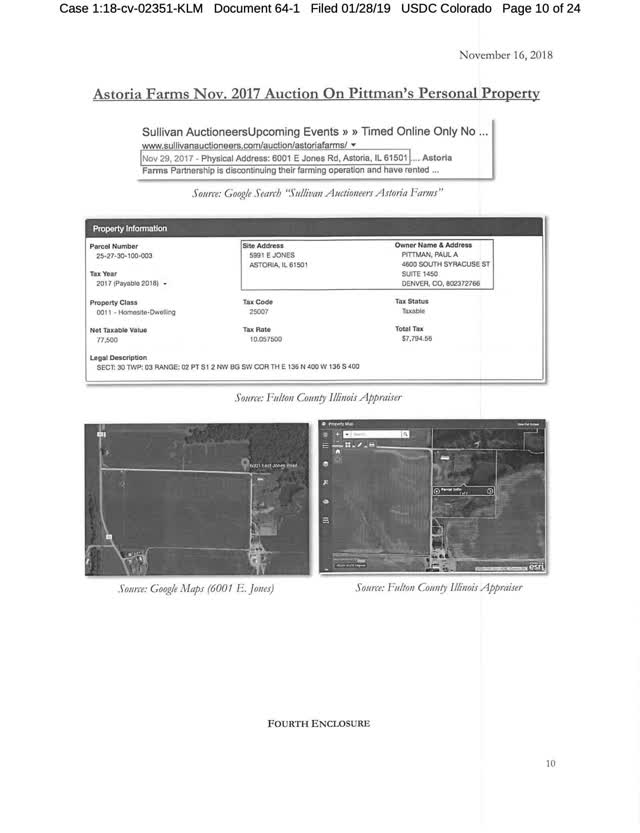 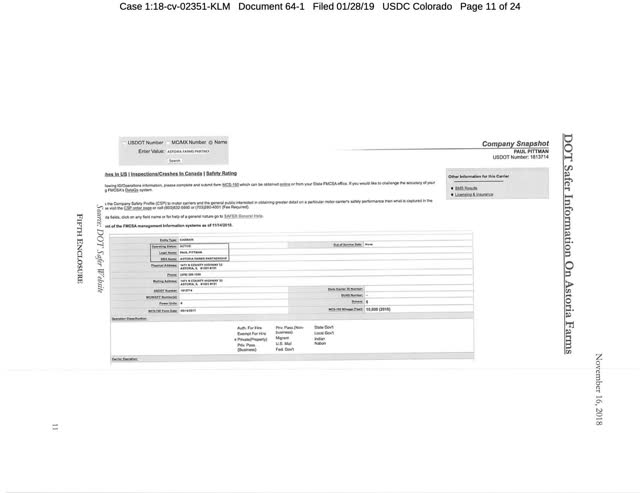 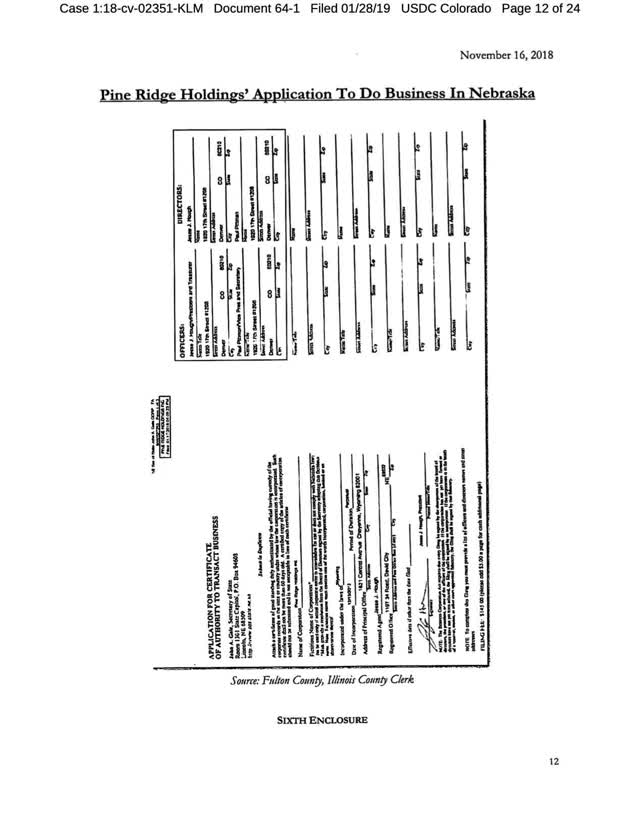 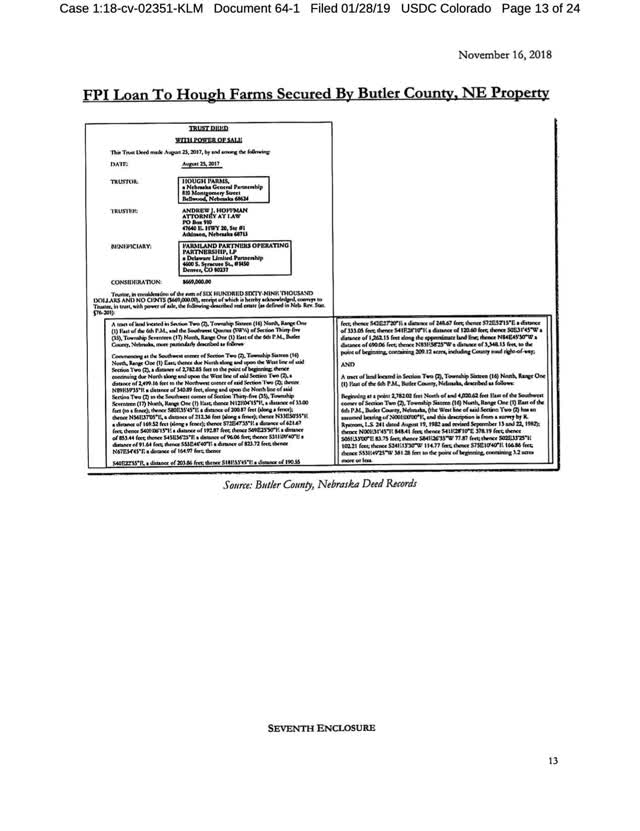 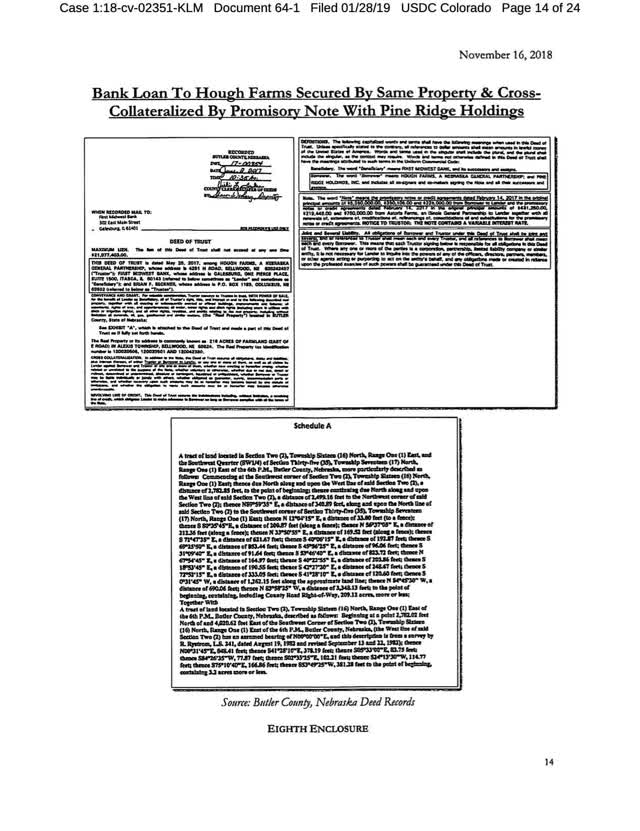 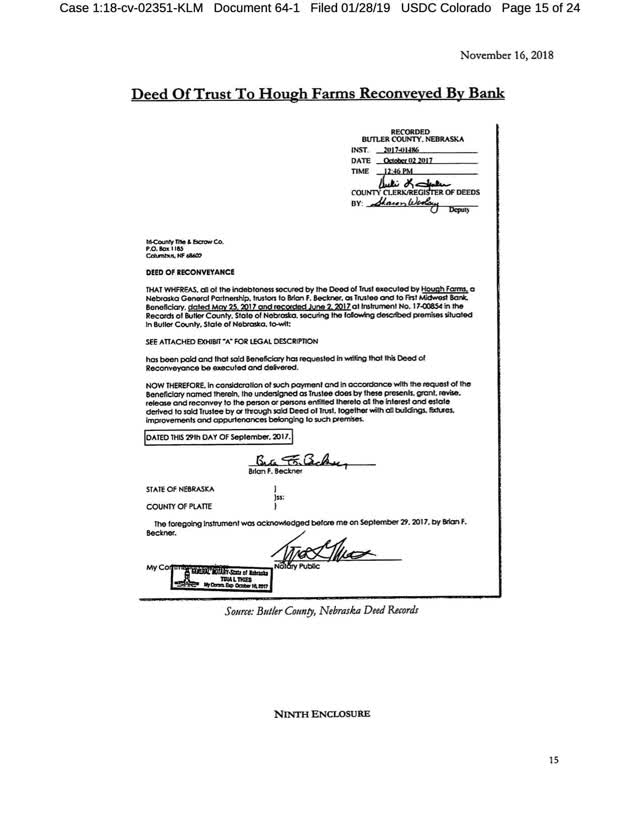 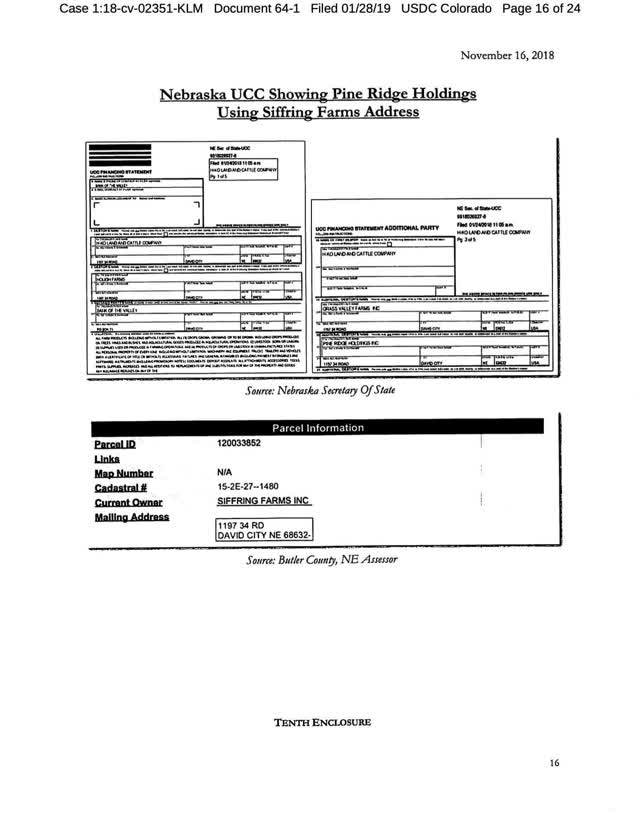 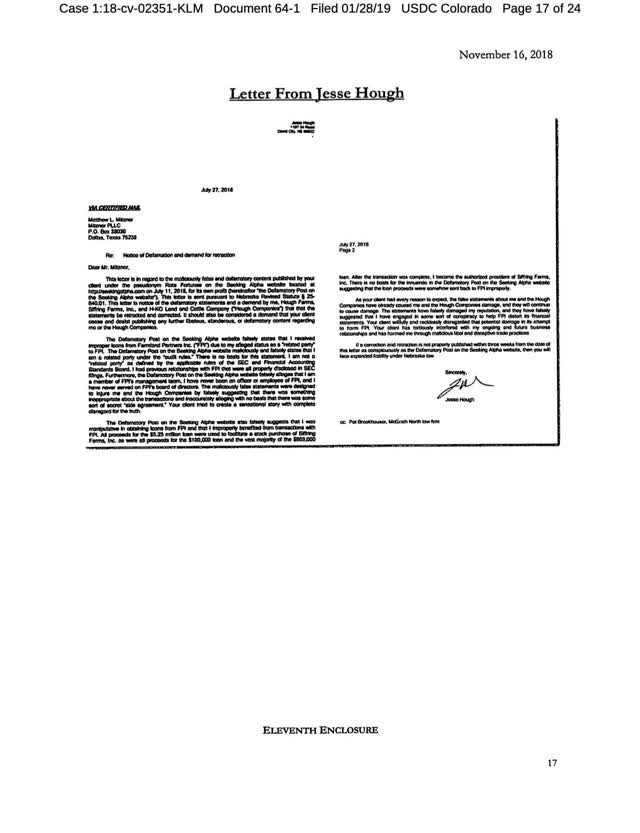 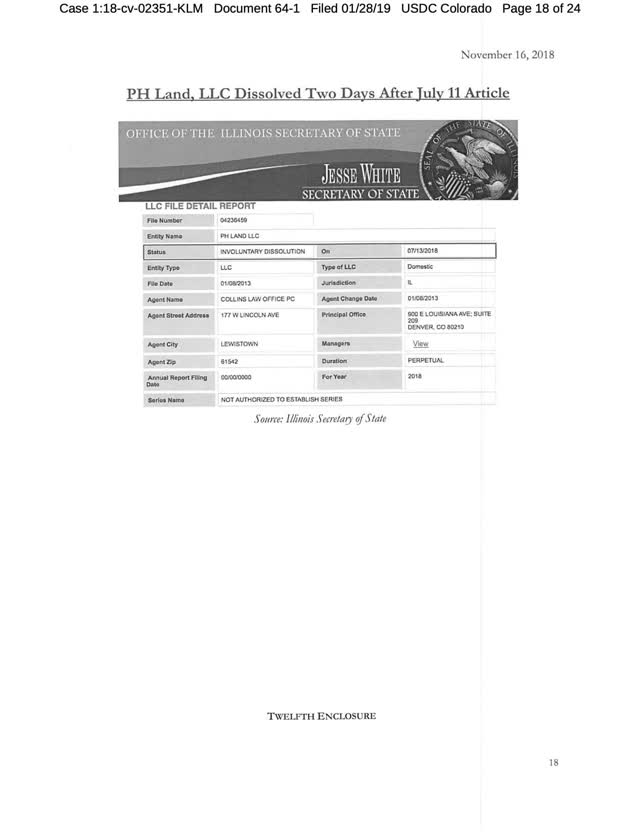 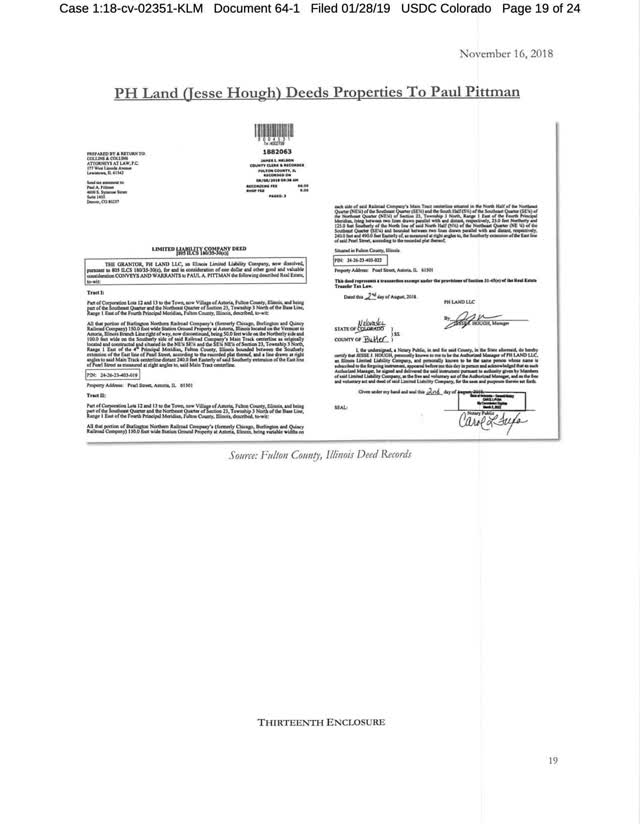 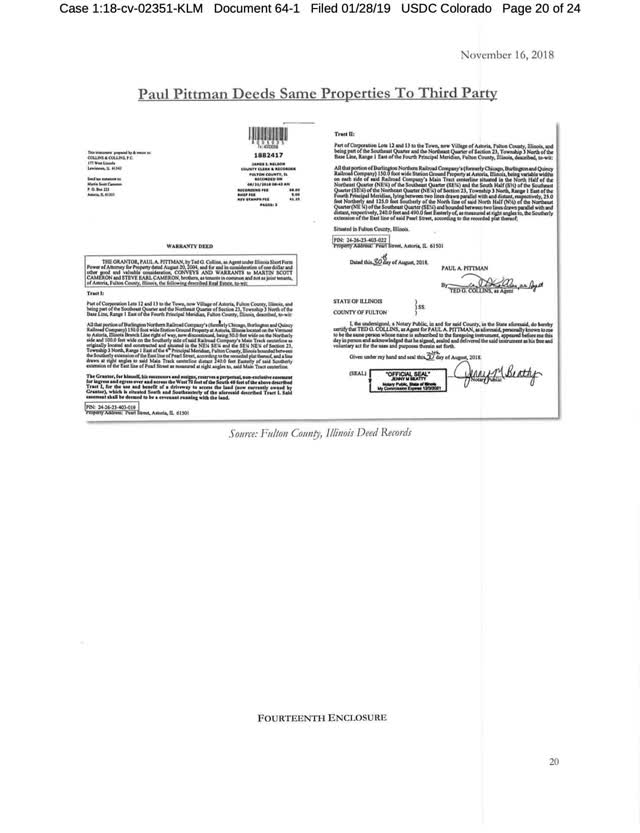 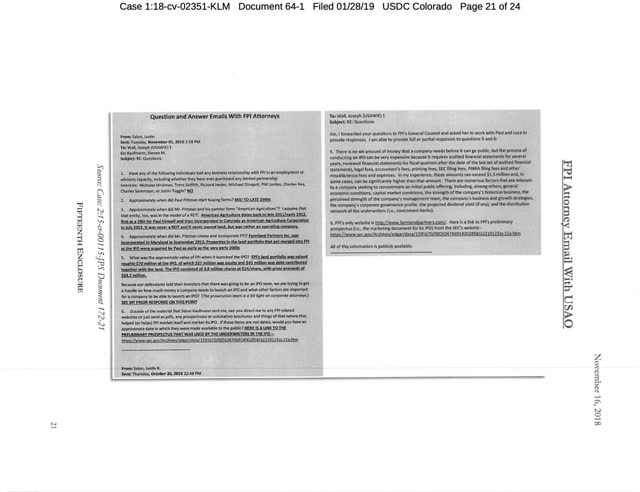 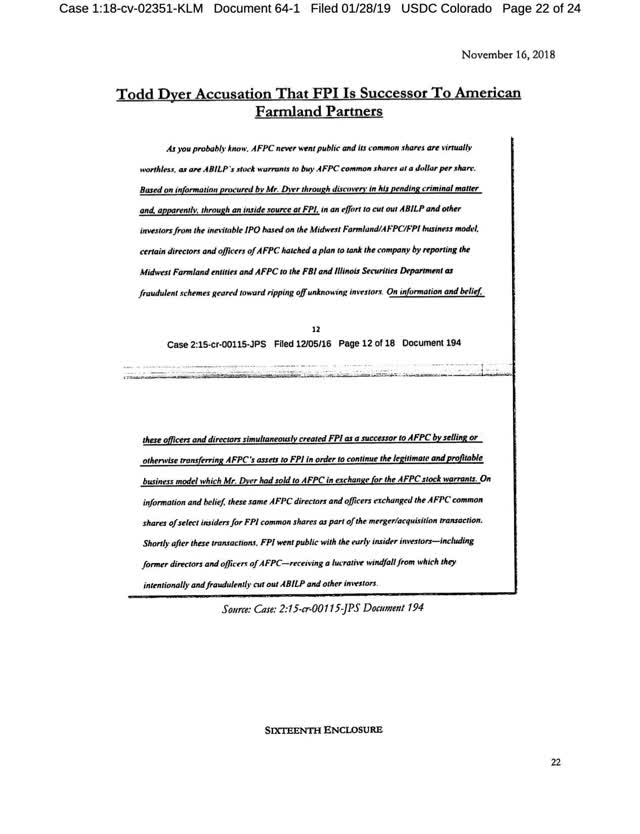 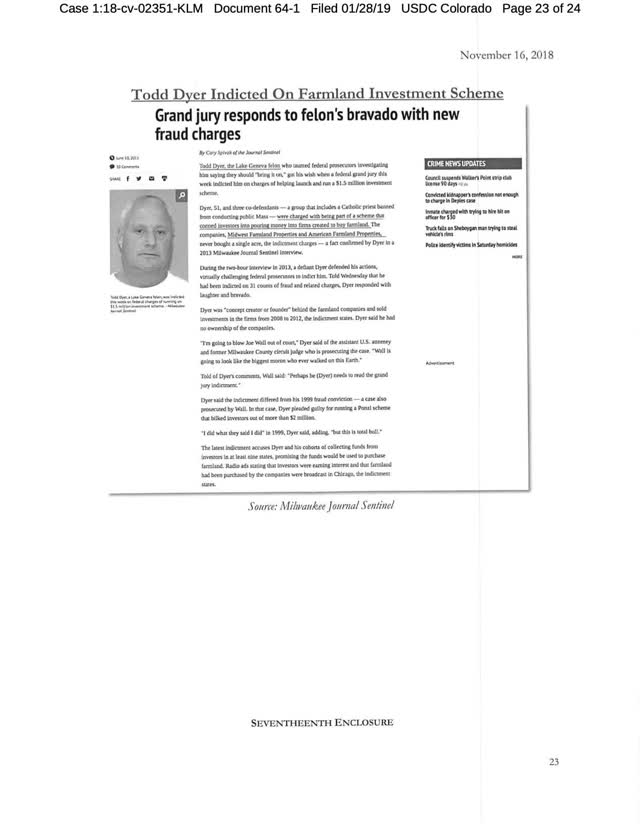 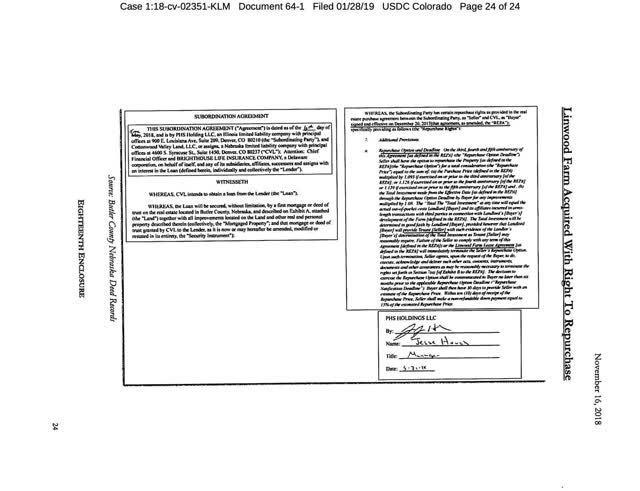 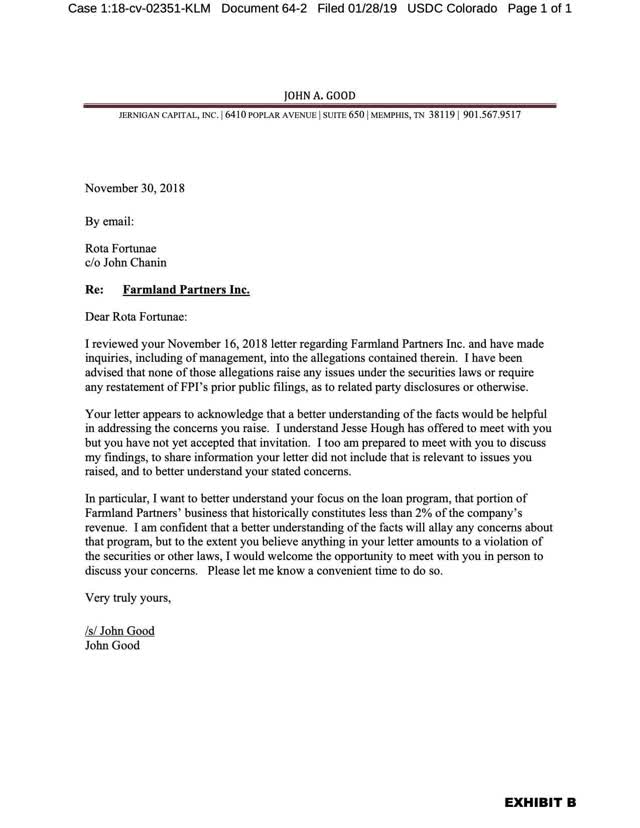 Disclosure: I am/we are short FPI.