Maria Sogard has served as CEO of e-forecasting.com since 2003. In that time, she has brought e-forecasting.com a growing list of clients and a devote following to the corporate newsletter which highlights the company’s unique economic data, such as US monthly GDP and a US leading indicator. Her previous business experience includes work in product development and sales at Technology Publishing Company, a portal-products and magazine publishing firm, and she was a consultant at Management Science Associates, a management consulting firm, in 2001.

As CEO, Mrs. Sogard has worked to further develop the reach of e-forecasting’s economic data and reporting capabilities. She also works closely with clients to ensure that they are receiving the important forecasts, economic data and support needed to be successful. She promotes the work of e-forecasting.com and provides economic analysis through a widely-followed twitter account and via other social media outlets.

Mrs. Sogard holds a Master’s Degree in Management from Carnegie Mellon University where she focused her research on management and network analysis. Her research explored social and business networks and their tie in to culture in organizations. Her undergraduate study was completed at the Tepper School of Business at Carnegie Mellon.

According to e-forecasting's Preliminary Estimate of U.S. Monthly GDP, the nation's output of goods and services rose in October.

Following an increase of 1.0 percent in September, the real-time monthly GDP, expressed at seasonally adjusted annual rates in chained 2009 prices, increased 0.8 percent in October to $16,727.8 billion.

On a year-over-year basis, real monthly GDP rose by 1.4 percent in October 2016 from the same month of last year. This follows an increase of 1.4 percent in September. 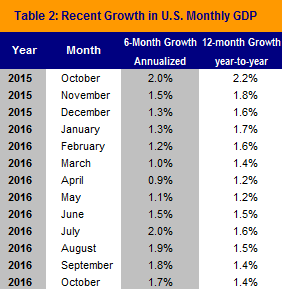