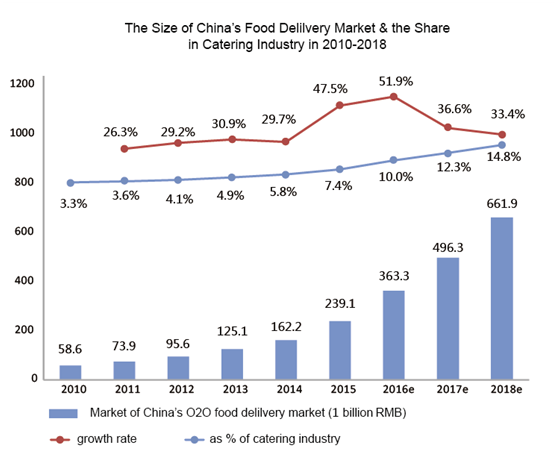 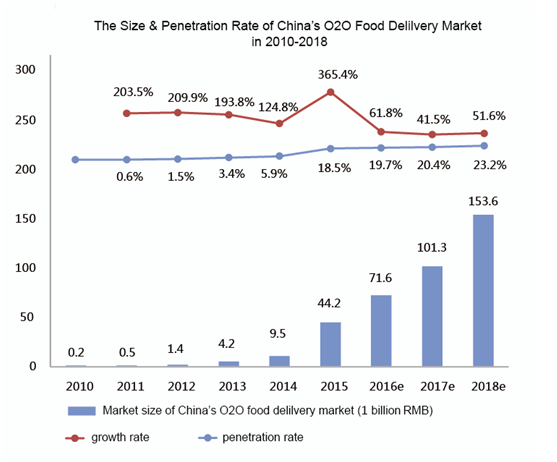 Currently, O2O food delivery market is developing from "price war and coupon competition" to the stage of "speed and service quality improvement". After the two-year price war, most of the small-to-medium-sized players had been eliminated. Now there are only three major platforms left, which are Ele.me, Meituan Takeout and Baidu Takeout Delivery, backed by the Big Three Internet companies in China, i.e. Alibaba, Tencent and Baidu.

China's O2O food delivery market started to come into sight of capital market since 2012. Ele.me, Meituan Takeout and Baidu Takeout Delivery gradually made figures in the market, thanks to the popularity of smart phone, and users were gradually accepting the emerging O2O food delivery services. After the early accumulation of brand reputation, the above-mentioned O2O food delivery brands stood out from the competition with the others. Different from the early period of "savage expansion", now users of food delivery platform are not only focusing on the discount strength, but more caring about service quality and food safety. 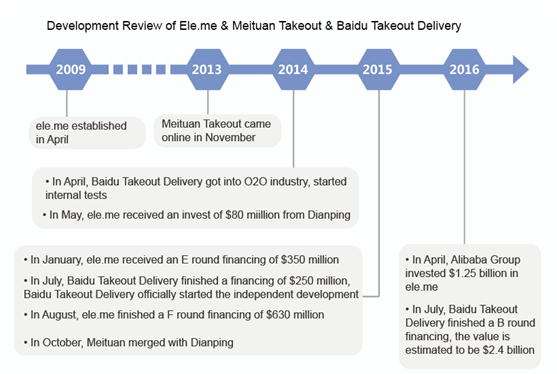 Among the three major platforms, Aladdin Data chose Baidu Takeout Delivery, which has the best user quality, to track and analyze some of its key operational metrics.

Baidu Takeout Delivery is a platform under Baidu's O2O services, specializing in food delivery services in China. It was officially rolled out on May 20th 2014, targeting mid-to-high-end white-collar user market. According to the company, up to the first half of 2016, this service had covered more than 140 cities in China. Now in the top 40 cities, Baidu Takeout Delivery is taking a leading position in white-collar user market. The delivery relies on both full-time in-house employees and third party couriers, with the average delivery time at 32 minutes. Baidu Takeout Delivery has a wide arrange of traffic contributors, including PC sites, mobile App, pubilc accounts on WeChat, and the access of "delicious food nearby" on Baidu Map.

Aladdin Data selected some of its key operational data in 18 first- and second-tier cities on 2016 Christmas Day, trying to outline its business expansion strategy. 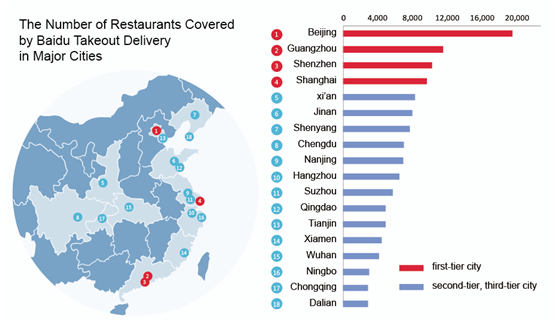 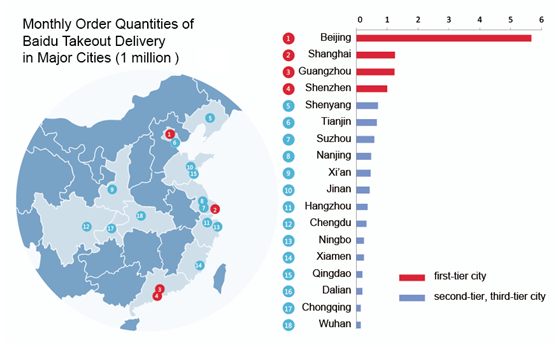 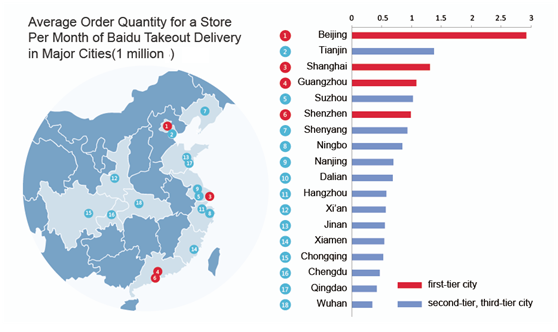 In terms of the average starting prices for delivery service, except for Chengdu and Jinan, all the other cities were all around RMB 20. Shanghai was RMB 25.4, the highest among all cities.

Beijing took a leading position in terms of delivery cost, which was nearly RMB 9. And the delivery costs in other cities were all around RMB 2-5. 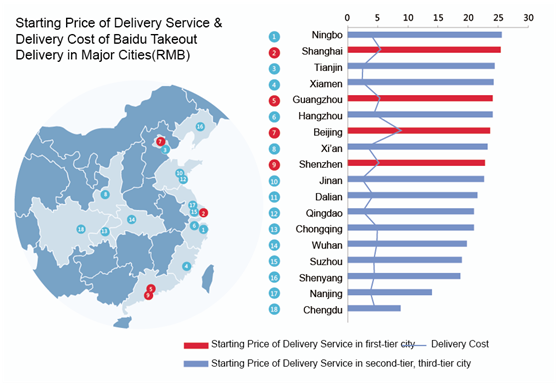 To sum up, Baidu Takeout Delivery develops more maturely in Beijing, with the market size, the number of covered restaurants and the number of orders per single store all significantly higher than other cities, so was the delivery cost.

Compared with Beijing, at current stage, we think the focus of Baidu Takeout Delivery in other first-tier cities as well as second- and third-tier cities will still be increasing the number of restaurant and developing users' habits. Delivery cost increase is expected to come up later after the markets get relatively more mature.