GDP Report - As Good As It Gets?

I just updated subscribers of EPB Macro Research on the GDP figures in a [Daily Data Flash] report.

Below is an excerpt from that report.

If you would like to read the full report and have access to the two model portfolios that go along with the analysis, you can click here for a two-week free trial. (The model portfolio is beating the S&P 500 by 8.0% in the month of October).

I hope you enjoy this free excerpt of a members-only [Daily Data Flash].

The GDP report came in slightly above expectations at 3.5%. To reiterate, the way GDP is reported is on a quarter over quarter basis. What that means is that the growth rates that are reported are Q3 divided by Q2 and then annualized.

The quarter over quarter method of analyzing any data point is not helpful at best and deceptive at worst.

Nevertheless, below is a chart on the breakdown of the GDP report, in real terms, the way it is reported, quarter over quarter.

As the chart shows, Real GDP increased 3.5% while consumption was up 4.0%. Housing fell 4.0% which should have been expected given how weak the housing data has been as of late. Government spending continues to rise, increasing 3.3% and most interestingly, business spending was flat at 0.8%.

Inventory (not in the chart) contributed 2.07% to the 3.5% headline figure or in other words, inventory was 59% of the gain in Q3. Inventory plus government spending was 75% of total GDP. 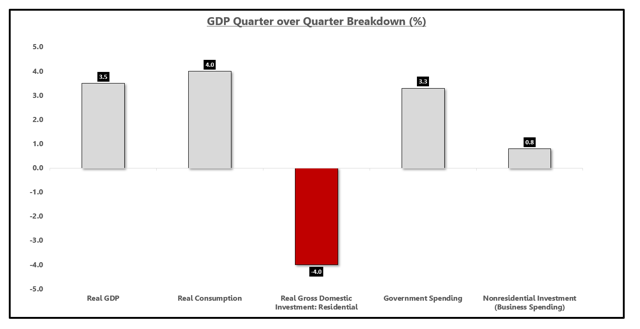 The better way to measure GDP or any data point for that matter is in year over year terms. This method simply takes the change in Q3 2018 over Q3 2017 to determine the growth rate over a four-quarter period.

Real GDP increased to 3.0% year over year and has now accelerated for nine quarters. This reading of 3.0% is likely to be the high water mark as GDP will now decelerate into Q4 and Q1. Inventory and government spending cannot carry GDP forward in perpetuity.

The rise in GDP growth seen in the chart came with a commensurate rise in interest rates. Now, the economy will have to "comp" nine quarters of accelerating GDP and that is unlikely to continue showing GDP increases but rather decreases. 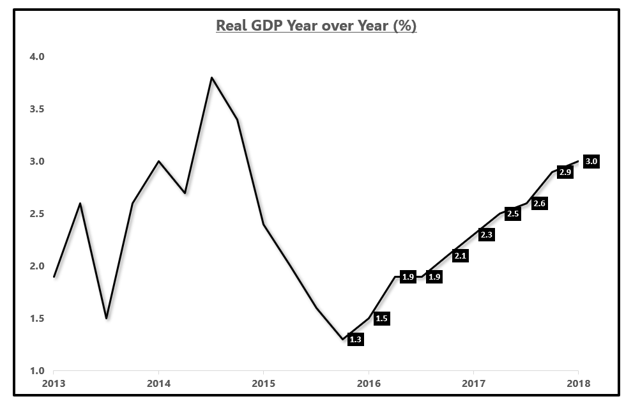 In year over year terms, consumption increased 3.0%, flat since 2015 but strong over the past three quarters. Given that consumption growth was over 4% in 2014-2015, consumer spending is moderate at best. 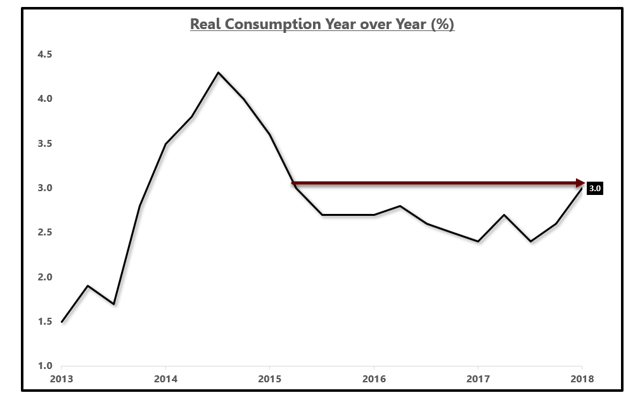 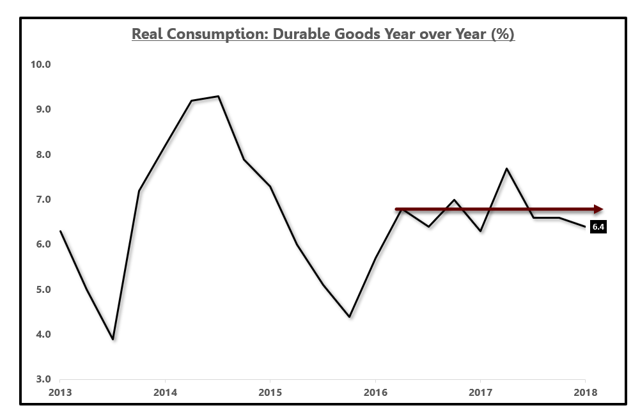 Residential fixed investment or the contribution to economic growth from housing has fallen to 0.4% year over year. Housing is the earliest indicator to roll over in the economy due to the sensitivity to interest rates. The sharp move lower in housing, autos and to a lesser extent, durable goods consumption forecasts that a rate of change slowdown in economic growth is highly probable in the quarters to come. 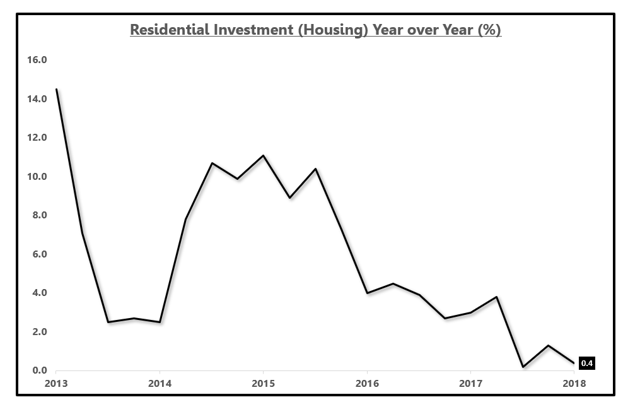 Real government spending has been soaring throughout the past several quarters due to tax cuts, spending bills and other budget line items, all of which have contributed to the growing deficit.

The acceleration in real GDP growth over the past nine quarters can be attributed to some degree to government spending which is an unsustainable source of growth, and one that is nearly guaranteed to reverse in the quarters ahead. If government spending growth declines from 2.4% growth to 0% as it did in 2016, or negative as it was in 2013, this will take a massive hit to GDP. 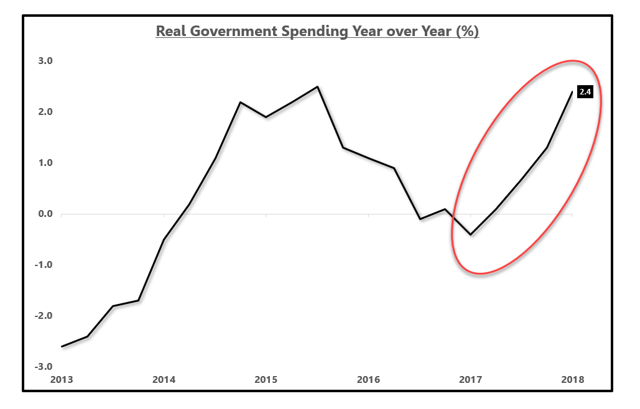 It is not fair to attribute all of the gains in GDP growth over the past two years to government spending growth as there was a material acceleration in nonresidential fixed investment, or business spending, that took place. 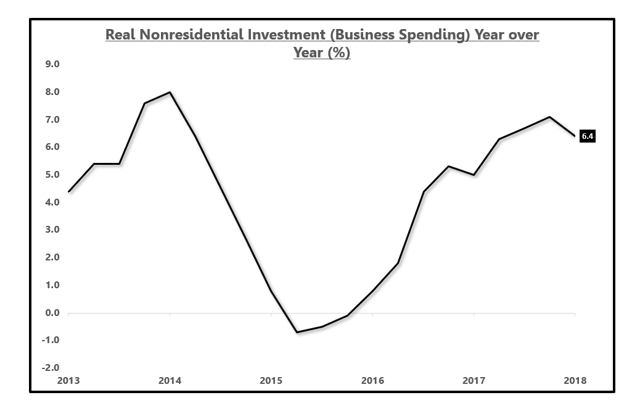 Many analysts and investors push back on the rate of change analysis saying that a move in GDP growth from 3.0% year over year down to 2.5% growth is okay because 2.5% is still "good".

There are several problems with this analysis. First, if assets globally are priced for 3.0% growth and then the growth rate falls to 2.5%, asset prices must readjust to a lower growth rate.

Calls for a deceleration in GDP growth does not mean a recession is near but it does mean that the rate of GDP growth will move lower.

Also, "good" or "bad" rates of growth are a subjective opinion. The market does not trade on any single individual's opinion on growth being "good" or "solid" or "bad".

Decelerating rates of GDP growth, which will occur in Q4 of 2018 through at least Q2 of 2019 will come with volatility and asset price re-adjustments. That is what we are seeing in the market today and over the past month. The market loved the rise in GDP growth from 2016-present, as it should have. Now it has to readjust to growth that is falling, not rising. Q3 is now in the past. The market is looking into Q4, and it sees slower growth.

If you want more reports like this and two model portfolios (long only and long/short) to go along with the analysis, consider a two-week free trial of EPB Macro Research.

A List Of Sectors To Avoid: Each month you'll receive a list of sectors (with ETFs) to avoid based on economic risks discussed in weekly reports. Focusing on "the rate of change" helps get ahead of potential declines. This list is at the bottom of every report for easy access.

A List Of Sectors We Like: Each month you'll also receive a list of sectors (with ETFs) that are favorable, even if they are not currently in the model portfolio. This list is at the bottom of every report for easy access.

Personalized Requests: Members of EPB Macro Research may request topics to be covered in each [Weekly Macro Theme] report. Confused on a topic or just want more information? Put a request in the member chat room and it will be covered in a full report.

Long-Term View: A long-term view eliminates the possibility of getting whipped around in choppy and volatile markets. We take a 12-36 month view on all positions.

A Focus On Downside Risk: Stock market investors have lost 50% in the last two business cycles. Our focus on economic shifts and downside risk make sure you are prepared for the next market decline.

Customizable Asset Allocation Models: The asset allocation models only use ETFs. This leaves you with the option to use ETFs to invest or pick your own stocks within the recommended sector. You'll improve your results if you are picking from the best sectors.

Quarterly Themes: 5 major themes to look out for over the next quarter that could have implications for your portfolio. By focusing on "the rate of change" in all economic data as well as identifying which of the 5 stages of the economic cycle we are in, our Quarterly Themes often front-run the mainstream narrative.

There is no risk in trying EPB Macro Research for a free two weeks. If you do not like the service, simply cancel at any point in the two-week trial, and you will never be charged.