I don't typically talk about my long positions but I do talk about the stocks that I either don't like or do not like enough.

My last article on China MediaExpress (OTCPK:CCME) discussed why the "official document" provided by the company lacked the reference number needed and thus was without administrative power. I also presented evidence that the company faked national level science awards for its patent.


The rumor has it that the company’s SAIC (State Administration for Industry and Commerce of China) filings mismatched its SEC numbers, and in this article I will present to the readers the original documents.
“Fa Piao” Is How the Chinese Government Fights Fraud

Before I delve into the evidences, I would like to comment on the significance of SAIC report. Many Chinese small-cap investors have been convincing themselves that the mismatch does not matter. In order to dodge tax, companies in China are under-reporting their revenues and thus such mismatches are common. If we were to believe that the SEC numbers are truer than the SAIC numbers, we would have to believe that the Chinese government is losing a lot of tax.
While tax dodging is rampant, the Chinese government is no patsy. What it came up is “Fa Piao” (invoice) system. While companies in the U.S. can issue their own invoices, companies in China have to issue invoices using anti-forgery invoices purchased from the government. A good description is here.
For the advertising business, the government charges 3-5% of revenue as business tax for the service rendered. The government knows the revenue of a company from the invoices. If a company is able to under-report its revenue number, it will have to issue less amount of “Fa Piao” than it rendered service to its customers. However, if the customer receives no “Fa Piao” for the service it purchased, it will not be able to count the amount in its cost, and thus will have to pay 25% corporate income tax for the under-stated cost. The economic loss for not receiving “Fa Piao” motivates the business customers to ask for “Fa Piao”; thus the government would know the true revenue.
The point here is that it is not easy for a company to significantly under-report its revenue to the Chinese government. It is as difficult (if not more so) for a U.S. company to under-report its revenue to the IRS.
SAIC and SAT Numbers Do Not Match SEC Filings

Below are the SAIC and SAT (State Administration of Taxation) filings I can gather for China MediaExpress. The original copy is available here and a translated copy here. The SAIC filing covers 2008 and 2009, including the balance sheet and the income statement. I purchased the SAIC filings from Qingdao Inter-Credit. The SAT filing covers 2008-10, which was obtained from within the SAT system. The SAIC and SAT filings match very well, but they represent only a fraction of the
SEC numbers. 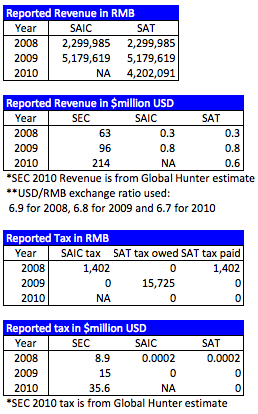 When I found the disagreement between the SAIC numbers and SEC numbers, it was a shock. I emailed Jacky Lam, the CFO, on why the difference existed. Lam gave me a one-line answer:

However, the quick answer to your question is that Fenzhong is not the only sub. in our group.

I later pushed Lam several times for further explanation on what other subs exist in the group, but my questions fell upon deaf ears.
The latest 10-K for the company clearly indicates that Fujian Fenzhong is the only sub of China MediaExpress. The organization graph can be found here.