A strategist, author and innovation expert, Kaihan Krippendorff teaches executives, managers and business owners how to seize opportunities others ignore, unlock innovation, and build strategic thinking skills. Companies such as Microsoft, Citigroup, and Johnson & Johnson have successfully implemented Kaihan’s approach because their executive leadership sees the value of his innovative technique. A former consultant with McKinsey & Co., Kaihan has spent more than a decade studying corporate conflict. He is the author of three business strategy books – “The Way of Innovation,” “The Art of the Advantage,” and “Hide a Dagger Behind a Smile.” Each text delves into the keys to true competitiveness and innovation. Kaihan identifies mental patterns applied by great military strategists – from Sun Tzu to John Boyd – and applies those strategies to modern breakthrough companies, such as Apple, Whole Foods, and Rosetta Stone. His approach teaches a systematic way to reveal strategic alternatives others ignore. By combining multiple patterns, companies can create disruptive strategies that trigger breakthrough performance. An expert blogger with FastCompany.com, Kaihan has also been featured in key business media outlets, including BusinessWeek, The Miami‐Herald, Harvard Business Review, National Public Radio, and Bloomberg Radio. Kaihan works regularly with ambitious large and medium‐sized corporations including Wal‐Mart, L’Oreal and Morgan Stanley. He has delivered keynote speeches for organizations such as Motorola, Schering‐Plough, Colgate‐Palmolive, Fortune Magazine, Harvard Business Review, the Society of Human Resource Managers, the Entrepreneurs Organization, and The Asia Society. He also regularly conducts programs as a faculty member of Wharton Executive Education, and he is a professor of entrepreneurship and strategy at Florida International University. Beyond his research into Eastern military tactics and his own entrepreneurial success, Kaihan has master’s degrees in business administration from Columbia Business School and London Business School, a Bachelor of Science in Finance from the University of Pennsylvania's Wharton School, and a Bachelor of Science in Engineering from the University of Pennsylvania's School of Engineering. Kaihan is fluent in English with conversational command of Spanish and German.

An idea is only innovative if adopted. Chicago University Professor Michael Csikszentmihalyi says there are two types of creativity. "Little c" creativity is coming up with something new and different. But "big c" creativity changes things because it is adopted and changes the world.

As Steve Jobs put it, "Innovation is creativity that ships."

Which is why we should consider the innumerable lists of most innovative or admired companies with some skepticism. Too often they're "cool" and different and fascinating, but are they really going to change the world? It will be the market, not us, who judges.

So six months ago I launched an effort to really measure what the most innovative tech companies are, not based on what I like, but as measured by the impact they are having on their market.

My colleagues and I assembled a database of 6,300 companies, tracking 5 to 10 years of data on 105 factors including sales growth and profit margins. We ranked these companies according to three factors:

For our white paper detailing our findings click here. 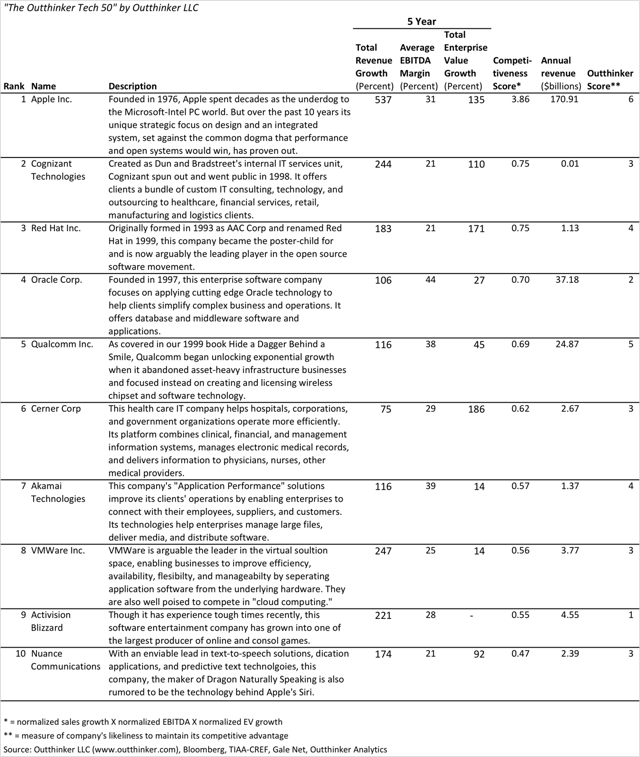