Student investor passionate about uncovering opportunities for excess investment returns. This page is for commentary on the global markets. These discussions can lead to further conversations with your financial advisor.

Let me first disclose that I am certainly no expert on this subject matter, these are just observations I’ve made. I find that this can be beneficial for the time being.

According to Bitcoin.org, the original website developed by the technology's founders, Bitcoin is "a new kind of money". Money, or currency, such as the U.S. Dollar, acts as a medium of exchange for society. The art of exchange is arguably one of mankind’s best traits, as it exposes that we have a constant need for the help of our fellow men and we fulfill it in a civil manner (at least we try). In its absence we would have two options.

Firstly, we could have nothing but a barter system, where goods and services would be exchanged for other goods and services. While barter seems efficient, it is complicated in a sense that a problem arises when, say, Bob is trying to exchange one of his sheep with Jim for a sack of potatoes. The popular verdict is that the sheep is much more valuable than the potatoes, so either Jim is going to have to spice up his side of deal or go without warm clothes for the winter. A second option is to deduce down to our most primal instincts. But, as Adam Smith put it best in The Wealth of Nations, "nobody ever saw a dog make a fair and deliberate exchange of one bone for another with another dog", for acting in the same manner as some of our mammal counterparts would almost certainly result in a lot of unnecessary conflict. Alas, humans are much smarter and came up with currency, which solves this double coincidence of wants, as it is at times impossible to undertake a transaction where units are indivisible yet demand divisibility. With currency, parties can be satisfied with making an exchange for just about anything. While the workings of currency are constantly evolving, it has to meet these qualifications to serve its purpose:

After meeting these qualifications, it is then that currency can act as a medium of exchange, provide people with a way to store wealth, and provide society with a convenient measure of value and unit of account (1)(2).

All of the above should be taken into account when thinking about the value of Bitcoin. I'll leave it to you, but I believe Bitcoin meets about 2 and a half of the five, severely lacking merit in bullets 1 and 2.

Today one U.S. dollar can get you roughly 1.18 Euros or roughly 22,700 Vietnamese Dong. Are these currencies universally backed by anything tangible? Not necessarily. They are by definition fiat currencies, just like bitcoin, but each of them do meet the 5 qualifications above and that alone makes them a medium for exchange, store of wealth, and a convenient measure of value and unit of account.

One can say that Bitcoin is in the development stage and it may eventually make its way to meeting all of the qualifications above. But that is just it, it does not meet them yet, and the market is perhaps pricing it like it has exceeded these qualifications! As proof of this in quanititatve terms, if we put its value in BTC/USD, the same notation as the above for Euros and Dong, one U.S. Dollar will get you 0.0001 Bitcoins. This raises the question of the actual intrinsic value that you get out of owning a Bitcoin or a fraction of a Bitcoin. Maybe to you the value is in the mathematics behind the creation of a coin. Or maybe it is the allure of the jargon that your high-tech nephew spewed at Thanksgiving dinner, who is 1,000% YTD while you are up roughly 22% with your position in "Growth Fund of America".

When thinking about Bitcoin and its role as both currency and an asset in general, ask yourself this question: How often is Bitcoin actually used for its purpose rather than simply being traded for a higher price? In other words, how often does the action of actually purchasing goods and services with Bitcoin take precedence over trading it for profit? This is the essence of something that is manically overvalued, something that is being speculated and not invested in. Nonetheless, you can’t put it past humans to take part in an occasional stint of over-speculation. It is one of our favorite pastimes; take a look at the tulip bulb prices of the 17th century, the U.S. housing market in 2007, or even the craze around Beanie Babies in the late 90’s. The core characteristic of a bubble is a sense of euphoria and optimism around a future value that eventually corrects itself- as, at the end of the day, you can offer to sell something at any given price, there just has to be someone at the other side willing to pay for it. The price of one Bitcoin has gone from about $900 USD to over $8,000 USD since this January. One could easily say that the valuation is subject to full-blown euphoria, a cappuccino full of froth but a questionable amount of espresso: 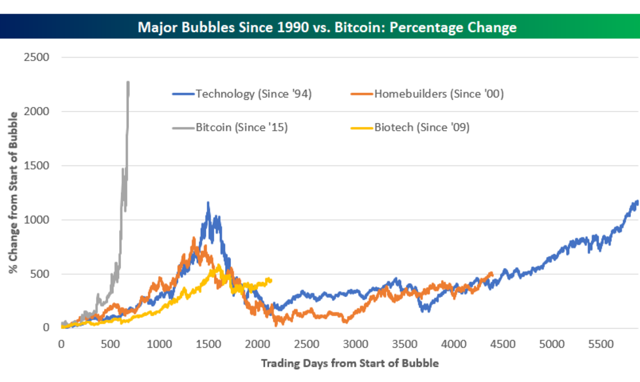 To return to the original question proposed at the beginning of this article: Who is telling you to buy Bitcoin and why? Last time I checked, the speculation around it is driven by a demographic of people who simply do not stand a chance of out-pricing who is really on the other side of the trade. If Bitcoin is actually adopted as it is intended, how much will everyone have to pay to enter the game? Who has the power to be on the winning side of this trade?