StockMetrix is at your service to make your stock market experience easier and more effective.Our experts work hard to help you get the best insights about the industry that dominates the market at the moment. 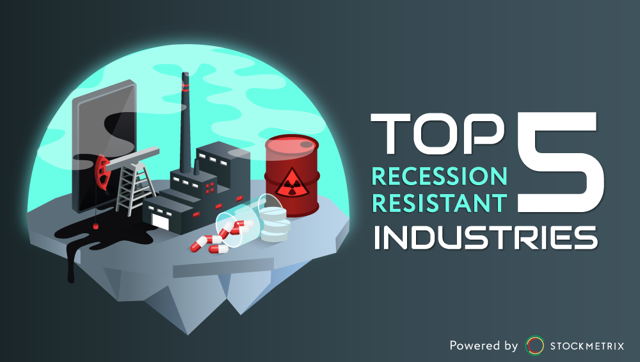 With all the rumors about the upcoming market correction that can be followed by a recession, I have started my own research with the purpose of finding the industries that have been the most immune to the past Recessions. In the process, I analyzed these industries’ current states and realized that anyone, not only me, would want to know where to locate stocks that will protect you from huge losses and show good dynamics at the same time. So here I share my research results and try my best to get you closer to finding such stocks.

There are some good articles about this on the Internet. All of them, however, give only theoretical reasons for industries to be Recession-proof and do not provide any information as to how these industries are doing now.

My approach is more practical. I studied one quarter’s Net money inflows and outflows of all USA industries using the StockMetrix software to determine which industries reacted least to the recessions of 2000 and 2008. This article discusses the industries with money flows that do not correlate with the US stock market movements in the period from 2000 to the present moment.

To approximate the industries’ money flow, I have applied the principle I used before for the stock’s technical analysis indicator – Money Flow Index (MFI). It uses both share price and trading volume to measure money inflow and outflow of the industry over a specific period (one quarter).

In addition to analyzing Net money flows of these industries, I have further examined them in terms of the four following aspects to understand how well they are currently performing:

So here is my take on the Top 5 Recession proof industries.

Surprisingly, Heavy Electrical Equipment is the industry that was least affected by the two latest Recessions as it did not experience significant investment outflows during them. Furthermore, it now shows 0% correlation with the stock market swings for the last 18 years. 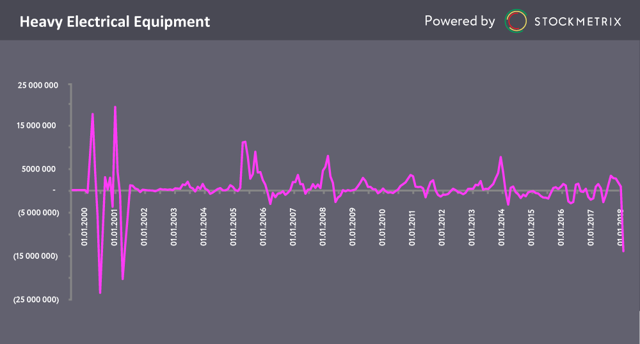 This industry consists of companies engaged in the manufacturing of large-scale electrical equipment that is utilized by the electric power providers. The constant demand for energy must have resulted in a consistent need of the products offered by these companies.

However, even though it seemed pretty stable during the previous Recessions, at the moment Heavy Electrical Equipment suffers substantive money outflows that total to about 700 thousand US Dollars as of today and are not that far from its historical minimum.

So currently, it is not in the best shape. A negative Net margin of around 21% makes it very unattractive for me. It’s even among the stock market’s Worst 10 industries in terms of Return of Assets. It’s a definite “No” for me.

Uranium Producers industry is the second most Recession-resistant industry on my list with 0.1% correlation of its money flows with the stock market movements. It did have its downturn during the 2008 Recession and experienced some money inflows and outflows, but have stayed relatively stable over the years. 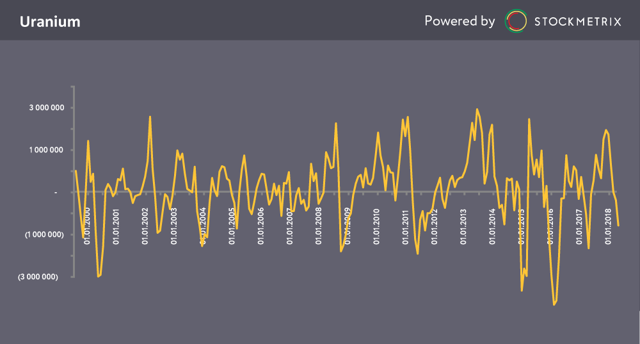 Uranium is critical for supplying the world with electric power. In many countries, it keeps the lights on. It is also the foundation of a global multibillion-dollar industry with an immense investment promise.

Maybe, because of this, the sector now enjoys considerable net money inflows of around 274 thousand US Dollars as of today. This industry’s current state seems even worse, however. Its average net margin of -161% is the lowest it has been since 1998. This is the worst Net margin in the entire stock market! Meanwhile, its Average Return on Assets is the third worst (-7.8%). So that’s not attractive either.

Companies from the Diversified Mining industry supply raw materials for the products and equipment of a wide variety of sectors, such as construction, automotive, aerospace, and telecommunications, etc. This industry’s broad reach is probably the reason why it is among the ones that have the least correlation with the Market meltdowns.

Diversified Mining reacted to the 2008 market crash with some money outflow and volatility that has lasted for about two quarters. After that, though, it started to recover and showed positive dynamics. 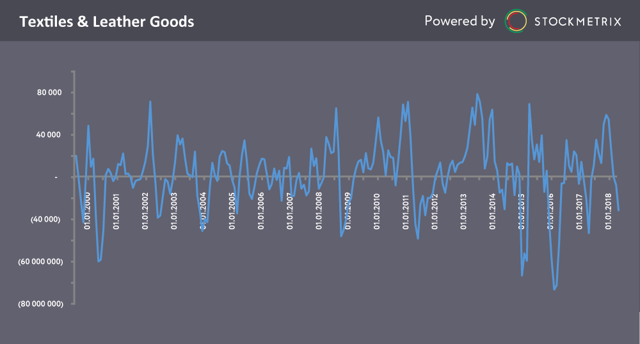 There is nothing notable in this industry’s current state analysis. Pretty poor Net margin and Operating cash flow ratio make it not worthy of further research.

There is a constant demand for oil and gas regardless of the current economic cycle. Oil is used for a vast array of products, from petrol to pharmaceuticals. Thus, Oil & Gas Transportation is considered the biggest sector in the world in terms of dollar value.

Oil sector companies depend on oil prices with their stocks having a direct correlation with the oil price and economic cycles. This, however, does not apply to the Oil and Gas Transportation. Oil is transported primarily by rail and pipeline, and a decline in oil prices or other economic events tend to have a mixed and often muted effect on these two enterprises. This is probably the reason why this industry has a reverse 0.86% correlation with the stock market movements.

This industry is showing considerable revenue growth (25%) over the last quarter. Combined with its good ability to turn Revenue into Cash (20% Operating cash flow ratio), this is a pretty promising sign.

In spite of this, though, this industry incurs net money outflows, amounting to about 5.2 million US Dollars as of today. There might still be a temporary come back to the money inflows in some time. I will keep an eye on this one, but be cautious with it since it has a negative Net margin, which means its companies are making losses.

The suppliers of mobile phones, broadband access, wireless handsets, and accessories have also demonstrated less reaction to the market downturns of 2000 and 2008. This industry has not displayed any considerable fluctuations in money outflows and inflows from 2000 up until 2015. 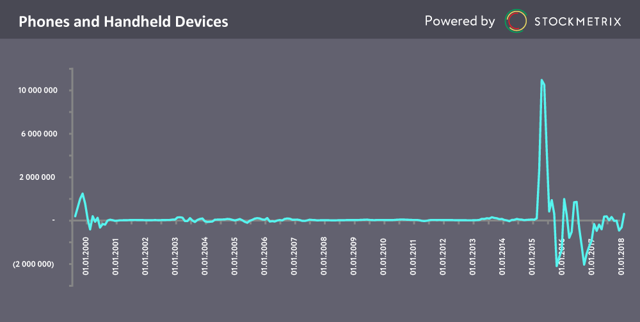 It’s currently showing a very high rate of revenue growth – around 41% – which makes it the 5thhighest growth rate in the market. I have also analyzed the Operating cash flow ratio to see how much real cash the company makes, and it’s pretty poor. For every dollar of the revenue earned, a company loses 33 cents. But this might be due to its high tech nature. Many companies within this industry might be in their product development stage, or early stages of product release. If this is the case, then they are worth following.

However, I am not choosing this industry either because with a Recession it’s extremely rare that the industry can keep up such a high rate of revenue growth.

Looking for a more impressive industry I have continued my search and looked deeper into the industries next in the list of the Recession immune industries, or the industries that have a small correlation of investor’s net money flows with stock market movements. The seventh lowest correlation industry on the list is the Drug Retailers with 1.4% correlation.

While evaluating Drug Retailers using these criteria, I’ve realized that it is quite a sustainable industry. Net margin and Return on Assets for it are currently at the levels higher than ever before: 3% and 19%, respectively. Impressive isn’t it? The Operating cash to Revenue ratio is a decent as well; the revenue is continuously stable.

The industry is currently experiencing temporary investors’ money outflow, but I consider the fundamental characteristics more critical. The market shall eventually recognize these fundamental qualities, making it even more attractive for potential investors.

None of the Top 5 industries seem to satisfy the conditions of being safe during a Recession and showing positive dynamics simultaneously. Drug Retailers, the seventh lowest correlation industry, however, seems to be quite promising to me.

I have used Thomson Reuters Business Classification when writing this article. You can find a list of companies that belong to a particular industry using the Screener function within the StockMetrix app.