Michael Noonan Edge Trader Plus Michael Noonan is the driving force behind Edge Trader Plus. He has been in the futures business for 30 years, functioning primarily in an individual capacity. He was the research analyst for the largest investment banker in the South, at one time, and he managed money in the cash bond market for a $5 billion pension fund using Peter Steidlmeyer’s Market Profile. Proficient in Gann, Elliott Wave, Market Profile, etc, Mr Noonan no longer uses any of those technical procedures. Instead, his primary focus is on developing market activity, relying solely on the information generated by the market itself, such as the interaction between price and volume, and how they relate to important price levels in the market structure. He incorporates proven market principles, such as knowledge of the trend, supply and demand, along with disciplined rules for to find developing high probability trade opportunities. He can be reached by e-mail at his website: mn@edgetraderplus.com

We advocate a proactive stance in managing one's stock portfolio as
the most prudent way to preserve and grow capital, by capturing gains and limiting risks. The days of buy and hold are finished, at this stage of a central bank propped-up market, fed by fiat and highly
questionable reports issued by the Bureau of Lies, which seems an
accurate assessment.

There are several charts to be shown, and where a picture may be
worth 1,000 words, we can limit we say and defer to what the market has to say. After all, the market is the best source and always the
final arbiter.

The trend is up. Price rallied strongly from a small reaction. The close
was strong and volume increased. These are all positives. A note of
caution comes from the lack of upside progress, an inability to rally
above the small range high from the previous week.

There is a clustering of closes, and that can lead to continuation or
a correction. Odds favor continuation, but we are mindful of the
previous cluster in July. Of course, the weekly chart is not used for
timing, so the daily chart comes next. 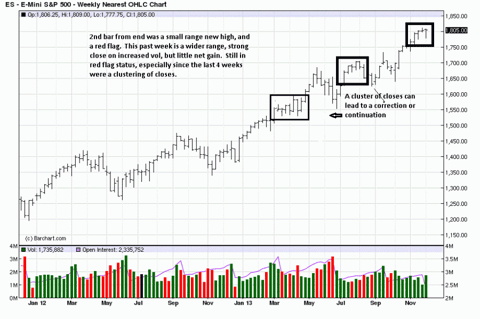 We like to see continuity, a story between the different time frames.
There is a series of higher swing highs and higher swing lows, the
easiest way to define an up trend. There was bullish spacing at the
November swing low. The mid-November swing high was the same
price as the next little swing low, so there was no spacing. This lets
us know that the market reaction was relatively weaker, but within
the context of being in an up trend.

Measuring the swing highs, at the left, confirms the lack of upside
progress on the weekly chart, and when seen in more detail on the
daily, the market is showing less ability to achieve greater net upside
progress, another sign of a weakening of momentum. It does not
mean the trend is changing, but just tiring. That could all change
next week with a sharply higher market, for example. Just stay with
the trend until there are greater signs of change.

If price fails to make new highs, next week, the note of caution would
grow, and individual stock performance[s] should be addressed,
relative to the index. 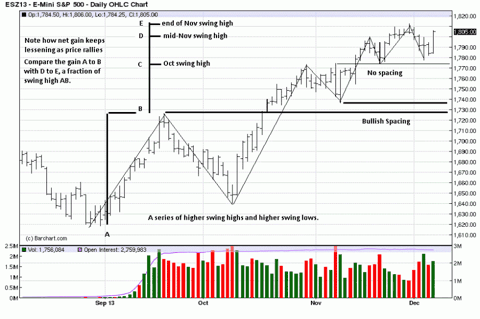 The Nas did make new highs, and continuation is expected for next
week. The breakout high followed a clustering of closes, an example
of how they led to more upside and not a correction. It is important
to compare individual stock performance with this index to know how
to respond to each stock's development. 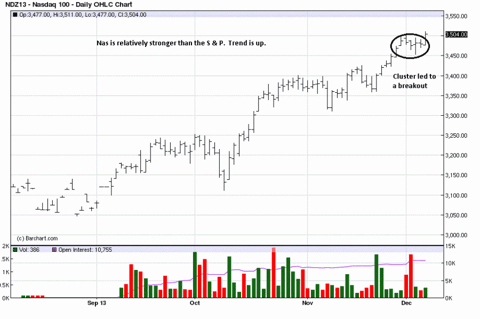 On 17 November, we gave one way to use developing market activity
for initiating new positions that provided an edge. [See Markets Talk,
Few Listen. Profit Is Only Objective]. It will review why each position
was taken. The same stocks are reviewed below.

This was what the chart looked like on 17 November. 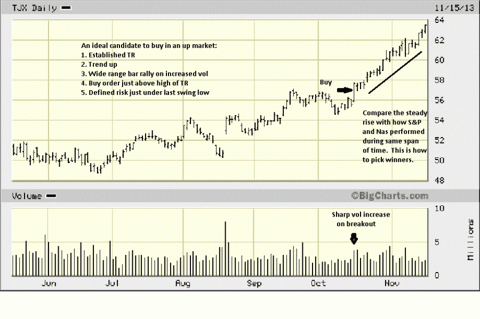 Buying "right" is important to provide a market edge and give time
in the trade. The first expectation is for continuation higher, or the
trade gets reassessed, even sold, if initial results fail to go higher,
relative to the overall market.

Whatever one's rules are for managing positions, [ You do have rules,
do you not?!], you can see there has been ample time to determine
whether to hold, take partial profits, stand aside, raise stops. Your
rules would determine your strategy. This was, and continues to be a good trade.

Relative to the overall market, TJX is not rallying in a similar fashion.
This is a small red flag to monitor the position closely. As a previous
leader, it should continue to lead or, if not, be cause for concern. 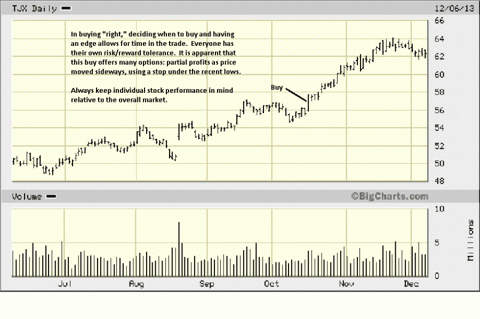 As of the time when this commentary appeared, SSYS was doing well. 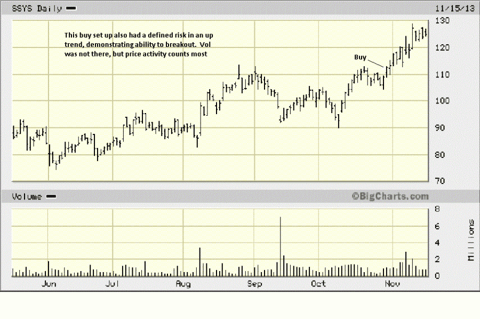 Reversal of fortune? Buying with an edge gave time to monitor
the red flag high that had a poor close. A single bar is not always
determinative, but it should be respected if there is more follow through to the potential reversal.

Next day, there was continued downside on increased volume. We
would have looked at an intra day chart to make a decision to stay
or cut loose, but assuming the worst, one could have exited at the
low of the day for at least a minimal gain. You can see how after
the next 10 TD effort, price was still weak, and this is a stand aside
to reduce risk exposure. 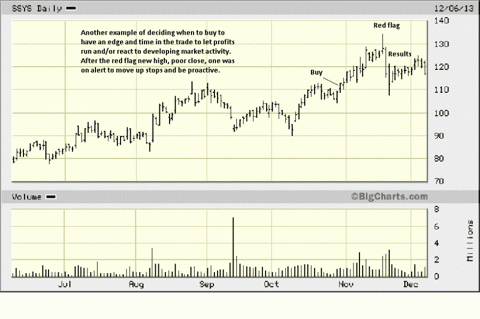 We noted the red flag high bar, similar to SSYS. This bar qualified as
an OKR, [Outside Key Reversal - a higher high, lower low, and in this
case, a lower close, not just from the previous day, but it erased the
previous 4 TD activity]. [TD = Trading Day]

Unlike SSYS, there was no immediate downside follow through. Our
message was, "Why stay with it?" That was due to a sideways move
while the markets were still trending up. The motive was to reduce risk exposure, not maximize questionable profit potential 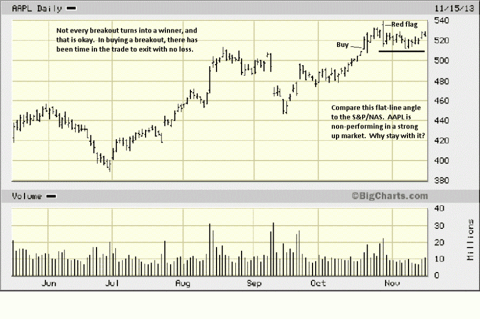 Assume a stand aside, there was little lost in the process. As it
turned out, the reaction to the OKR was weak, very little give-back to
the downside. What we know about weak reactions in a bull market is
that they usually lead to higher prices. Using the same basis for taking a long position in mid-October, the pattern repeated itself and led to
another buy the breakout opportunity.

This is a NAS component, and that index was holding well, giving
additional insight into expectations for the buy set-up. We would view the last two bars as another red flag to watch the position closely
relative to the overall market.

What we can take away from this is how to use pattern recognition,
combined with some rules for engagement in order to take a position
in the market that offers an edge. From the last commentary, DE was
an example of what NOT to buy, even though there were many
"investors" buying that stock, so there has been a variety of examples.

We recognize there are many other ways to get a market edge. This
is to demonstrate how even just one kind of pattern set-up can lead
to a profitable market experience. Why settle for less?

With an edge, you have time and opportunity in each trade to:
control and minimize risk, monitor the position for taking partial profits,
if warranted, and/or moving up stops to lock in profits should the
market reverse. You have the individual stock performance and
the relative overall index as another measure for how well, or not,
each stock is doing.

Sounds like a plan, does it not? And one that works, based on market
information and pattern recognition. 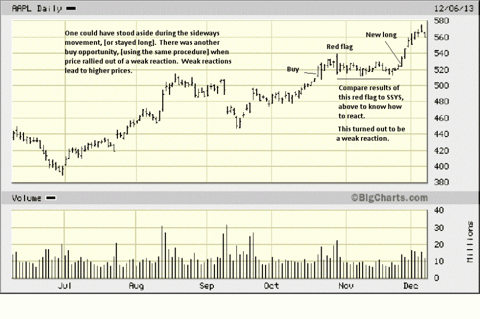