First up, lemme explain the situation.

If Congress doesn't get its act together by the end of the year, then there will be no choice but to implement 607 billion USD worth of automatic spending cuts and tax increases starting in January 2013.

To put this into perspective, Greece recently just passed additional austerity measures to the tune of just 13.5 billion EUR, or roughly just over 17 billion USD. Of course, it isn't fair to compare Greece to the United States, but you get the picture - that's a whole lot of spending cuts!

In order to avoid this, the White House, led by recently reelected President Barack Obama, is getting the ball rolling by starting now. Obama has scheduled meeting with union and corporate leaders in an effort to convince them that his balanced plan of attack (spending cuts and tax increases for the wealthy) is the way to go.

Furthermore, he's also rounding up high-level Democrats and Republicans later this week so that he can begin talks on getting a new deal done.

The problem of course, is getting the two parties to agree on anything.

Republicans want any deal to focus on increasing new revenue that the government can use to finance itself. They believe that limiting tax deductions and tax breaks would be a more effective way to raise revenue.

On the other hand, Obama and the Democrats want to end Bush-era tax cuts that benefit the top 2% of the earning population. According to Obama, eliminating these tax cuts, while extending tax benefits to the middle class, is a much better way to raise tax revenue.

Another issue that could prove to be a stumbling block is that Obama's goal is to raise 1.6 TRILLION USD in tax revenues. When the government tried striking a deal in 2011, they couldn't even agree to one that would raise just 800 billion USD. It's no wonder Obama wanted to get to work early - it's going to take a LOT of wheeling and dealing to come up with something that everyone can agree on!

Whatever solution the government chooses to implement, the fact remains that the protracted discussions are creating a lot of uncertainty in the market. If a deal isn't done soon, it could push the U.S. over the fiscal cliff, and lead to hard spending cuts. The Congressional Budget Office believes that the U.S. economy may even fall back into recession. 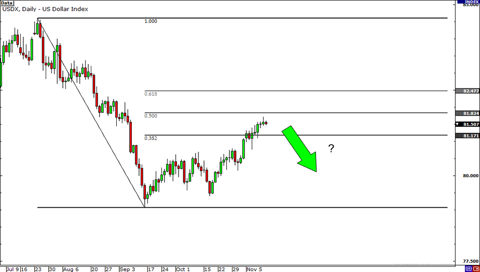 The charts seem to agree. A look at the U.S. dollar index chart shows that price has pulled back from its September lows. However, significant Fibonacci retracement levels are coming up that could serve as major resistance levels. If uncertainty regarding the U.S. fiscal cliff continues, we could see a resumption of the downtrend we saw during the third quarter.