One quick glance at USD/CAD's weekly chart would reveal that the Loonie had quite a topsy-turvy 2012. Aside from the Greek bailout troubles and U.S. fiscal concerns that rocked risk sentiment over the past 12 months, the Canadian economy also had a lot of drama to deal with during the year. 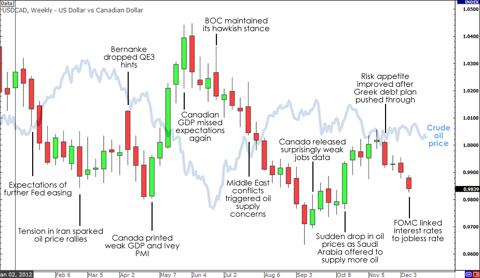 1. The BOC was one stubborn hawk!

While central banks all over the globe have been cutting rates and pumping more money into their respective economies, the Bank of Canada refused to budge from its hawkish stance. At one point, BOC Governor Carney even talked about withdrawing their monetary stimulus sooner or later!

Canada's economic figures, however, painted a completely different picture. For instance, manufacturing and production suffered almost the entire year as weak global demand took its toll on Canadian exports. This translated to a downturn in business investment and hiring, which later on weighed on spending and overall economic growth.

Despite all that, Carney kept reiterating that the Canadian economy is doing very well and that tighter monetary policy might be appropriate. This prompted several market watchers, including Pip Diddy whose glasses are already three inches thick, to wonder if BOC Governor Carney needs to get his eyes checked.

The Iranian oil embargo, tensions in the Middle East, tropical storm Isaac, and the oil inventory pile up are just some of many the factors that put oil prices and the Loonie on a rollercoaster ride that lasted almost an entire year.

During the first few months of 2012, rumors of a nuclear program in Iran sparked concerns about an oil supply shock as the U.S. and EU imposed an embargo against importing Iranian oil. The resulting oil price rally was stoked further by worsening conflicts in Libya and Syria, which posed a larger threat on global oil supply. At that time, rising oil prices were enough to keep the Loonie afloat against most of its counterparts.

Towards the latter half of the year, black crack took a sharp dive after the White House announced that all options for dealing with rising oil prices are on the table. Crude oil prices were pushed even lower when Saudi Arabia offered to supply more oil just to keep prices down. Later on, the U.S. crude oil inventories report for October signaled a potential oversupply, triggering a selloff in oil and the Canadian dollar.

It looks like the last part of 2012 wasn't the happily ever after that Canada was expecting as its economy still faced several headwinds during the period. For one thing, the sudden and unexpected drop in employment in August triggered a series of unfortunate events for the Canadian economy as it resulted in a downturn in spending and eventually poor GDP readings for the latter half of the year.

Will BOC Governor Carney finally admit that the Canadian economy isn't doing as well as he imagined? Well, he probably won't get a chance to do that anymore since he's slated to leave the BOC, jump across the Atlantic, and head the Bank of England!

Some analysts were quick to point out that one of the reasons why Canada's economic growth is faltering is that the BOC is currently going through a transition period as the search for America's next top model - oops, I meant next BOC Governor - is already underway.

Although the top spot for the BOC is still up for grabs, 2013 is bound to be an interesting year for both the central bank and the economy. I'll keep you posted on Canada's economic developments and their impact on Loonie price action so stay tuned for my updates!