Tomorrow, at 12:30 pm GMT, the U.S. Bureau of Economic Analysis (BEA) will release the preliminary GDP report. Since it is considered as the broadest measure of economic activity, it is closely watched by traders and analysts alike.

The preliminary report is the also called the second GDP release, as it shows the revisions on the advanced GDP report released a couple of weeks back. Normally, higher numbers are good for the currency (the U.S. dollar in this case), and lower numbers are seen as bad.

Economists say that the first reading was too high. Growth for the first quarter of this year is expected to be revised down to 1.9% from 2.2%. 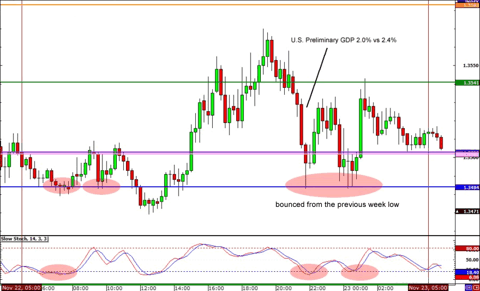 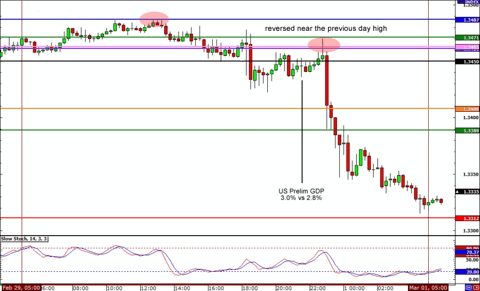 Based on the past two releases, it appears that EUR/USD's initial move faded upon reaching a major inflection point, regardless of how the results come out. From there, the bounce lasted from a minimum of 50 pips to a maximum of 150 pips.

How do I trade this?

If you're planning to trade this event, it might be best to sit on the sidelines during the initial move then wait for the price to stall at a major inflection point or at weekly levels. It could also help to watch out for reversal candlestick patterns on those levels to determine when to jump in.

If you're a conservative trader just like Happy Pip, you can aim for the minimum bounce of around 50 pips. But if you want to aim high and go for gold like Cyclopip usually does, you can try setting a 150-pip profit target.

A tight stop of 20 to 30 pips above or below the reversal candle is probably enough leeway for this setup, as it gives you a decent reward-to-risk ratio.

Of course, as mentioned in our risk disclosure, nothing is set in stone in the forex market as anything can happen! As traders, the most we can do is find our edge by playing the high-probability trades, sticking to the trading plan, and managing risk properly.