Regarding a fractional reserve banking system, the Rothschild brothers once said "The few who understand the system, will either be so interested from it's profits or so dependant on it's favors, that there will be no opposition from that class." I tutor graduate level economics, have read the original works of Smith, Marx, and Keynes for fun, and probably understand more about economics than is healthy for any person to. But most of what I have learned has not been from a textbook or a classroom, but from trying to eek out a living as a small business owner, starting from scratch, in a heavily anti-competitive, almost mercantilist industry that is overtly hostile to the new or little guy. The following are my 10 principles of economics: The Path to Prosperity Many of the policy decisions that impact our lives are made based on mistruths about and misunderstanding of what it takes to create prosperity. I’ve compiled a list of the truth antidotes to some of the most notorious of these. Some of my principles can be found in textbooks. Some cannot. Some directly conflict with what is in most textbooks. Nevertheless they are all based on sound theory, on historical evidence, on common sense, and on independent critical thinking to answer the key question: “How do we create the most prosperity for the most people?” 1. Falling prices are natural; falling prices are good. Fighting this steals from the working class and gives to the investor class. 2. Your contribution to society is what you produce, not what you consume. Paris Hilton is not the model citizen for creating prosperity. 3. Paying a man not to work does not create wealth; it only transfers it. 4. Business regulations help big business and big government at the expense of small business, consumers, and workers. 5. A tax cut on another man helps you when compared to no tax cuts for anyone. But when compared to a tax cut for yourself, the choice is clear which is better for you. 6. Tomorrow’s prosperity comes from today’s savings, regardless of who is doing the saving. 7. Central planner policies that help sellers and producers do so by hurting buyers and consumers. 8. Public money should not be spent on private consumption. 9. To privatize profits but socialize losses is to steal. 10. There is no shortage of jobs. There is only a shortage of money to pay for those jobs. To cure this shortage we need to stop wasting money on jobs that do little to no good for us, and we need to allow more people to do what the bottom-up power of the free markets want as opposed to what the top-down power decree of government wants. For every young man fighting an unnecessary war, there is one less man who can teach 3rd grade and coach little league. For every MVA worker, there is one less worker available to pickup trash or plug potholes. For every genius who goes into accounting to demystify our tax code, there is one less genius to go to engineering school. We will never hit our goals if we keep aiming at the wrong targets.

Sequentially, deflation would raise real wages, which would shorten the average work week, which would spur new hiring.  Contrary to the deflation=depression mantra of mainstream economics, evidence suggests that deflation and prosperity can co-exist, and in fact deflation raises real wages (I wrote about it here:  https://seekingalpha.com/article/207254-what-s-the-cost-of-an-inflation-free-bank-bailout).  The backward bending supply curve of labor argues that as wages increase past a certain point, people work fewer hours.  It has also been estimated that for every 6 minutes the average work week is shortened, 315,000 new employees must be hired to replace the lost output (http://m.cnbc.com/us_news/37552106/1).

The backward bending supply curve of labor explains the concept that for most people there is a point at which additional leisure time brings more pleasure than an additional car, or house.  It states that as wages increase workers will initially work more hours due to the substitution effect making labor more valuable relative to hours not worked.  But past a certain point the income effect dominates as workers can achieve their desired level of consumption/living standard making leisure time more valuable. 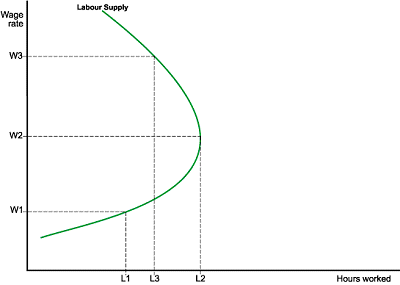 Essentially it says that money can't buy you happiness past a certain point, but up until that point it does.  A study showed for most people that point is about $100,000/year.  http://www.princeton.edu/main/news/archive/S15/15/09S18/index.xml?section=topstories  "Money does make a difference when it moves you from abject poverty into the middle class, but it stops making a large difference at about that point. In terms of happiness, the difference between making $5,000 a year and $50,000 a year is dramatic, but the difference between making $100,000 and $100 million is negligible, almost nonexistent."-Nobel Prize-winning psychologist Daniel Kahneman

As wages increase to the backwards bending portion of the curve, hours worked decline.  In order for the economy and employers to maintain the same level of output unemployed workers must become employed workers.  Think France's 35 hr work week, or Germany's 4 day work week, only instead of coming from a government decree, it arises from free market forces currently being crushed by central planning (banking).  While working less, earning more, and lowering unemployment may sound too good to be true, we must remember that the primary affect of inflation or deflation is not on national output but on national income distribution.

The idea of a shorter work week to reduce unemployment is not new.  The idea that those shorter weeks could be achieved through free market banking is.


Disclosure: none
To ensure this doesn’t happen in the future, please enable Javascript and cookies in your browser.
Is this happening to you frequently? Please report it on our feedback forum.
If you have an ad-blocker enabled you may be blocked from proceeding. Please disable your ad-blocker and refresh.