Los Angeles based investor, analyst, and strategist for domestic and international markets.  More than 20 years experience investing in private and public companies both in the US and abroad.  Skilled in technical analysis, financial modeling, portfolio management, rapid analysis, options, fundamental analysis, and trading systems.  Lubaszka studied investment valuation as an undergraduate and participated in the Harvard Business School Executive Education Program.

It is a well-established fact that the widely-diversified transportation sector including airline companies, railroads, truckers, shippers to name a few, has struggled in the past.  Sector participants have been plagued by a number of headwinds like disruptions from back-to-back hurricanes, the devastating earthquake in Mexico, declining automotive volumes, issues related to customer dissatisfaction and high costs (labor as well as fuel).

The lackluster performance of the sector in the first nine months of the year can be seen from the graph below. 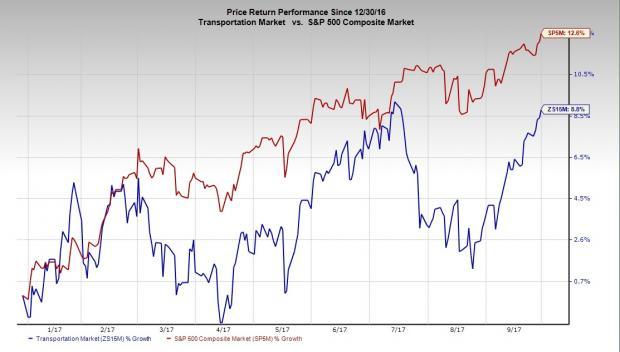 Uptrend Over the Last Few Months

However, matters have been changing for the better over the past few months on the back of several tailwinds. Iam optimistic about the fact that the sector has outperformed the S&P 500 index in a month. 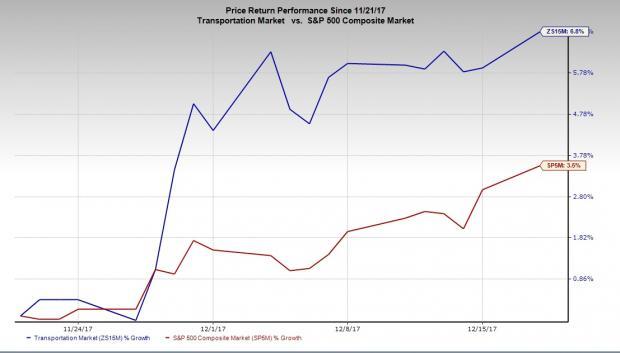 Railroads Poised for a Great 2018

Railroads have been benefiting since the beginning of 2017 after struggling for the past couple of years. The prime factors contributing to this improved scenario are increased coal and intermodal revenues.

Particularly with President Donald Trump's presidency, the coal industry is seeing better days. The President is aiming to revive the industry by relaxing regulations, which were hurting its prospects.

The rise in natural gas prices is also favorable to boosting demand for coal. Moreover, per the U.S. Energy Information Administration (EIA), coal production in the United States is expected tol increase. Since revenues from coal contribute significantly to the railroads' top line, any positive development for the commodity means good news for the sector.

Apart from coal, the scenario pertaining to another key source of revenues for railroads and intermodal, has improved by leaps and bounds this year. In fact, intermodal shipments are expected to grow. This in turn will drive the top line for railroads.

Moreover, railroads like Union Pacific Corp. UNP have hiked their quarterly dividend payouts this year, indicating their financial prosperity. The solid financial status of these companies bodes well for the future.

Recovery of the U.S. economy is also likely to pave the way for railroads. Notably, U.S. GDP is expected to increase by 2.4% in 2018, higher than what was achieved in the last two years. Generally, a buoyant domestic economy results in an uptick in rail shipments of goods across the United States.

The improved economic scenario is evident from the fact that the domestic economy expanded at an impressive annual rate per the latest report from the Commerce Department. The reading was above the consensus estimate.

The biggest overhaul of the U.S. tax code in 30 years is a positive for the transport companies and should propel the sector's growth. Corporate tax rate being lowered from 35% to 21% as a result of this move improves conditions for investors.

As and when the companies are able to reduce capital expenses in the year of their occurrence, their tax bills for the year would be lowered significantly due to higher deductions. This will in fact leave more cash in the hands of these companies to fund their capital expenditures, acquisitions, share repurchases among others.

Notably, FedEx Corp. FDX has already indicated that it will increase spending on its various logistics and delivery businesses with the windfall payout the tax cut will grant.

Apart from railroads and package delivery companies, stocks belonging to the airline space are also expected to be huge benefactors from the U.S. tax overhaul. The capital-intensive nature of the industry implies that the above-mentioned benefits pertaining to capital expenses should assist the carriers as well.

Since most airline companies are almost entirely exposed to the statutory corporate tax rate, the massive tax cut is expected to help them save a considerable amount in tax payment in the United States.

I expect a rosy view for carriers with respect to profitability levels.  I expect global net profit of $38.4 billion for the industry. This is much higher than the 2017 profitability forecast of $34.5 billion (increased from the $31.4 billion predicted in June). This bright projection despite increased costs can be attributed to the strong demand for air travel.

The top line is predicted to come in at $824 billion next year compared with $754 billion, forecast in the current year. Cargo revenues are likely to increase to $59.2 billion for 2018.

The research firm has also predicted that the average net profit per departing passenger would be $8.90 in 2018 compared with $8.45 in 2017.

Moreover, the bullish unit revenue forecasts projected by several carriers in the recent times reflect their easing revenue related woes. Notably, in December, JetBlue Airways JBLU provided a raised guidance for the fourth quarter. This company now expects RASM in the range of down 0.5% to up 1.5% (on a year-over-year basis). The revised view reflects an improvement from the prior outlook of a decline of 3% to flat year over year.

Southwest Airlines LUV now anticipates operating revenues per available seat miles (RASM: a key measure of unit revenues) for the fourth quarter of 2017 to increase 1-2%, higher than the previous guidance of a slight rise of up to 1.5%.

With things looking up for the transportation sector, we have zeroed in on four stocks with potential to outperform in the upcoming year.

4 Stocks To Buy And Hold
Given the vast size of the sector, it is no mean task to zoom in on the likely outperformers for the coming year. This is where justifying a company's strong fundamentals, can come in really handy.

Deutsche Lufthansa AG DLAKY , commonly known as Lufthansa is one of the largest German airlines and is headquartered in Cologne, Germany. The company has a market capitalization of $16.59 billion. The forward price-to-earnings (P/E) ratio for the current financial year (F1) is 8.3, lower than the industry average of 11.1.

The stock has outperformed the Transportation sector 's gain so far this year. 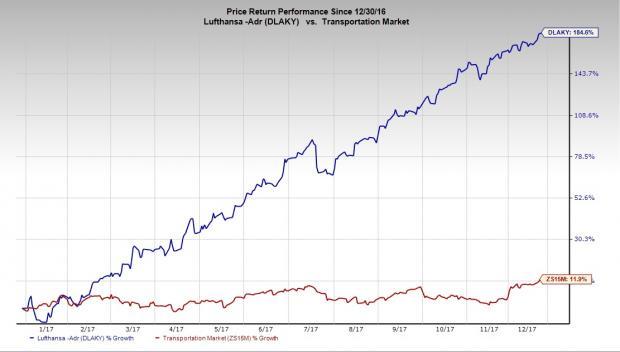 FedEx Corporation offers customers a one-stop source for global shipping, logistics and supply chain solutions. This company has an encouraging expected earnings growth rate (next 3-5 years) of 12.8%, higher than the industry's 11% growth. The forward price-to-earnings (P/E) ratio for the current financial year (F1) is 20.1, lower than the industry average of 26.5.

The company has a market capitalization of $63.95 billion.  Additionally, the stock has returned consistent growth figures. 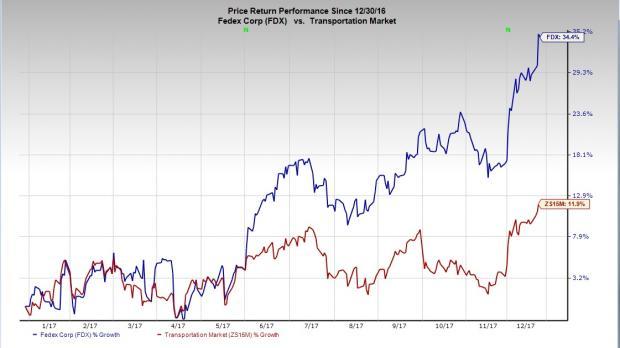 Gol Linhas Aereas Inteligentes S.A. GOL is a low-cost, low-fare Latin American airline, headquartered in Sao Paulo, Brazil. The company has a market capitalization of $1.43 billion and is a top ranked company.  The stock has seen my revised estimate for 2018 being revised 23.7% upward over the last 90 days. 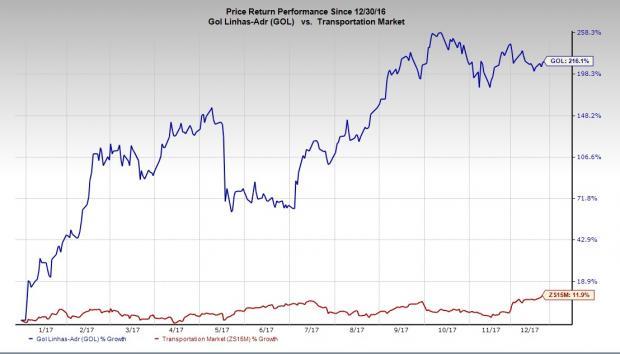 SkyWest, Inc. SKYW is the holding company for two scheduled passenger airline operations and an aircraft leasing company. The company carries a high expectation and has a market capitalization of $2.70 billion. 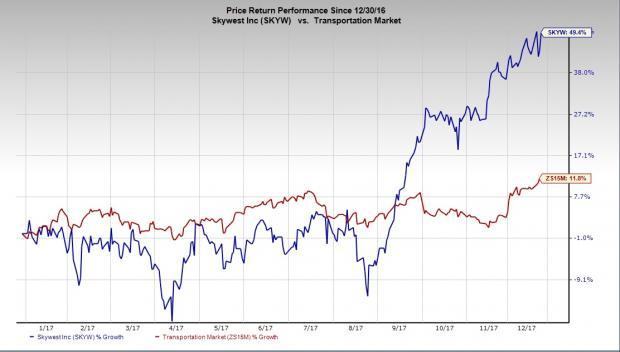