As a retail investor, I have confronted a process of hard learning and bumping into reality. At first, I found in factor investing a simple answer against a universe of stocks wide and with many edges. My innocence made me think that with a screener I could capture the subtleties and thus simply beat the market. The reality, you already know.

The investment case in XPO is one of those that will not appear in any screener. I will try to write in this article why I think that the generation of value is in qualitative data that surrounds business.

XPO Logistics bases its cash flow generation on three large business areas. Those are an all-in-one solution for the customer seeking efficiency, security and speed when outsourcing their logistics, transportation and related services.

Whenever I try to understand how a company works and what its business areas are, I have the automatic moats search on. In the case of XPO with its contract logistics line, it generates what is called switching costs. For their clients, if the activity generates real value, it is difficult for them to change provider. This is demonstrated with a contract renewal ratio of 95% +. The other strong point of this line of business is the recurrence of sales, since the contracts are long-term signed at 5 years.

A deeper insight into this XPO core business leads us to sustain the claim that with the EBITDA generated only in it, the interest payables by the entire company can be covered.

This is the area where there is a huge cash generation since the activities are basically the brokerage of goods (demand) with trucks and transporters (supply) in the most efficient way possible.

In this area of ​​the business, XPO reveals another moat. The so-called network effect that has generated in the US and Europe covering 90% of these territories make the business tremendously profitable.

This area is less romantic than the previous two and the margins as well as competition are more challenging. Basically XPO depending on the country establishes a series of routes that operate with their own trucks (or not, it depends on the country) and that go from trailers, last mile and Less-Than-Truckload, which are trailers whose total load is shared by several customers to optimize travel.

This business area is protected in a supposed case of global contraction because, according to simple calculations, if XPO generates 0 cash flow in this activity, it could repay its debt year after year.

In addition, it is protected by a moat against competitors. XPO from the beginning has opted for large accounts and having its own network of trucks and centres makes large customers such as Amazon, Zara, Ikea, Carrefour, Nestle or Danone trust the company and pay for their All-In-One services.

Previous cited moats are nothing else but a way to reduce the risk of our valuation. Knowing risk should be taken as uncertainty, rather than volatility of the stock. Those moats are expanding and increasingly reporting value.

Other quantitative data of the company is that it has a market share of 1.5% global, then there is still a long journey for XPO and to continue growing above the market. It is found in 32 countries, in 1,455 physical locations. Its main source of income is US (60%) followed by FRA + UK + ESP (30%), the rest of the activity is found in Europe and Asia.

Returning to qualitative data, we can say that XPO has an edge over the competition that allows it to perform above the market, based mainly on mergers and acquisitions.

Logistics was a very fragmented sector with deficiencies that XPO is knowing how to solve, buying small businesses and integrating them, thus gaining scale and efficiency.

Behind all this is the CEO of the company Bradley Jacobs. Who funded the company in 2011 with its own 70 million.

Bradley started his career in 1979 and already in 1988 led a $ 1Bn company. But its great success in consolidating sectors was during the 90s. It led United Waste to be the 5th company in the solid waste business through mergers and acquisitions. Exceeding the SP500 index by 5.6 times over a period of 5 years. He then repeated his success at United Rentals, the largest rental equipment company, which beat the index 2.2 times in 10 years.

Not only the management experience is excellent, but also its alignment with the shareholder. 18.5% of the company's shares are in the hands of insiders. Of 8 directors, 6 are independent and 80% of their compensation is linked to the achievement of variable long-term objectives.

The management team, led by Bradley, has known how to carry out recent acquisitions such as Con-way. A strategic competitor for the Less-Than-Truckload business and which was acquired by x3.3 times EBITDA (after synergy). This multiple represents a 50% discount to the usual ones in the sector (average of 7-x8 times).

The team is currently facing a deleveraging of all the debt absorbed in the expansion process. It is without a doubt XPO's greatest risk today. The company in its latest report revealed that despite having 80% of its debt falling more than 2022 and not being subject to covenants, a rate increase of 1% would lead to 15 million extra annual interest.

The management team takes this into account and is deleveraging the company year after year.

The base investment case is based on buying the company at the current prices after the selloff of the last week produced by a bearish thesis of a large fund that did not honour the reality of the company.

They affirmed manipulation and accounting malpractice. Against this, XPO denied in a statement all the accusations of malpractice and corrected the errors of form and calculations of the bearish thesis.

XPO in a master of good allocation of resources and seeing the price of the stock at $45, announced the approval of repurchase of shares by 1Bn.

Nothing has changed in the fundamentals of the company since October and drag a drop of more than 50% in the price. This would imply a 100% revaluation at the levels that the market paid for the quality that XPO offers in the long term.

The consensus assumes an 8% growth for next year. In my thesis I will assume this data and we will see how a good XPO is at these mid-50's prices. In my opinion XPO will continue to grow above consensus, as it has done in the last 6 years, and above the market, but because I am conservative, I will take that 8%.

Likewise, with the expansion of margins, there is a firm guide to increase margins of both FCF and EBITDA, although for our valuation the current margins will be taken into account, in order to be conservative and to show that even in a non-dynamic scenario passive of the company, is a value at a very attractive price.

The recovery of the price of the stock may come unleashed by certain catalysts such as the presentation of results at the end of the year in line with the current consensus and that is not reflected in the price, compliance with 1Bn of FCF since 2017 and a greater reduction of debt.

The management has met guidance for 6 consecutive years. Now with the doubts surrounding debt and accounting it has disappeared from Mr Market’s mind overnight (since October actually).

The biggest problem that XPO has had in the last quarter has been the bankruptcy of an isolated client, which undoubtedly has overexcited the market and has produced together with the previous mentioned short thesis the collapse and opportunity for us, patient investors in quality and value.

Other internal factors such as the reduction in the number of outstanding shares that increase EPS and the long-term improvement of EBITDA margins can continue to make the market optimistic as it was in October.

The target price of the share cannot be determined, but rather as a broad and dynamic range unable to collect all the factors of the market. Therefore, I put down the screenshots of my calculations, which should be taken with caution and distance. Again I put all my effort on understand the quality of the business and then being comfortable with buying it at a reasonable price with enough Margin of Safety to be wrong.

The DCF method yields a price of 78 USD / sh, while the X7 times EBITDA valuation of 2021 (market multiple for the sector) yields 99 USD / sh. The logical conclusion is a large margin of safety at current prices, also assuming a base case quite static and away from what has been XPO in recent years.

In line with these conservative results based on restricted growth hypotheses, the management has a price target of 86 USD / sh by September 2020, we have already said that they have complied with the guidance in the last 6 years.

Then it is reasonable to think of the environment of 90 USD / sh as the target price in the near future. 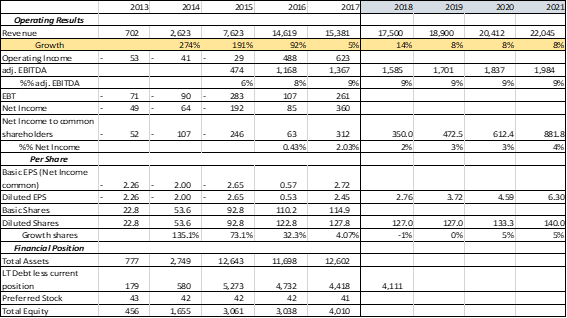 Disclosure: I am/we are long XPO.