Today, USD-traders are likely to lock their gaze on Jerome Powell’s semiannual testimony.

The Fed Chief will testify before the Senate Banking Committee today, while he will deliver the same speech on Wednesday before the House Financial Services Committee.

The pound was the main winner among the G10s yesterday, gaining after a report said that UK PM May is considering a plan to delay Brexit.

Today, May is scheduled update lawmakers on her progress with the EU and investors will be eager to see whether she will indeed announce such a proposal.

The dollar traded lower or unchanged against most of the other G10 currencies on Monday. It gained only versus CAD and JPY. The greenback traded virtually unchanged versus CHF and NOK, while the main gainer was GBP. 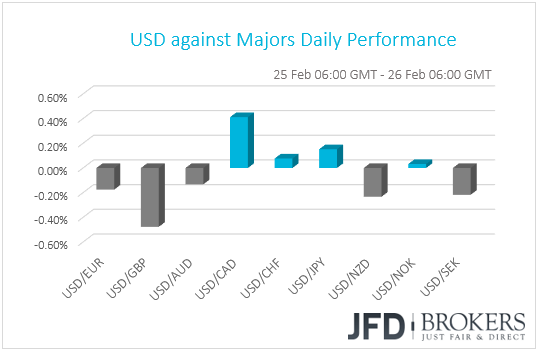 The risk-linked currencies AUD and NZD remained on the front foot against their US counterpart, while the safe-havens JPY and CHF failed to capitalize as markets traded in a risk-on mode following US President Trump’s decision on Sunday to delay the March 1st deadline for the US and China to finalize a trade accord. The US President said that last week’s talks, which were extended by two days to Sunday, were “very productive” and that assuming further progress, he will be planning to meet with his Chinese counterpart Xi Jinping soon in order to seal a deal. Indeed, Asian stocks surged after Monday’s opening, with China’s Shanghai Composite index gaining nearly 6%. The sanguine sentiment rolled over into the EU and US bourses but eased during the Asian morning Tuesday, with Nikkei 225 and the Shanghai Composite retreating 0.49% and 0.67% respectively.

The Canadian dollar was yesterday’s main loser, perhaps feeling the heat of the slide in oil prices. The “black gold” tumbled yesterday after US President Donald Trump tweeted that prices are “too high” and urged OPEC to “relax and take it easy” with its efforts to boost the market.

Due to its safe-haven status, the US dollar was also lower against most of the other G10s. That said, today, USD-traders are likely to turn their gaze back to monetary policy and Jerome Powell’s semiannual testimony to the US Congress. The Fed Chief will testify before the Senate Banking Committee today, while he will deliver the same speech on Wednesday before the House Financial Services Committee.

At the January FOMC meeting, the Committee switched to a patient stance with regards to future rate increase, also announcing that they are prepared to alter the size and composition of their balance sheet if needed. The minutes of that meeting revealed that all members prefer to announce soon plans to halt the balance-sheet normalization this year, while with regards to interest rates the views were split. Several members suggested that a hike would be necessary only if inflation accelerates higher than their baseline outlook, while several others argued that they see the case of raising rates later this year as appropriate, even if the economy evolves as expected.

So, having all this in mind, we believe that there is little new information we can get from Powell’s testimony. That said, we will look for clues as to which camp the Fed Chief belongs, namely whether he supports any rate increase later this year or not. In our view, he could emphasize again that any future rate moves will depend on the data as well as the global financial conditions, but we doubt that he will close the door to any future hikes. Even Philadelphia Fed President Patrick Harker, who is considered a dove, said recently that one hike in 2019 and another in 2020 are appropriate. 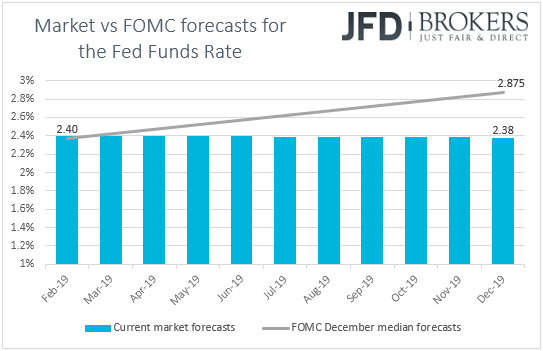 According to the Fed funds futures, the market is nearly 80% confident that the Fed will not push the hiking button this year, while there is an approximately 17% chance for a rate cut. There is even 1% chance for two cuts. The probability for a hike by December stands at a mere 2%. So, having that in mind, we see little room for negative surprises. The market appears already pessimistic with regards to the Fed’s future plans and thus, anything reinforcing the view of no hikes this year is unlikely to hurt the dollar much.

On the other hand, anything reviving hopes of even one rate increase by year end could prompt market participants to push slightly up the hike probability, as well as the dollar. Nevertheless, we are skeptical as to whether this could lead into a healthy uptrend for the greenback. Given its safe-haven appeal, any Powell-related gains could stay limited if the broader market environment stays “risk on” in the follwoing days due to elevated hopes of a final truce deal between the US and China.

Around mid-February, we saw EUR/USD reversing back up and traveling above the 1.1300 zone. That said, the pair seems to be stuck within a small range now, between the 1.1330 and 1.1365 levels. Given the prevailing recovery, we will remain cautiously bullish for now, as we would still like to see a confirmation break through the upper side of that range before we get comfortable with the upside in the short run. For now, we will stay put and observe the price action.

A push through the 1.1365 barrier would confirm a forthcoming higher high and EUR/USD could travel to its next destination, at around 1.1400. If the bulls continue dictating the rules, that level might be seen as a temporary obstacle for the pair and the rate could accelerate further. This is when we will examine the possibility of seeing a test of the 1.1435 barrier, marked by the inside swing low of February 1st. Near that area, EUR/USD could also touch the short-term downside resistance line taken from the high of January 10th.

Alternatively, if the pair exits the previously-mentioned range through the lower side of it, at 1.1330, this might lead the rate slightly lower. EUR/USD could hit the 1.1315 obstacle, a break of which may open the door to a further slide, which may take the pair to the 1.1275 level. That level acted as a good support zone on February 19th.

The main gainer among the G10s was the pound. The British currency came under strong buying interest overnight following a report noting that UK PM Theresa May is considering a plan to extend Article 50 in order to avoid a disorderly withdrawal on March 29th. May is likely to discuss the matter with her Cabinet, with the conclusions announced to Parliament later today, when May is scheduled update lawmakers over her progress in seeking changes to the existing Brexit bill. 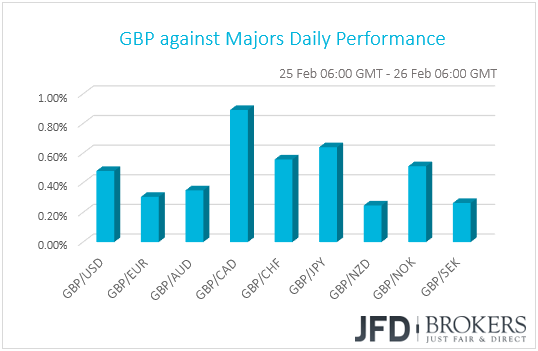 The news came a few hours after the Leader of the Labour Party Jeremy Corbyn agreed to support a second referendum. His reluctance to do so led nine Labour lawmakers to resign last week and market chatter suggested that others would follow if he didn't change course. “We are committed to also putting forward or supporting an amendment in favor of a public vote to prevent a damaging Tory Brexit being forced on the country,” Corbyn said.

Bearing in mind that there will not be a “meaningful vote” today, as May has postponed it until March 12th, focus will be on whether she will indeed make a U-turn and officially propose a Brexit delay, just a day after she said she remains “focused” on leaving on time. Something like that could support the pound somewhat further, but GBP-traders may prefer to wait for tomorrow, when the Parliament will have the opportunity to vote on legally-binding amendments. Even if May does not come with an extension proposal today, the approval of amendments that force her to request a delay from the EU could ease further concerns of a chaotic withdrawal and thereby, the British currency is could gain more.

Alternatively, a repeat of the decisions taken on January 29th is likely to revive some fears of a no-deal Brexit, and the pound could come under selling interest. However, given that MPs could have another opportunity to force May seeking an extension if they do not agree with what she will put on the table in two weeks, the slide could stay checked.

Yesterday, GBP/JPY managed to break through its key resistance zone at 144.80, which the pair was struggling to overcome since around January 25th. The rate moved higher and tested the 145.90 barrier, from which it corrected slightly to the downside. As long as the pair continues to trade above the 144.80 hurdle, we will aim for higher levels, at least in the short run.

On the other hand, a drop back below the aforementioned 144.80 hurdle could raise concerns in the bull-bloc over the short-run upside idea, as some buyers might temporarily abandon the field. GBP/JPY could then slide towards the 144.10 obstacle, a break of which may clear the way to the 143.35 level, marked by the high of February 13th. Around there, the pair could also test the short-term tentative upside support line drawn from the low of January 3rd. This is the area where the rate could get held, until the bulls and the bears sort out who will take control from there.

As for the Rest of Today’s Events

The only data on today’s agenda worth mentioning are the US building permits and housing starts for December, as well as the Conference Board consumer confidence index for February. Both building permits and housing starts are expected to have slowed somewhat, while the CB index is anticipated to have risen to 125.0 from 120.2, after sliding for four consecutive months.

As for tonight, during the Asian morning Wednesday, New Zealand’s trade balance for January is coming out and expectations are for a NZD 300mn deficit after a NZD 264mn surplus in December.

With regards to the speakers, apart from UK PM May and Fed Chief Powell, BoE Governor Mark Carney and several other MPC members will testify on the latest Inflation Report before the UK Treasury Committee. ECB Executive Board Member Yves Mersch will also speak.

Additional disclosure: The content we produce does not constitute investment advice or investment recommendation (should not be considered as such) and does not in any way constitute an invitation to acquire any financial instrument or product. JFD Group, its affiliates, agents, directors, officers or employees are not liable for any damages that may be caused by individual comments or statements by JFD Group analysts and assumes no liability with respect to the completeness and correctness of the content presented. The investor is solely responsible for the risk of his investment decisions. Accordingly, you should seek, if you consider appropriate, relevant independent professional advice on the investment considered. The analyses and comments presented do not include any consideration of your personal investment objectives, financial circumstances or needs. The content has not been prepared in accordance with the legal requirements for financial analyses and must therefore be viewed by the reader as marketing information. JFD Group prohibits the duplication or publication without explicit approval.
76% of the retail investor accounts lose money when trading CFDs with this provider. You should consider whether you can afford to take the high risk of losing your money.