JFD is a leading Group of Companies offering financial and investment services and activities. The parent entity, JFD Group Ltd was launched in December 2011 and is now an internationally licensed global provider of multi-asset trading and investment solutions. It provides commission-free trading in real stocks and Crypto CFDs as well as extremely competitive pricing for trading and investing in 1,500+ instruments across 9 asset classes. JFD is acknowledged by numerous independent sources as one of the fastest-growing and respected financial companies worldwide. Thanks to its core values of transparency, fairness and trust, many experienced investors consider the company as their best choice for self-trading, portfolio management and investment advisory solutions.

On Monday, no major releases or indicators are due to be released. Those worth-mentioning are already out. During the Asian morning, BoJ’s Summary of Opinions from the Bank’s latest meeting was out, while during the early European morning, we got Norway’s CPIs for April.

During the European session, Norway’s GDP for Q1 is coming out. Expectations are for the headline print to show that the economy contracted 1.5% qoq after expanding by the same percentage in the last three months of 2019. However, the mainland GDP is forecast to have accelerated to +0.3% qoq from +0.2%. In any case, we doubt that this release will have any material impact on policymakers’ view over monetary policy. On May 7th, they already decided to cut interest rates to 0% and noted that they will most likely remain at that level for some time ahead.

In the US, CPIs for April are coming out. Headline inflation is expected to have slowed to +0.4% yoy from +1.5%, while the core rate is forecast to have declined to +1.7% from +2.1%. Although this suggests that the fall in the headline rate may be mainly owed to the collapse in oil prices, a core rate below the Fed’s objective of 2% could keep the door open for further easing by the Fed. Last week, even the yields of the Fed funds futures turned negative, suggesting that there are some investors who believe that the Fed could make the exception and cut interest rates into negative waters, despite never being in favor of the “negative rates” regime. 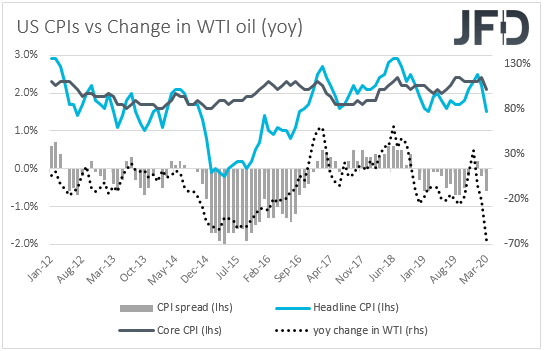 On Wednesday, during the Asian morning, we have a central bank deciding on interest rates and this is the RBNZ. A couple of weeks ago, the Kiwi came under strong selling pressure after Westpac said it expects the RBNZ to cut interest rates to -0.5% in November, a move that could be telegraphed as early as in August. They also said that they expect officials to double their QE program to NZD 60bn at this gathering. 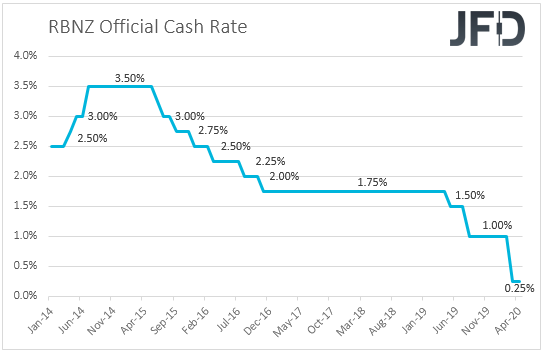 That said, last week, the employment data for Q1 came in better than expected. The unemployment rate ticked up to 4.1% from 4.0%, while the forecast was for a rise to 4.3%. The employment change showed a 0.7% gain in jobs instead of a 0.3% decline as the forecast suggested. This may have alleviated some pressure for policymakers to act again as soon as at this gathering, but it still remains to be seen whether they will decide to double their QE purchases or not. In case they do, the Kiwi is likely to come under renewed selling interest and could even underperform its Australian counterpart, which could stay supported due to the improvement in the broader market sentiment, as well as due to monetary policy divergence. Remember that last week, the RBA kept interest rates unchanged but announced that it has scaled back the size and frequency of its own bond purchases.

As for Wednesday’s data, during the Asian trading, Australia’s wage price index for Q1is due to be released. Expectations are for wages to have grown by 0.5% qoq, the same pace as in Q4, something that would take the yoy rate a tick lower, to +2.1% from +2.2%. In our view, a downtick in the yoy rate is unlikely to prompt RBA policymakers to scale up their QE purchases, although they noted they could do so if deemed necessary. With the spreading of the coronavirus leveling off, they may continue to scale back their program if data continues to allow so.

During the European day, we get the first estimate of the UK GDP for Q1. Expectations are for economic activity to have contracted 2.5% qoq after stagnating in Q4 2019. This will drive the yoy rate down to -2.1% from +1.1%. Last week, the BoE kept its monetary policy unchanged, but noted that the current QE is set to reach its target at the beginning of July. This, combined with officials’ readiness to take further action if needed, suggests that a QE expansion may be on the cards for the months to come. With the Bank also projecting a 14% tumble in GDP for the whole year of 2020, and Governor Bailey speaking about a 35% drop in Q2 activity, a better than expected Q1 print is highly unlikely to alter the Bank’s plans for further stimulus in the months to come. Thus, even if we get a better print, we see the case for any potential rebound in the pound to stay limited and short-lived. The nation’s business investment for the quarter, as well as the industrial production and trade balance for the month of March, are also due to be released. 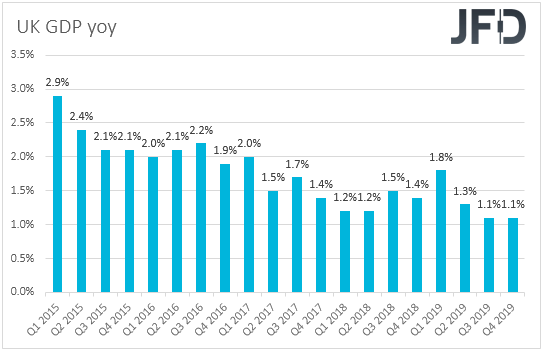 From Sweden, we have the CPIs for April. Both the CPI and CPIF rates are forecast to have tumbled to +0.1% yoy from +0.6%. That said, we prefer to pay more attention to the core CPIF metric, which excludes the volatile items of energy. In March, that rate ticked down to +1.5% from +1.6%, suggesting that the slide in the headline rates (from +1.0% yoy to +0.6%) was due to the collapse in energy prices. Thus, another downtick in the core CPIF rate would point that the headline rates fell for the same reasons in April, and it is unlikely to urge Riksbank policymakers to cut rates back to negative waters soon. For them to start thinking the possibility of such an action, a notable slide in the core CPIF rate may be needed. 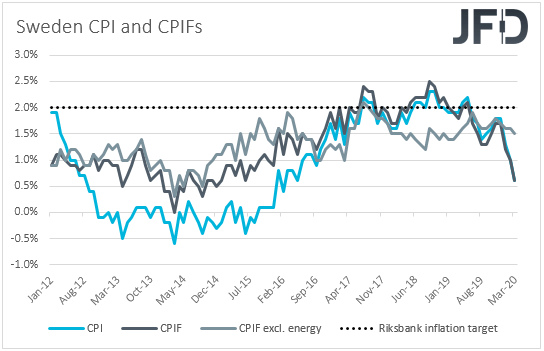 On Thursday, during the Asian day, Australia’s employment report for April is due to be released. The unemployment rate is expected to have risen 8.3% from 5.2%, while the net change in employment is anticipated to show that the economy has lost 575k jobs after gaining only 5.9k in March. With RBA policymakers scaling back their QE purchases, it would be interesting to see whether a soft employment report would be a reason for them to stop doing so. That said, our own view is that officials are aware that data for March and April may come on the soft side. With the spreading of the coronavirus slowing down and governments around the globe easing their restrictions, we think that the prospect of better days may allow them to continue reducing their bond purchases. 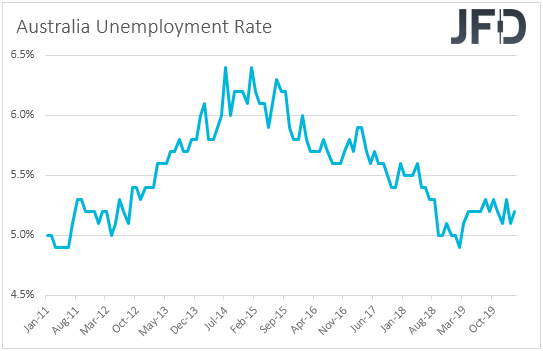 Later in the day, we get Germany’s final CPIs for April, and as it is always the case, they are expected to confirm their preliminary estimates.

During the European morning, we get Germany’s preliminary GDP for Q1, and the second estimate of GDP for the Eurozone as a whole. Germany’s economic activity is expected to have contracted 2.1% after stagnating in Q4 2019, while for the bloc as a whole, the second estimate is forecast to confirm that the Euro area economy shrank 3.8% after expanding only 0.1% in Q4.

In the US, retail sales for April are coming out. The forecast suggests that headline sales fell 11.6% mom after sliding 8.4% in March, while the core rate is expected to have declined to -8.6% mom from -4.2%. Industrial production for April is also due to be released, alongside the preliminary UoM consumer sentiment index for May. IP is anticipated to have fallen 11.5% mom, after declining 5.4% in March, while the UoM index is expected to have slid to 68.5 from 71.8.

Additional disclosure: The content we produce does not constitute investment advice or investment recommendation (should not be considered as such) and does not in any way constitute an invitation to acquire any financial instrument or product. The Group of Companies of JFD, its affiliates, agents, directors, officers or employees are not liable for any damages that may be caused by individual comments or statements by JFD analysts and assumes no liability with respect to the completeness and correctness of the content presented. The investor is solely responsible for the risk of his investment decisions. Accordingly, you should seek, if you consider appropriate, relevant independent professional advice on the investment considered. The analyses and comments presented do not include any consideration of your personal investment objectives, financial circumstances or needs. The content has not been prepared in accordance with the legal requirements for financial analyses and must therefore be viewed by the reader as marketing information. JFD prohibits the duplication or publication without explicit approval.

CFDs are complex instruments and come with a high risk of losing money rapidly due to leverage. 83% of the retail investor accounts lose money when trading CFDs with this provider. You should consider whether you can afford to take the high risk of losing your money.