Wednesday morning, I had a notice on my MacBook Air made by Apple (AAPL) that an upgrade was available. On the right-hand side on the upgrade button was the explanation that said the upgrade was available for free. That's the notice that peaked my query to understand where Apple is going next. Here is something that often gets overlooked due to all the excitement over the various iPhones popularity and resulting cash flow: Apple's Macbook desktops. Here is an interesting chart from a recent article: 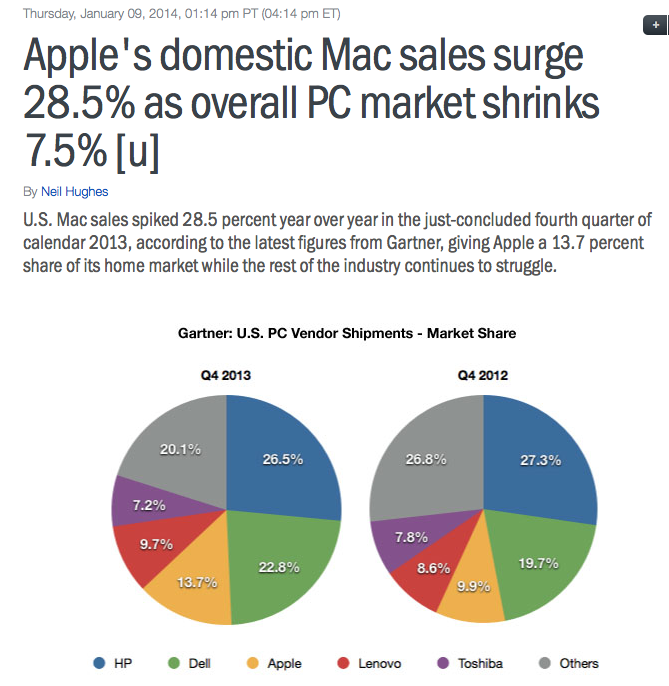 So you can see that in one year Apple jumped their market share in desktops from 9.9% to 13.7% which is pretty impressive. But what's more impressive is the performance of my MacBook air after the upgrade to Maverick. After my kids jumped on the MacBook this morning, they immediately asked what we did to the Mac that made it so fast. Two things to consider here are the software upgrade, free for now, but surely not forever and the Macbook Air's use of solid state drives or SSDs. Apple is clearly at the forefront of the SSD conversion movement in desktops by taking advantage of the speed and smoothness of using SSDs in combination with their slimmed-down super fast Maverick operating system upgrade. Encourage anyone who hasn't experienced a desktop with SSD and now with Maverick to try it clearly is the next frontier. With the cash piling into Apple coffers at $140 million per day and as the latest earnings report highlighted here said, " Perhaps the most surprising numbers were Mac sales, which jumped 20% from 4.1 million units in the year-ago quarter to 4.8 million. The last time Mac sales numbers went up was in 2012, and that increase was by only 1%." Perhaps that's what contributed to Carl Icahn's additional $500 million purchase in AAPL shares. With cash andmarketshare in desktops continuing their march higher for AAPL, we think all shareholders in the name including the razor sharp Mr. Icahn are in for a ride much higher soon. By the way, I dictated this entire article except for the links and the images on my MacBook Air.