Alexion Pharmaceuticals Inc. (ALXN) has had an abysmal run over just the last two sessions. While Friday saw the biotech — known for developing Soliris, a treatment for atypical hemolytic uremic syndrome (aHUS) and paroxysmal nocturnal hemoglobinuria (PNH) — become the S&P 500’s second-worst performer that session, the stock outdid itself during Tuesday’s session by being the index’s biggest decliner with a 5.5% loss. The continued selloff came on the heels of last week’s hostile move from a competitor regarding Alexion’s Soliris patent.

There’s no denying the biotech sector’s volatility this year, as the SPDR S&P Pharmaceuticals ETF (XPH) — a bellwether for all U.S. biotech and pharmaceutical firms — is down more than 17% over the last six months against the S&P 500’s 4.2% gain. But it’s rare for any kind of stock to experience the losses that Alexion has over the last two sessions, which has investors extremely nervous about the company’s future following the latest news.

Last week, competitor Amgen Inc. (AMGN) challenged Alexion by asking the U.S. Patent and Trademark Office (USPTO) to review Alexion’s patents on its blockbuster Soliris drug. The USPTO’s Patent Trial and Appeal Board (PTAB) said Friday it was launching a so-called inter partes review (IPR) of Soliris’ patents, which will force Alexion to defend its IP – specifically covering the drug’s main ingredient, formulation and use to treat PNH. The review is expected to take around a year to complete.Amgen tanked ALXN stock almost instantaneously, as the move signifies that Amgen wants to invalidate Alexion’s patents in order to gain an edge in the marketplace with its own biosimilar version of Soliris. It comes shortly after Alexion secured an extension on Soliris’s patent protection until 2027, a move that now seems unclear amid a fresh challenge to its intellectual property. According to reports, Soliris’s main patent is set to expire in the U.S. in two years.

How Investors ReactedInvestors dragged shares 5.5% lower on Tuesday to $95.18, the lowest settlement since Dec. 24 when ALXN — as well as the rest of the stock market — bottomed at $93.94. Tuesday’s performance followed Friday’s 10.2% crash from $112.17 to $100.76, which at the time was the worst close since Jan. 3. At Tuesday’s $95.18 close, shares are officially down 2.2% year-to-date from the Dec. 31 close of $97.36.The Bigger PictureAlthough Friday was likely thought to be nothing more than knee-jerk panic selling, the fact that ALXN continued lower with another 5% loss Tuesday illustrates how the company may actually be at risk of losing its Soliris patent. If that happens, Alexion would also lose control over the lucrative market for rare blood and muscle diseases like aHUS and PNH.That’s because Soliris is an enormous moneymaker for Alexion, making up a sizable chunk of the firm’s overall sales. Last year, Alexion’s total sales across all products grew more than 16% to $4.13 billion. Sales of Soliris climbed 13% to $3.56 billion, making up an insane 86.2% of the company’s total revenue. And although sales of Alexion’s other flagship drugs like Strensiq and Kanuma saw annual growth of 40% in 2018, their combined sales of $567.1 million don’t hold a candle to Soliris’s garganutan figure. Looking AheadIt’s tough to prognosticate whether or not Amgen — whose market cap of $123 billion makes it a forceful competitor to Alexion’s $24 billion market cap — will succeed in stripping Alexion of its prized product’s patent. However, investors also seem to have read the 2018 earnings report and understand that even the smallest chance of losing the sole rights to Soliris could financially devastate Alexion. That being said, investors should stay away from ALXN until the USPTO makes a decision. 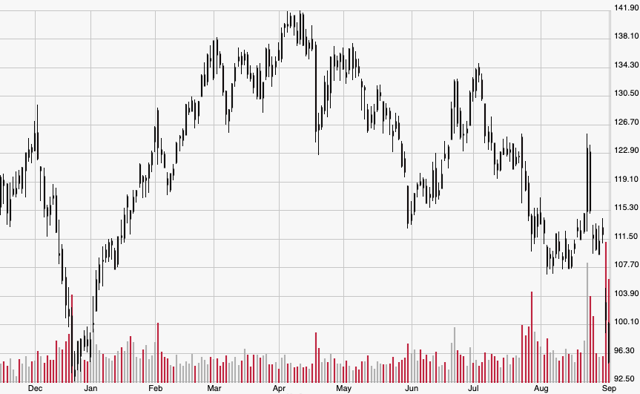