Enverus is the leading data, software, and insights company focused on the energy industry. Through its SaaS platform, Enverus provides innovative technologies and predictive/prescriptive analytics, empowering customers to navigate the future. Enverus’ solutions deliver value across upstream, midstream and downstream sectors, enabling the industry to be more collaborative, efficient and competitive. With more than 1,000 employees across the globe, the Company’s solutions are sold to more than 5,000 customers across 50 countries. Enverus is a portfolio company of Genstar Capital and brings together the technology of Drillinginfo, PLS, 1Derrick, MineralSoft, Midland Map Co., MarketView, DataGenic Group, PRT, Oildex, Cortex, Red Dog Systems and RigData as one company.

Creating the future of energy together. Learn more at https://www.enverus.com. 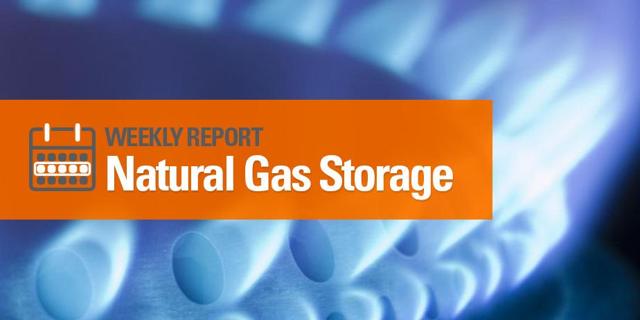 Natural gas storage inventories increased 49 Bcf for the week ending August 9, according to the EIA’s weekly report. This is well below the market expectation, which was an injection of 61 Bcf.

Working gas storage inventories now sit at 2.738 Tcf, which is 357 Bcf above inventories from the same time last year and 111 Bcf below the five-year average.

The injection this week missed well below the market expectation. This bullish report sent prices up to ~$2.26 post report. Before the report, prices gained slightly on yesterday’s close, and were trading between $2.15 and $2.18. As prices rallied up to the highs for the morning, there was a slow down to the rally around $2.26.

As we near the end of summer, the chances for a significant price rally are becoming limited. Extended heat will cause slight gains in prices, but any run will likely be limited. Another factor that could come into play is that we are entering peak hurricane season. Hurricanes and tropical storms have the potential to shut-in production, which will cause prices to increase. However, with LNG cargoes can be halted from entering the Gulf, causing a drop in demand and falling prices. The uncertainty of storms in the Gulf, while historically bullish, now have uncertain outcomes in terms of pricing. It is unlikely that the market will get an extreme price run this summer, especially with GCX expected to hit the market in late September. This pipeline runs from the Permian to the Gulf Coast and can carry ~2.0 Bcf/d. This will be the first major pipeline out of the Permian to hit the market and will be the start of relieving the pipeline bottleneck out of the basin.

See the chart below for projections of the end-of-season storage inventories as of November 1, the end of the injection season. 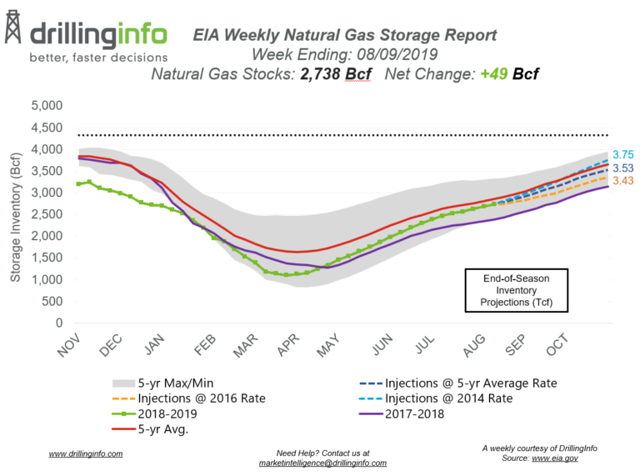 This Week in Fundamentals

The summary below is based on Bloomberg’s flow data and DI analysis for the week ending August 15, 2019.

Total supply is down 0.16 Bcf/d, while total demand decreased 0.30 Bcf/d week over week. With the lack of movement in supply and demand week over week, expect the EIA to report a similar or slightly stronger injection next week. The ICE Financial Weekly Index report is currently expecting an injection of 69 Bcf. Last year, the same week saw an injection of 48 Bcf; the five-year average is an injection of 51 Bcf.