The marketing mantra has long been product, price place and promotion. If these marketing drivers were ever once silos, they are now nodes in a network; receiving information and transmitting a response in real time in a dynamic marketplace. Price is a function of place as the concept of place toggles between the physical and virtual worlds. Disruptive companies are known for dislocating distribution channels or rearranging the profit pool by discounting price. Incumbent companies have been the victims of disruption, is there an opportunity for start-ups to take advantage of the disruption of others to build a brand or product line? If the disruptor is the velocity of change in a category, can a well-positioned start-up change the acceleration of change. We believe that the economics of disruption do not accumulate only to the original disruptor but also to companies positioning themselves to understand the nodes of the new market network. Amazon, Apple and Uber have all seen other companies follow in their wake to grow at rates that would not have been attainable without the original disruption of the industry.

Harold Hotelling’s seminal paper on retailing imagined two purveyors of summer drinks utilizing pushcarts on the beach. Both start at the extreme ends of the beach to maximize their real estate or place but in order to minimize poaching by the other they end up next to one another. The two nodes next to one another are the Nash equilibrium to maximize profit and minimize regret. Today’s marketplace replaces the linear beach with a multi-dimensional virtual world where place consists of infinite nodes and price consistently changes as a function of the other factors. How does one take advantage of the new reality? We believe that as the disruption occurs in the industry it is important to ride the wave viewed from the beach rather than swim against it.

The Next Phase of Disruption

Disruptors change the profit pools and sometimes drain the incumbents. Yet they create opportunity for others. Amazon, Apple and Uber have disrupted industries while giving birth to many derivative markets. We distinguish a start-up or enlightened competitor capable of using disruption to go to market as a Disruptor².

A graph of disruption (Christensen) can be viewed as performance on the y-axis and time on the x-axis. The z-axis is non-consuming locations where the disruptor is not starting at the bottom of the market but rather starting at creating consumption out of typical non-consuming occasions. This is the competitive advantage of the disruptor²; creating new opportunities to gain share, obtain data and compete from the rear flank of the incumbent instead of head on.

We believe that the conditions necessary for a disruptor² are:

Additionally, there is a hierarchy of disruptor² based on their ability to maximize the use of the data.

Lessons from the Animal Kingdom

The animal kingdom has 5 types of relationships: Competition and Predation, Commensalism, Parasitism and Mutualism. The last three are symbiotic, the first two are not. Commensalism defines a relationship where one party benefits while the other is unaffected. Parasitism harms the host while mutualism creates a better outcome for both. It is self-explanatory why a start-up does not want to engage well capitalized rivals in the predatory and competition models but by engaging in mutualism there is an opportunity to grow.

Examples of mutualism have long existed in the marketplace, co-branding and joint marketing campaigns have been a stalwart of sporting events or tentpole movies and quick service restaurants. While one brand has distribution available, the other has a revenue driving opportunity such as a movie or new product. These relationships often exist among established brands without an easy entry point to establish a new brand. The outcome of this relationship is to increase the velocity of sales in traditional distribution networks.

Mutualism is nature’s way to provide diversity and co-evolution. Pareto’s law exists as approximately 80% of seed dispersions of plants are mutualistically tied to animals. The fauna-animal relationship allows the plants to populate at distances much greater than could be accomplished without.

Amazon’s infrastructure is used to distribute goods from small businesses that could not be accomplished without a relationship. Although there is a case to be made that the deal tilts in Amazon’s favor, the alternative for the small business is much bleaker without it. These small businesses are the base case of a disruptor². Their relationship with Amazon allows them basic data such as interested customers in order to attract what was previously a non-consumer to them. If the customers are one-time purchasers then the base case is maintained, if the customer is a steady purchaser of a non-durable good, then the migration to the more evolved disruption²may occur.

A company that can create a mutualistic relationship with another yet capture customer data can generate accelerating sales. No longer are the sales a onetime pickup at a sole retail node, now there exists customer data to market additional products and services. Customer reward programs were the genesis of this category but now the marketer must be less transparent with their objectives. Consumers are aware that their reward program data is being sold in order to show them unwanted offers from statistically weak correlated product offerings. The trip to Miami does not necessarily generate a swimsuit purchase even if the seller of swimwear pays for the data. 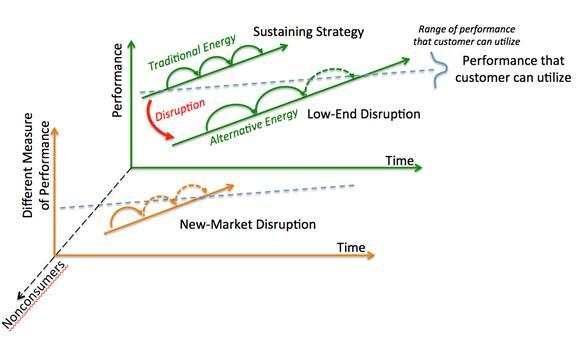 Christensen points out that there are three factors to a disruptive innovation:

A disruptor² is a company that utilizes the enabling technology to generate data in order to target and reach the non-consumer or lower end consumer. The new-market disruption occurs as the customers use the disruptive technology to sample but grow as customers through targeting enabled by the data.

Manchester United is known for its massive fan base that approaches 650 million fans. Prior to the i-Phone, much of the fan base existed in markets where real time game experiences did not exist as well as the advertising dollars that accrue from the experience. The introduction of the i-Phones and the Android satisfied a different measure of performance for the consumer. While the smaller screen is not the highest performing mode of viewing, it allowed non-consumers to enter the marketplace. The coherent value of the network took a step-function upwards as marketing and advertising dollars began to rise. Data that had never been attainable was used by a company that was not the innovator to build a business in a mutualistic relationship.

Manchester United is a more evolved disruptor² than the base case because their mutualistic relationship allows exploitation of data that was otherwise unattainable to them. Manchester United can move beyond the initial purchase consideration and build a lifetime relationship because of the data provided by the disruptive technology.

While the Apple device has proven disruptive, the applications have owned the category of disruptive². The i-Phone changes the communication category, but the data derived from the applications accelerate consumer offerings from a variety of industries. As the i-Phone allows the ability of fans around the world to enjoy the game in real time and satisfy an upper right point on the performance/time chart, the team utilizes data from the experience to accelerate the benefits of utilizing the i-Phone with enhanced customer interaction.

Uber may not fit the textbook definition for disrupting the taxi business in New York or Boston, but it enabled the introduction of the ride-sharing business that is revolutionizing small to mid-size town transportation and retail. Uber is not a simply a ride business, it is a moving retail location. Our previously discussed pushcarts were mobile enough to meet market demand but did not create it by its omnipresence. Once inside an Uber there is an opportunity to have the full attention of the rider to deliver products and messaging. The rider’s needs have no competition for this brief period while most of the barriers to purchase or sample have been removed.

The concept of place is no longer a discrete function but a continuous one as the rider cannot remove herself from the node until the completion of the ride. The removal of competitive pricing, products and promotions occurs due to this unique place.

Cargo, a retail box within Uber ride, is the mutualistic partner that can provide a consumer package company diversity and co-evolution. The intersection of tens of thousands of sampling opportunities daily with focused customer attention generates customer engagement from diverse demographics. Like the fauna-animal relationship spreading seeds, a rider in New York can be from any city, any age and almost every income. The statistical data arising from such sampling is richer than any extrapolation model.

When Cargo is introduced into an Uber ride, all three of the disruptive components exist. The accessible population to the marketer increases, the non-consumers are engaged while Cargo, the driver and the rider all benefit from the business arrangement.

The evolution of disruption has now been observed. There is also a revolution ready to occur in the marketing funnel. 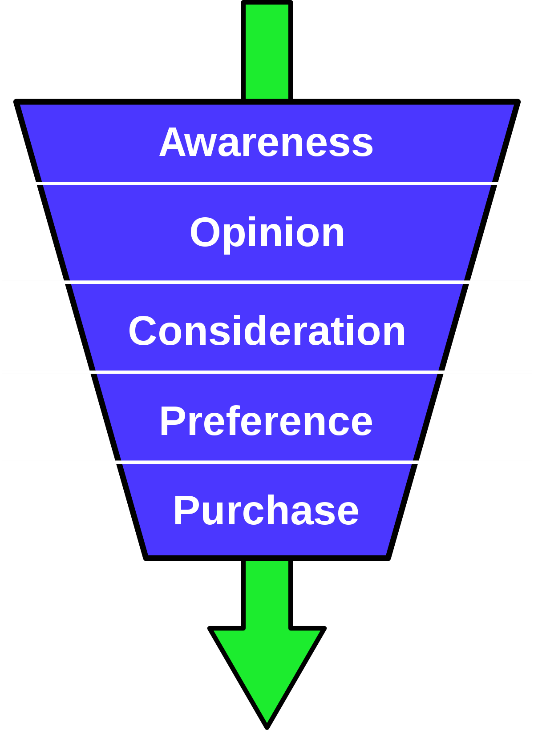 Above is the marketing funnel. While most brands begin with awareness to build a brand, Cargo allows a product without a market to begin with purchase (or sample) and gather data on preference and consideration from the consumer with follow-up offers. This gives the marketer a feedback loop before the expense of building a brand occurs. Resources dedicated to “out shout” a cluttered marketplace can be diverted to customer sampling and feedback. The customer pulls the product through the marketing funnel rather than a brand manager pushing it.

Cargo can promulgate a purchase, start a customer relationship and build a brand, the trifecta of a mutualistic relationship. There is a revolution in brand building developing and Cargo is at the forefront. Let’s look at the old and the new paradigms.

The merits of brick and mortar retail are substantial, and it is not going to be totally displaced soon. However, brands and emerging brands can take a lesson out of nature. Diverse and widespread growth can happen from a fixed point if a mutualistic partner is involved. Cargo is such a presence.