AUD/USD recorded sharp losses last week, dropping 1.5%. The pair broke below the symbolic 0.70 level for the first time in 2019. Traders should keep a close eye on Chinese Caixin Manufacturing PMI and Australian building approvals. Here is an outlook for the highlights of this week and an updated technical analysis for AUD/USD.

Australian CPI dropped sharply in Q1, sending the Aussie reeling. CPI fell to 0.0%, down from 0.5% in Q4. This was the weakest reading since Q1 of 2016. Core CPI edged lower to 0.3%, shy of the estimate of 0.4%. In the U.S, last week’s numbers were positive. Durable goods orders climbed 2.7%, crushing the estimate of 0.7%. Core durable goods orders gained 0.4%, marking a 9-month high. This was followed by a strong initial GDP release of 3.2% in Q1, well above expectations. This was much stronger than Final GDP for Q4, which came in at 2.2%.

The U.S, posted strong numbers last week. Durable goods orders climbed 2.7%, crushing the estimate of 0.7%. Core durable goods orders gained 0.4%, marking a 9-month high. This was followed by a strong initial GDP release of 3.2% in Q1, well above expectations. This was much stronger than Final GDP for Q4, which came in at 2.2%.

AUD/USD daily graph with support and resistance lines on it. Click to enlarge: 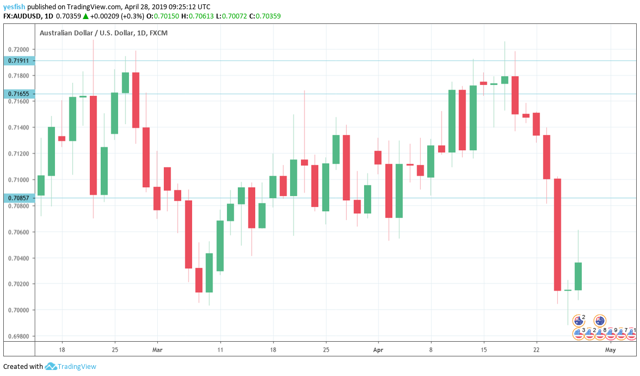 We start with resistance at 0.7480. This marked the high point of the pair in mid-July and defends the round 0.75 level.

The round number of 0.74 was the high point reached at the wake of December. This is followed by 0.7340, which the pair breached in late November.

0.7315 was a swing high seen in late September. Further down, 0.7240 separated ranges in September and in October.

0.7190 remains relevant and was tested during the week.

Close by, 0.6970 (mentioned last week) was under pressure late in the week as the pair posted sharp losses.

I remain bearish on AUD/USD

The U.S-China trade war has taken a toll on the Australian economy, as China is Australia’s largest trading partner. With the RBA in dovish mode, the Aussie will have a tough time attracting investors.

Our latest podcast is titled: How bad is the global slowdown? Examining the three main economies