Focused on analyzing business and financial modeling to discover the opportunities of long-term investments.

Although gas pipe expansion has made natural gas more accessible, and global warming has decreased energy demand in the winter, volume of propane sold has been stable in recent decades. The market is mature with little volatility in volume sold.

Although the switching cost is not significant, propane consumers tend to stick with their current suppliers. Customers are not price sensitive and value long term relationships.

There are three major players in the propane industry - AmeriGas, Suburban, and Ferrellgas. AmeriGas continues to be the market leader by volume sold. The volume sold of Suburban has been declining since the acquisition of Inergy Propane in 2012. Ferrellgas has high degree financial leverage after the acquisition of Sable Environmental in 2014.

Propane is widely used across different sectors, including residential, commercial, agricultural, and industrial sectors. The residential sector accounts for more than 50% of the market. In-home heating and commercial usage together create high demand for propane. 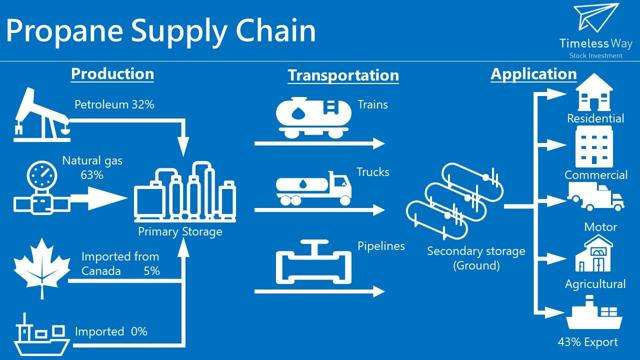 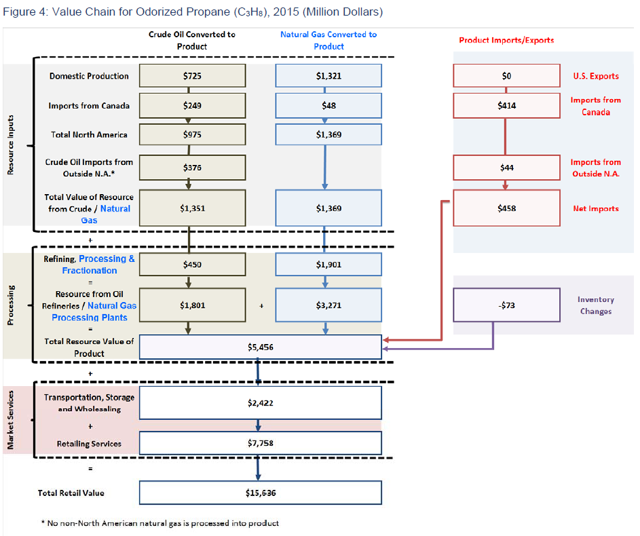 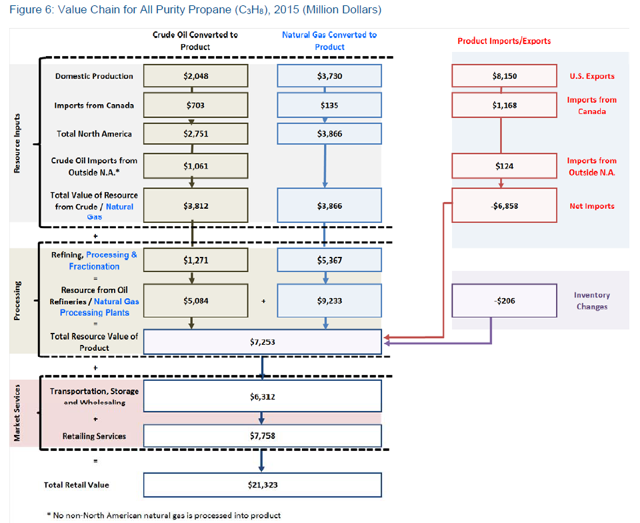 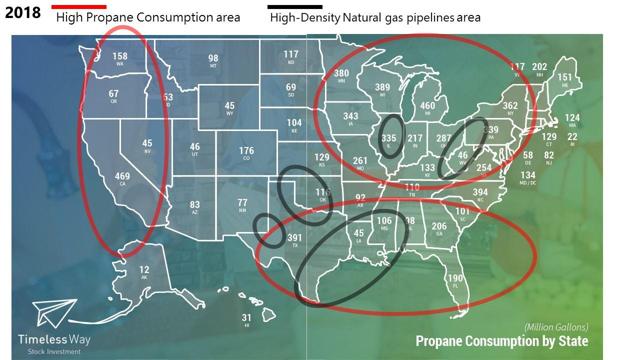 In the past decade, the demand for propane has been very stable. Although the overall market remains unchanged, we observed only a slight downward trend. We think the change is so slow and is not likely to be a concern in the near term. It took 32 years (from 1981 to 2013), for the market to grow 66%, peaking at 19.7 million gallons sold in 2013. The CAGR from 1981 to 2013 was only 0.004%. With such slow growth, propane distributors were still able to deliver strong financial results. In addition, industry demonstrated immunity to market crisis. Facing the threat of better accessibility to natural gas and global warming, demand for propane stayed stable and decreased less than 0.1% yearly from 2013 to 2018. Thus, we conclude that propane demand is stable and resilient to economic changes.

Figure 4. Propane demand is stable in past 30 years

Note. we converted unit of propane and natural gas to gallons

Currently, there are three major factors affecting propane demand - urbanization, global warming, and expansion of natural gas pipeline. We will look into each factor separately.

In the 20th century, strong economic growth resulted in rapid urbanization in the US. The US urban population continued to grow, reaching 80% of the total population in 2010. In the beginning of urbanization, large cities underwent massive natural gas pipeline expansions. Better accessibility to natural gas decreased propane demand. However, the growth of urban population is outpacing the expansion of pipelines. With little to no accessibility to natural gas, suburban residents are generating strong propane demand.

Over 50% of propane is used for residential space heating. Thus, we have to consider the potential effect of global warming.

From historical data, the average temperature increased 2 degrees Fahrenheit from 1900 to 2018. Also, according to another indicator, Heating Degree Day (HDD), the demand for space heating energy declined significantly from 1949 to 2018.

HDD in US, Degrees Fahrenheit

Natural gas is indeed a cheaper and cleaner substitute for propane, but is unlikely to pose a threat for three reasons. First, it is not cost effective to expand natural gas pipelines to underserved areas. Considering global warming and saturated population in cities, natural gas companies have little interest in investing in massive pipeline expansion plans. Second, the residential and commercial sectors for both natural gas and propane are saturated with little change. Propane consumption only accounts for less than 0.05% of total energy consumption. Natural gas companies are unlikely to undertake expansion projects for such a fractional share. Last, there has been little pipeline expansion in the past few years. Most construction is to repair or replace original pipelines. Based on these three reasons, we do not believe natural gas pipeline expansion will have much impact on the propane market.

Note: we converted unit of propane and natural gas to gallons 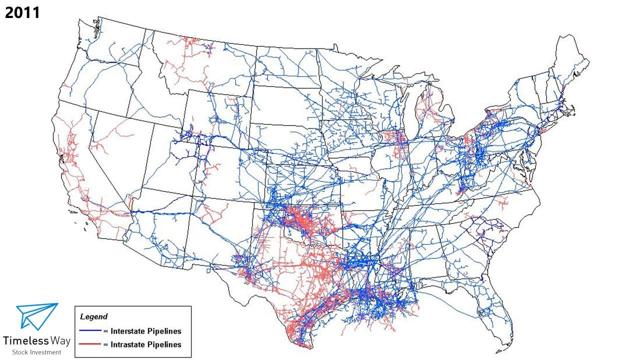 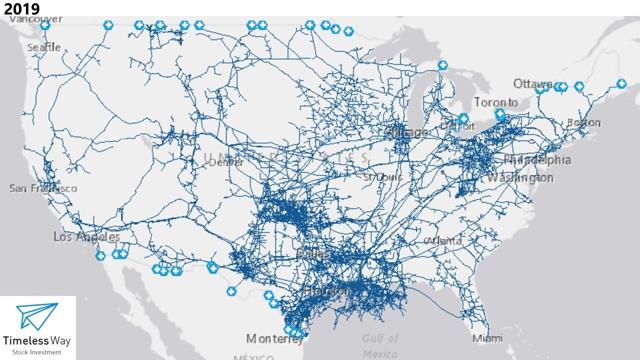 In conclusion, the three influential factors - urbanization, global warming, and expansion of natural gas pipelines - will cause minimal impact on the propane market. We expect propane demand to continue at the current level over the next few years.

Since the demand for propane is stable and the market is resilient to threats, why have all the propane companies underperformed the market index in recent years? 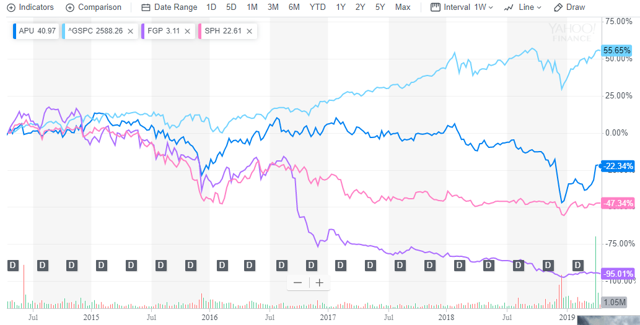 The propane market is extremely fragmented. Figure 12 shows the market share of the top three propane distributors - AmeriGas, Suburban, and Ferrellgas. None of the top three players have more than 10% share of the market. These three companies together only account for roughly 15-20% share. Market shares have also changed minimally in the past decade, suggesting that shares are likely to remain relatively unchanged over the next few years.

Figure 12.The market share of top-three propane distributors is stable

Also, the business model of all propane distributors is similar - purchase propane from wholesalers, add a markup, then deliver the product to consumers. Assuming the markup is fixed and not related to volume sold, changes of propane retail price is based on change of wholesale price. Thus, business revenue is decided by two factors - wholesale price and volume sold.

Analysis of propane volume sold showed that for all three companies, the volume sold has trended downward slightly from 2013-2016, but has become stable since. The increases in volume sold in 2011 (AmeriGas), 2012(Suburban), and 2014 (Ferrellgas) were all caused by business acquisitions. There were no significant changes in the volume sold overall.

Now we have the evidence that propane volume sold is stable, but we don’t see revenue follows the same pattern. How about the wholesale price? Is it the main factor causing revenue going up and down?

In 2014, natural gas prices dropped greatly due to shell gas booming. Since 60% of propane is processed from natural gas, the wholesale price dropped accordingly. At the same time, weaker consumer bargaining power delayed response of retail price to the drop of wholesale price. However, with the markup pricing strategy, propane distributors also experienced revenue decrease in 2015-2016.

Figure 14.The revenue of distributors follows the trend of wholesale price

The delayed response to wholesale price resulted in revenue and operating profit moving in opposite directions. This is also likely why these companies did not deliver impressive financial result in the past few years, a takeaway to bear in mind when evaluating a propane distributor company.

In terms of competition, low entry barriers makes this industry fragmented. Yet, it is uncommon to see consumers switching distributors. Even though the switching cost is not significant, consumers still tend to stay with their suppliers over the long term.

Assuming no major changes in natural gas prices over the next few years, we believe there may be an investment opportunity in the propane market. Considering stable volume sold and the rebounding of the markup to wholesale price ratio, propane distributors are positioned to deliver stable financial results.

Among the three biggest market players, AmeriGas has the greatest potential.

AmeriGas is the largest propane distributor in the US. Retail business accounts for 95% of its sales. Sales is generated from different sectors, including residential 36%, commercial 38%, transportation 18%, and agriculture 4%.

AmeriGas is an MLP(Master limited partnership) company. An MLP is a partnership that is traded on a national exchange, which offers significant tax advantage to both general and limited partners. It is generally required that the company distribute all available cash to investors. In the energy sector, it is very common for companies to operate as an MLP to reduce the cost of capital, although this can create concerns that the company may not be able to pay its current debt.

Data shows that the volume sold of AmeriGas is stable. In 2011, AmeriGas acquired Heritage Propane and reached more than 2,500 distribution locations in total. Although it closed some distribution locations because of overlapping territories, the company has kept the same level of operation in all 50 states since 2016. Also, same store volume sold has been stable over the past 3 years.

Thanks to a mature business model, AmeriGas is able to operate in high degree of financial leverage. The company continues to generate healthy free cash flow even in the face of volatile wholesales price. Customer loyalty and stable volume sold both contribute to steady revenues.

However, there is some concern regarding the amount of distributed dividends, which is greater than company’s free cash flow. AmeriGas may have to change its dividend distribution policy at some point.

Based on our analysis, we believe, AmeriGas is currently undervalued. The overreaction toward the growth of natural gas and global warming, as well as concern around the company’s ability to pay debt, brings the Price-to Free Cash Flow ratio down to 10.5. The 10% dividend yield is also impressive. We also think the risk for the stock price to slump is minimal, considering steady free cash flow.

We do not see good investment opportunities in either Suburban or Ferrellgas. Suburban has been struggling from a decline in same store sales since 2012. Although the current Price-to-Free Cash Flow Ratio is only 7, which is lower than AmeriGas, we don’t see opportunity in Suburban if the volume sold continues to decline.

Ferrellgas entered the midstream propane transportation business by acquiring Sable Environmental in 2014. Nonetheless, it was a questionable decision and created huge financial burden to the company. High financial debt ratio and low interest coverage ratio has lead the company into huge financial distress.

In conclusion, the propane market is stable and has potential for investment. Along with the price drop of natural gas, we expect propane companies to deliver better financial result. AmeriGas outperforms the other two large players and has a healthy financial position. Suburban struggles with sales decline, while Ferrellgas is in financial distress.

Currently there is no opportunities for merger arbitrage in APU. We do not see other investment targets in the propane industry at this point in time.