Frank started market timing in 1982 when the Federal Reserve cut interest rates and sparked the 1980’s bull rally. Realizing that this rally could have been forecasted, he began to search for indicators which had similar forecasting ability. Within a year, his first newsletter was launched, “Growth Fund Strategies Report” which used a market timing strategy consisting of changes in interest rates, Fed changes, Market breadth and market price (using the S&P 500 Index). The strategy was hugely successful and issued a major sell signal on September 10th, 1987, just five weeks before the market crash on October 19th. In 1996 his first market timing website was launched. “Market Timer Report” used a refined strategy to market time the general U.S. stock market, and followed a variety of growth stock mutual funds. It was geared towards more conservative mutual fund investors and averaged only one to two switches a year. By the end of the 1990s, the strategy was refined to one that followed market trends instead of using interest rates and breadth on which to base market timing decisions. Because trend following never missed major trends trends, and those trends which failed resulted in minimal gains or losses, it became apparent that this was the better way to profit in what was quickly becoming a hugely overbought stock market. The bear market of 2000 through 2002 generated substantial “bearish position” profits by following trends and Frank began using Fibonacci support and resistance levels to look forward and help identify trends. In 2002 we changed the name of our timing service to FibTimer.com (live link) to better identify ourselves to prospective subscribers. We also began the process of adding new timing strategies, using our trend trading systems to develop both aggressive market timing strategies as well as conservative market timing strategies. In time we added sector fund timing, gold fund timing, bond fund timing and small cap fund timing. In 2003 we expanded to ETF timing strategies as well as starting a portfolio of individual stocks. All using our trend following systems to time the markets. Frank is currently the editor and chief market analyst of FibTimer.com, as well as president of Market Timing Strategies, Inc.

Only Monday we wrote that shares of Market Vectors Gold Miners (NYSE: GDX)) were in a sustained downtrend and would likely move lower still.

On Tuesday, GDX gapped down at the open and closed with another substantial loss, in this case just a fraction above $40.

Apparently this was support for GDX as round numbers often are and on Wednesday, May 9, the stock has posted a bullish outside reversal day. 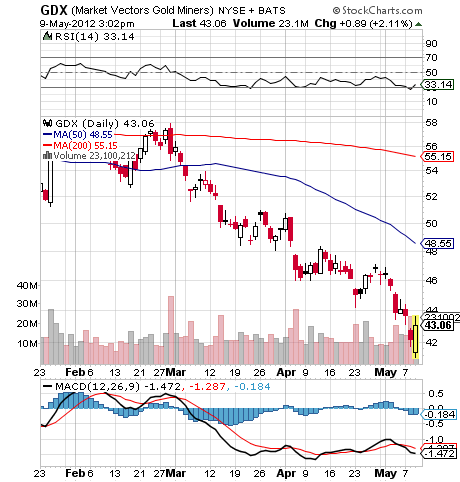 The bullish indicator may be short term in nature, forecasting only several days of advancing prices. It could also mean a tradable bottom is in place. There is no way to know at this point so any trades should be placed with tight stops.

IF GDX was to close above $45 a share in coming weeks, we would be looking at a potential new upward trend.

The Fibtimer.com (www.fibtimer.com) ETF Timing Strategy does not currently have a position in Market Vectors Gold Miners.

Frank Kollar has been timing the financial markets since 1982, with online service since 1996. He is a dedicated trend timer and his strategies exited the markets before the crash in 1987 as well as the bear market in 2000 through 2002. During the 2000-2002 bear market and the 2008-2009 bear market his bearish positions resulted in substantial gains, all achieved by trading trends.