There is no doubt in this bloggers mind that the EU leader eventually will agree on, and sign, a new fiscal Treaty for the euro zone. But the really interesting question is; will it actually work? Or will this be the document that buries the whole EU idea once and for all?

"The new Treaty provides little enhancement with respect to the Stability and Growth pact and includes measures that are either too vague or likely to be ineffective." 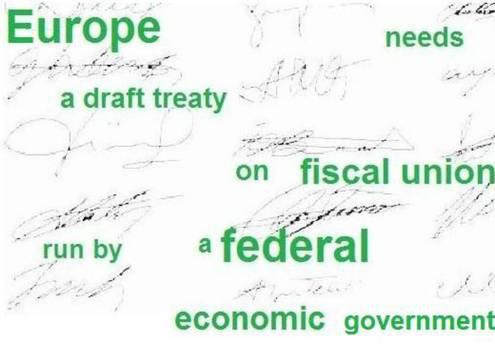 Well, according to Professor Massimiliano Marcellino at the European University Institute it will not. "This is surely not the right moment to spend so much time in drafting a new treaty that does little to address the most pressing short-term problems of theeuro area," Professor Marcellino writes in a commentary, adding: "But let's assume for a moment that the Treaty is approved, and without major modifications."

It's a perfectly timed commentary, and raises some of the really fundamental questions around the plans for a new fiscal Treaty amongst the euro zone members.

Here's the rest of the article, published today at the www.eurointelligence.com:

Why We Don't Need The New Fiscal Treaty

The first goal in the treaty is to "foster budgetary discipline" and Title III of the draft treaty introduces measures aimed at achieving this target.

The key economic indicators used in Title III are the structural balance of the general government, which is required to be balanced or in surplus, and the ratio of the general government debt to gross domestic product (GDP), which in the long run should not exceed 60%, and if it does it should be reduced by an average rate of one twentieth per year.

The problem of a target in terms of structural balance is that this variable is not observable. It must be constructed by cyclically adjusting the actual balance.

There is no consensus about how to measure the business cycle even among economists, so it can be expected that member states will have very different opinions about the state of their business cycle and hence about the meaning and measurement of "structural balance".

In addition, it is not obvious from an economic point of view that growth promoting expenditures, such as investment in education and research, should be included in the computations.

Equally problematic is the debt to GDP ratio, considered by many as the prince of fiscal indicators.

However, it is a strange indicator: in the numerator there is a stock variable, the total amount of government debt, and in the denumerator a flow variable, the gross domestic product in a given period.

The latter is considered as an indicator of the capability of the government to repay its debt. But to reflect fully the financial conditions of a government, it would also have to include a measure of the total government assets.

In addition, the value of 60% for the debt to GDP ratio, inherited by the Stability and Growth pact, does not have any serious economical basis. And there seems to be little awareness that reducing the debt to GDP ratio by one twentieth per year, it would require continuous tightening of fiscal policy with negative effects on GDP growth, which would make this policy ineffective while the economic conditions of the country worsen.

Much more preferable are thus targets defined in terms of actual deficits, ratios of debt not only to GDP but also to assets, and more gradual convergence criteria.

The main concern remains however, namely that the procedures in case of a breach of the rules remain very long and complicated, and that the penalty system is unclear and insufficient to prevent future misbehaviour, in particular in the case of a large country.

The second goal of the new Treaty is "to strengthen the coordination ofeconomic policies", article 9 states that "… the Contracting Parties undertake to work jointly towards a common economic policy fostering the smooth functioning of the Economic and Monetary Union and economic growth through enhanced convergence and competitiveness".

To this aim, article 11 clarifies that "With a view to benchmarking best practices and working towards a common economic policy, the Contracting Parties ensure that all major economic policy reforms that they plan to undertake will be discussed ex-ante and, where appropriate, coordinated among themselves."

Here there is quite a bold statement: to work jointly towards a common economic policy.

Taken literally, this has major implications.

But how can we expect that member states are ready to do this after they so utterly failed in the past?

And does this imply that national parliaments should partly give up their authority?

And what happens in case of disagreement on how to foster growth or convergence?

And what is the actual role of other European institutions such as the European Parliament?

Finally, in terms of governance of the euro area, the Euro Summits are welcome but, according to their description in Title V, they seem to be just discussion fora, and in this sense their value added with respect to other existing fora is not clear-cut.

The new Treaty provides little enhancement with respect to the Stability and Growth pact and includes measures that are either too vague or likely to be ineffective.

It also fails to address the current crisis.

Financial markets are more worried about short and medium term solvency than about the enhanced long-term sustainability and policy coordination.

Without bolder actions to prevent a break-up of the euro area this new Treaty is likely to become redundant.

Massimiliano Marcellino is professor at the European University Institute in Florence.

This article is syndicated by www.eurointelligence.com.