How I Invest:- I invest in business ideas having long term innovative effect on a global scenario. STOCKS? --> I prefer entering on a LOW, and stay put with the stock as if it were my company and grow with it...!! But hello, the company has to be fundamentally above average. . Based out of USA as well as Kolkata and Assam, India. U can know more by visiting www.tusnial.weebly.com !! Interested??.... Wish to get associated??.... LET US TALK!! 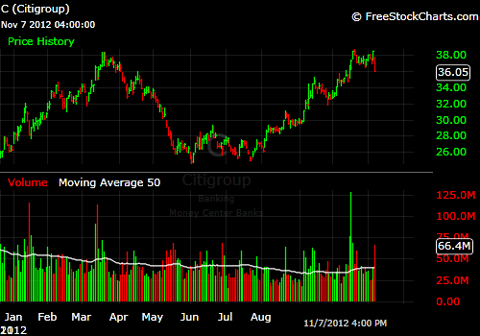 Citigroup is a globally diversified financial-services holding company. Its businesses provide corporations, consumers, institutions and governments with an expansive range of financial products and services. Citigroup now works through three major limbs which we state herein-below:

Although most big banks faced the financial turmoil in the past years, Citigroup has been able to survive and move forward. Reason being its derisking and a diversified spread over 160 jurisdictions and countries. At the same time this bank covers 200 million customers. This saved the bank from a big impact due to U.S. slowdown. Citi will continue to expand strategically in the 'growing' emerging markets which will leverage its risks and influence revenues in future.

Citigroup's tactics to deleverage by cutting down noncore assets and increasing the fee-based business may although seem a setback in the near term (with specific view on revenues). But rest assured it does augur well, and a leaner, stronger, faster-growing Citi will emerge. The runoffs and winding-downs in Citi Holdings, of the problem assets, will derisk and free up more capital to use toward productive use including investments in its well-performing core businesses eventually.

The bank currently has good reserves which cover the bank too comfortably against future probable losses or economic emergencies. Size and spread have disadvantages such as make exposed to ever-changing regulatory-requirements. This may affect Citigroup negatively. Further, the company has overall disappointed in passing the 2012 stress test and by failing in significantly increasing shareholder value. Certain lawsuits also linger.

Third quarter results have been impressive overall, with specific emphasis on EPS, lower expenses, higher global consumer banking revenues, and lesser bad asset provisioning. Giving back of significant shares of MSSB to Morgan Stanley did dent a minor loss. But excluding this and the CVA and DVA adjustments, revenues improved about 3% over same quarter in last year.

A behemoth, Citigroup is undergoing transformations which may be impacting its shorter term performance. But the same strategy adopted today to stay afloat and become competitive will make the company leaner and creative in future, to its benefit as well as benefit of shareholders. 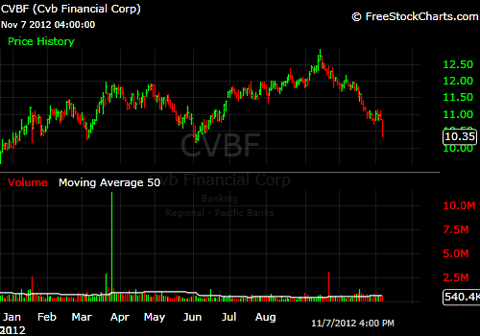 CVB Financial Corporation has 42 business financial centers located in the Inland Empire, Los Angeles County, Central Valley and the Orange County areas of California. Besides, it has 5 commercial banking centers located in Encino, Torrance, Los Angeles, and Burbank. A bank holding company for Citizens Business Bank that provides various banking and trust services for small and medium-sized businesses, professionals and individuals, CVB's founding year is 1974 and it now headquarters in Ontario, California.

This is an excellent bank, having low cost of funds and an avoidance policy for subprime lends, and its following conservative lending-standards. It is no joke that CVB Financial consecutively ranked (over last 30 years) as a Super Premier Performing Bank for 19 years, and a Premier Performing Bank for 11 years by the Findley Report. Not possible if no mettle lies in the bank.

Third quarter results recently announced, it portrays streamlining of balance sheet and overall performance with competitiveness as well as polishing itself to deal with future challenging environment in a better way. High and low points of the company are:

Besides earnings results, we must also look at the overall historical performance of this company. This is one great stock that has given us 92 consecutive quarters of handsome dividends and a 'mighty' 142 quarters of profit. Currently with $6.30 billion of assets, lending-growth of 400% (from $1 billion to $3.9 billion) and a past decade increase in deposit-growth of almost 300%, who would not like to have CVB for dessert?

A rock-solid performer, a top-ranking dividend payer, and a must for a portfolio even for longer terms, that's CVBF! 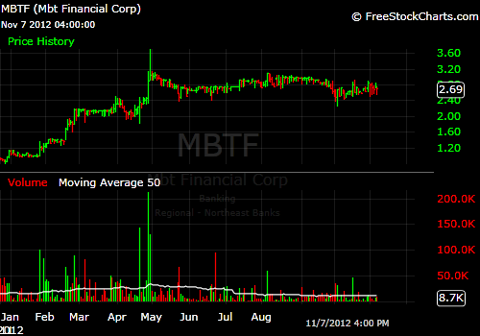 Incorporated in January of 2000, MBT Financial Corporation headquarters in Monroe, Michigan. It serves as a holding company of Monroe Bank & Trust, a fully-owned subsidiary originally founded in 1858, with service areas consisting of Monroe and Wayne counties in Southern Michigan. Among the larger community banks in Southeast Michigan, MBT boasts of incomparable and customer oriented mind-set.

With 24 offices and 40 ATMs, the arsenal of MBTF consists of a comprehensive array of products and services including complete range of business and personal accounts, credit choices, and phone and online banking services. Its Wealth Management Group is one largest and most respected in South-Eastern Michigan.

Earnings and results from second quarter, followed by the third quarter (earnings results just announced) have been encouraging:

The Third Quarter results released just now have been much beyond investor expectations and in line with performance history.

MBTF needs to be cautious in this rather-bad business environment to continue this winning-run. It can do this by continuing to focus efforts on improving asset quality, controlling expenses, preserving liquidity, and seeking new sources of revenue and capital continuously .

Though small when compared to big leaders, MBTF is another investable and trusty ALPHA-stock. Below its value, it's a solid performer. MidTerm to LongTerm buy (if you do not own already) and hold (for those who already hold this stock). 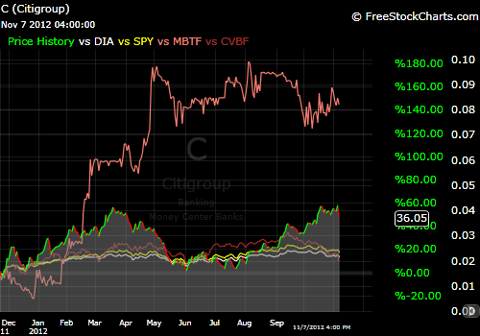 Note on Sources: This article would not be informative had I not researched various-facts and material on various-websites and other-resources. Major ones are Yahoo, Google, Nasdaq, among others. Charts are from www.freestockcharts.com . A big thank you to all of them for the relevant matter and guidance indirectly charging my analytical thought.