Technical Analysis & Japanese Candlesticks Trader as a full time job, over 15 years of experience, combining with fundamentals and thorough DD to find the best entry & exit points, Biotech sector expert, following this sector for over 4 years, trading the clinical catalyst & following the stocks runup till the catalyst day.

“While ALXA is running up in anticipation of an NDA filing scheduled in July, Protalix has been preparing to submit a complete response regarding the company’s NDA for Taliglucerase Alfa which may surprise the biotech trading community...”

Protalix Biotherapeutics Inc. (PLX) is a biotech company focused on the development and commercialization of recombinant therapeutic proteins based on their proprietary ProCellEx(TM) protein expression system.  By leveraging the ProCellEx platform, Protalix has created a strong pipeline of next generation biologics.  The company’s initial focus has been on complex therapeutic proteins which include treatments for rare genetic disorders such as Gaucher disease and Fabry disease. Their lead product candidate, Taliglucerase Alfa, is an enzyme intended for the treatment of Gaucher disease.

Gaucher disease is a chronic, progressive, inherited genetic disorder caused by insufficient levels of a particular enzyme, glucocerebrosidase (GCD). As a result, fatty acids accumulate in certain cells in the body and can cause mild to severe symptoms. Patients can experience anemia and low platelet levels, yet such accumulation can even cause organ damage to areas such as the liver and spleen.  The current treatments available in the market are enzyme replacement therapies, such as Genzyme’s Cerezyme (also known as Imiglucerase).

Protalix filed a New Drug Application (NDA) for Taliglucerase Alfa on December 9, 2009, and on January 2010, the FDA requested additional data regarding the chemistry, manufacturing and controls (CMC) section of the NDA submission. Protalix provided the requested data to the FDA in April 2010, and on July 2010, the Company received notification from the FDA that they accepted Protalix’s filing and assigned a Prescription Drug User Fee Act (PDUFA) goal date on February 25, 2011.

In November 2010, Protalix submitted a marketing application for Taliglucerase Alfa to the Israeli Ministry of Health (MOH), and Pfizer, Protalix’s commercial partner, submitted a Marketing Authorization Application (MAA) to the European Medicines Agency (EMA).  Protalix also filed marketing applications in Brazil and Australia. Let us keep this fact in mind as we continue on recollecting the data available to us.

Many believed that Taliglucerase Alfa had a shot on obtaining FDA approval (one prime example was Oppenheimer’s equity research on PLX), but on February 25, 2011, the FDA issued a Complete Response Letter (CRL) regarding the company’s NDA for Taliglucerase Alfa. A CRL is issued by the FDA's Center for Drug Evaluation and Research when the review of a file is completed and questions remain that precludes the approval of the NDA in its current form. The main questions raised by the FDA regarding the NDA related to the clinical and CMC sections.  In the clinical section of the CRL, the FDA requested additional data from the ongoing switchover trial and the long-term extension trial. At the time the NDA was submitted, full data from these trials were not available.  In the CMC section of the CRL, the FDA requested information regarding testing specifications and assay validation. The FDA did not however request additional clinical studies in the CRL.

On February 20, 2011, Protalix received a letter from the FDA notifying that the FDA had completed its review of the Establishment Inspection Report in connection with the FDA's inspection of Protalix facility in Carmiel, Israel, and that the FDA had classified the facility as acceptable.

Protalix’s management has been preparing to submit a complete response, given Pfizer’s co-operation, who has worldwide commercial rights to the Taliglucerase Alfa (except in Israel, where Protalix retains the right to commercialize Taliglucerase Alfa). The first step in the process was a meeting scheduled with the FDA in May 2011.  At that meeting, Protalix received certain clarifications regarding the CRL.  Dr. Aviezer, Protalix’s President and CEO, informed me that during this face-to-face meeting with the FDA, the agency did not raise any new issues. The discussion at the meeting clarified the information requested by the FDA. Protalix believes they can provide the additional data requested and are working to ensure the response is thorough and complete.

One month after Protalix received the CRL, I had the opportunity to meet with Dr. David Aviezer at Protalix’s headquarters in Carmiel, in which also in attendance was a small group of investors. The objective of the meeting was to better understand the issues outlined in the CRL and how Protalix’s management will properly address to those certain issues.  The group also had the opportunity to tour the manufacturing plant.  I left the meeting with a positive impression: Confident that the Protalix team, along with their Pfizer partners, have been working diligently to collect the additional data and generate the information requested. The company plans to submit a complete response in a couple of months, as stated on their 10-Q on page 10.

Recently, after meeting with the company’s Investor Relations firm, the Trout Group (NYC), and speaking again with Dr. David Aviezer, I am confident that Protalix is close to the resubmission.  I believe that the Company will be able to address all of the requests the FDA had asked for in their complete response approximately near the end of July until mid-August.

After the resubmission, the FDA will notify the Company within 14 days if they accepted the NDA resubmission and assign a Class I or Class II review:

I anticipate that Protalix will get a Class II resubmission according to the data that was requested by FDA. If they receive a Class I resubmission, it may benefit shareholders significantly since there is less time to discount the event of possible approval.

If Taliglucerase Alfa is granted FDA approval, then this will trigger additional regulatory milestone payments of up to $50 million Pfizer obligated to pay to Protalix, as part of their exclusive license and supply agreement.

Additional Catalysts in the Near Future

While Protalix is planning to prepare for upcoming FDA action, recall that Protalix has other programs in progress for Taliglucerase Alfa outside of the U.S.

Approval in Brazil may precede the FDA approval.  The Brazilian approval process through The National Health Surveillance Agency (in Portuguese, Agência Nacional de Vigilância Sanitária, ANVISA) is not connected in any way to the FDA’s approval process and hence Protalix could gain approval before year end in this country. Approval in Brazil could trigger a long-term supply agreement that contemplates transferring certain components of the manufacturing technology to the Ministry of Health of Brazil.  I do not expect a long-term supply agreement to be signed before Protalix receives marketing approval of Taliglucerase Alfa from the ANVISA.

In November 2010, Pfizer submitted a Marketing Authorization Application (MAA) to the European Medicines Agency (EMA). Pfizer received the 120 day questions in April 2011, with a GMP audit planned for 3Q 2011. The EMA decision date will approximately take roughly a year from the submission date, so Protalix expects a European decision around year end in 2011.  Approval in Europe will trigger another milestone payment from Pfizer to Protalix as stated on their license and supply agreement.

The rest of the world

To date, given that marketing applications for Taliglucerase Alfa have been submitted in the US, European Union, Brazil, and Israel, recall that Pfizer also submitted a marketing application for Taliglucerase Alfa in Australia in May 2011. The Australian approval process through The Advisory Committee on Prescription Medicine (ACPM) formally known as the Australian Drug Evaluation Committee (OTC:ADEC) approximately endures a year’s worth of time from the submission date to the ACPM decision date. Therefore, Protalix expects an Australian decision around the second quarter of 2012.

New Drugs on the Horizon

This product is a therapeutic protein candidate that is biologically and chemically modified to improve upon the current treatments for Fabry Disease, a rare, genetic lysosomal disorder. The Company is in advanced R&D development, which includes product characterization and determination of release specifications.  Protalix has performed proof of concept studies in a “Fabry mice” knock out model. The company held a pre-IND meeting with the FDA in December of 2010.  This year, Protalix will conduct more toxicology studies and plans to submit an IND to the FDA.

This product is a plant cell expressed pegylated recombinant acetylcholinesterase (AChE) which is intended for biodefense and CNS.  In March 2010, Protalix initiated a preliminary phase I clinical trial of PRX-105 which was completed in June 2010. Protalix is currently preparing for further efficacy trials of this product candidate in large animal models.

This product is a plant cell expressed recombinant anti-TNF fusion protein made from the soluble form of the human TNF receptor (TNFR) and an antibody portion. The amino acid sequence is identical to ENBREL. PRX-106 is intended for the treatment of certain auto immune diseases such as rheumatoid arthritis, juvenile idiopathic arthritis, ankylosing, spondylitis, psoriatic arthritis and plaque psoriasis.

Their last proposed public offering of common stock was approximately 4.9% of their total shares outstanding which was in effect after PLX received the CRL.  Management now has sufficient cash ($50.23M) to comfortably withstand the FDA review cycle for Taliglucerase Alfa.

As shown below, given the price drop Protalix suffered after receiving the CRL from the FDA on February 25 2011, and how the price was testing the support region on March 18, 2011 (the dilution date) the same day of that drop, the price initiated a slow reversal followed up by a flat trend. The Bollinger Bands at this time began to compress to each other causing a sign of a volatility squeeze, the same volatility squeeze shown last year.

This volatility squeeze cause the price to move from the $6.5 level to the highs of $10.05 in two months, shortly accompanied with a small correction, then reaching to a new high of $10.60. The resubmission that is to be expected in the span of 2 months is believed to be the catalyst to jump start the new uptrend towards the new PDUFA date. I think, provided this recollection of data, we will see the same uptrend this year as well.

For the latest technical analysis and chart click here Chart 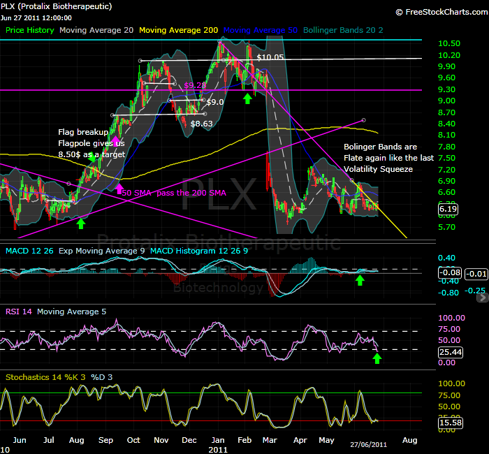