Arthur Laffer refuses to go quietly into that good night, as if his 15 minutes of fame had not sufficed.  I think his name alone would make him a great villain in a Batman movie, but not much more.

For some reason, the editorial staff of the Wall Street Journal continue to look kindly on the eminence grise of the supply side and continue to publish his ill-founded ramblings. Yesterday Laffer returned to his soapbox and published an op-ed piece in the Journal claiming that -- when the Bush administration's ill-considered tax reductions lapse in 2011 and we revert to the tax brackets we had under Clinton (when we ran a surplus) -- the economy will be ravaged. As evidence he introduces the following bar chart. 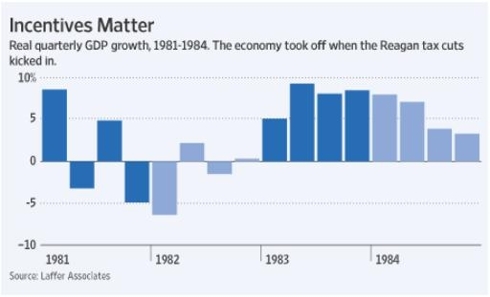 Well, it's true the tax cuts played a role, but there were other factors at play.  Carter appointee Volcker's hard medicine of interest rate discipline had brought inflation under control, and we thank him for that.

And -- as was the case with Bush's tax cuts -- Reagan's were really a big, poorly disguised subsidy to private sector balance sheets.  After campaigning on the evils of Democratic deficit spending, under Reagan deficits ballooned.  Try this chart on for size. 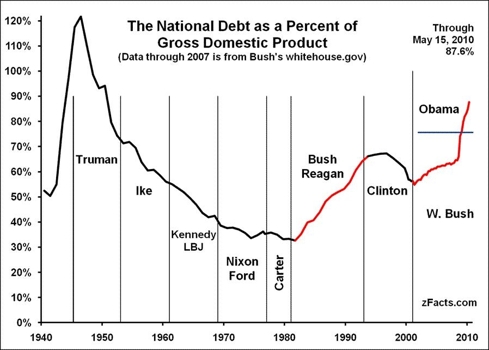 Reagan primed the pump in his own way, and the only supply-side lesson we learned from the Reagan years was that a large supply of federal debt helped bond and equity markets alike.  The Laffer Curve never really brought in the tax revenues it was supposed to, which was a key contributor to this debacle.

Now, I don't want to sound unduly strident. Much as we Democrats disliked it at the time, Reagan and his team convincingly demonstrated that there were a lot of services that the private sector could provide better than the government.  That was a secular shift that benefited the nation over time.  Similarly, there was a need for some deregulation.  It has worked well at times, less well at other times, but it was a legitimate debate that the Reagan's election called to the forefront of national discourse.  "Morning in America" and Lee Iacocca tramping around the plant with a big smile on his face seemed vapid and shallow to some of us at the time, but in retrospect those were important contributions to the national psyche, just as Carter's "Malaise speech" was an important moment of truth-telling.

To return to Laffer.  In his piece yesterday, he argues that corporations are taking profits now to outrun tax hikes in the future, and that Roth IRA conversions will also pull forward tax revenues from the future (the best estimate I've heard of the impact of the Roth IRA rule is $150 billion taxes from 2010-2012, but not from thereafter -- this from a life insurance industry lobbyist), and that therefore we'll have no tax revenues and greatly diminished corporate profits in the future. The Bloomberg story about Eddy Lampert of ESL taking $829 million in Sears stock out of his hedge fund onto his personal books to escape new carried interest tax treatment would seem to support this argument.

But tax revenues and macroeconomics are very complicated, more so than a strict ideologue like Laffer ever seem to have figured out in practice.  Frankly, I'd rather take my chances on a slide-rule pragmatist like Peter Orszag.