The past week in monetary policy was dominated by Asian central banks, with the central banks of Japan, Indonesia, Thailand, and South Korea all announcing interest rate decisions.  The only banks to adjust interest rates were Thailand +25bps to 3.25%, and Kenya, which dropped its discount window rate -175bps to 6.25%.  Meanwhile those that held interest rates unchanged were: Japan 0.10%, Indonesia 6.75%, Latvia 3.50%, South Korea 3.25%, and Chile 5.25%.  Elsewhere in monetary policy and central banking, Brazil's central bank announced further policy measures to curb speculation on its currency, the Real. 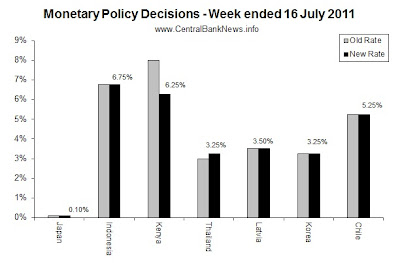 While inflation remained a threat for most of the central banks who reviewed monetary policy settings during the week, for many the focus was squarely on the downside risks to both domestic and global growth.  Indeed a couple of the banks pointed specifically to the tail risks in the form of the European sovereign debt crisis.  For those that held rates unchanged, for the most part the messaging was positive, with some viewing inflationary pressures as somewhat contained, while many presented a positive outlook on their domestic economy.

As per usual, following is a selection of key quotes from central bank monetary policy statements and media releases from the past week:


As for next week the Reserve Bank of Australia (19th of July), and the Bank of England (20th of July) will release the minutes from their most recent monetary policy meetings, meanwhile the following central banks are scheduled to review interest rates: