Adam's background marries extensive hands on company building experience with a successful track record as a venture capitalist, investment banker and director of both private and publicly-held technology companies across North America. Adam's extensive knowledge of the Canadian technology and special situations universe is unparalleled. His extensive networks, relationships and deep technical knowledge of business issues have generated outstanding results and returns. Adam is Executive Chairman with operational responsibilities and over-all responsibility for capital allocation strategies at International Datacasting Corporation, which is listed on the Toronto Stock Exchange under the symbol IDC. IDC is a global player in the point to multipoint broadcasting market in the areas of data, video and radio (www.datacast.com). Caseridge Capital Corporation is an independent, boutique advisory firm that specializes in working with senior management teams, public and privately held businesses and institutional money managers in the design and implementation of corporate finance strategies. Our team is dedicated to providing superior service and planning solutions for the unique and sophisticated needs of our clients. Our process involves assisting our clients and coordinating our efforts so that we provide the required results. We develop an understanding of past experiences, current needs and goals for the future. We analyze and recommend funding alternatives that include corporate, partnership, individual and strategic alternatives. We review similar transactions both inter and intra industry to provide a bona fide list of comparable and targeted results. Adam is a Chartered Financial Analyst (CFA) with a B.Comm from the University of Toronto.

Where is this market heading?

Now that we are in the midst of a market correction: what next? Where do we go from here? For the answer to this let’s take a look at the charts to see what our GMM model is telling us.  Now this might get technical, so bare with me for a few moments:

This chart dates back to May 2008 to provide us with pre-market meltdown and recovery context.  Let’s go through each of the indicators to provide some colour. 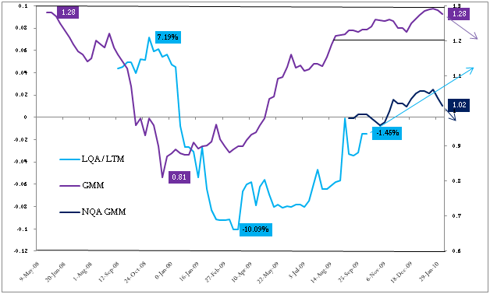 In purple the GMM is presently at 1.28 – at or above the highs from before the massive market selloff.  This indicator is based on trailing financial statements dated as at early October, 2009.  In our model, this indicator acts as a proxy for the forward gross profit growth rate over the ensuing twelve month period.  In short: as at February 5, 2010 the market is pricing in a 28% increase in gross profits for the period between October 2009 and October 2010.

The LQA/LTM indicator in light blue shows us the current rolling run rate of gross profits dated as at the average date of the trailing financials, which as of today means early October, 2009.  This chart shows that at the end of the third calendar quarter of 2009, aggregate gross profits in the Caseridge TechSys Index declined by 1.45%.  To clarify, this means that annualized gross profits as at the end of the third quarter of 2009 were about 1.5% lower than in the preceding twelve month period.

The NQA GMM indicator in dark blue is a forward looking indicator that is based on consensus analyst estimates for gross profits and gross margins in the “next quarter”; and which is annualized for the purposes of our model.  This indicator is at 1.02 as at February 5th.  This means that the market is fully pricing in the results of the analysts’ consensus estimates for the next quarter, and then some.

In the final analysis, this market will move as the combination of gross profits and gross margins is revealed.  The market will begin to advance on a sustainable basis if the GMM declines to below 1.20 as a result of strong gross profit growth rates.  We expect that this will begin once the average age of the trailing financials moves from October to December.  If it doesn’t, then we’re in for some further declines.