Dr. John L. Faessel is a seasoned and respected Wall Street professional with industry-wide recognition for expertise in market strategy and analysis. He is widely recognized for his insights in public companies. For over 25-years Dr. Faessel’s ON THE MARKET reports have been widely distributed to a throughout the world to an extensive list of financial institutions, investment banking firms, brokers, foundations, mutual funds, hedge funds and private high net worth investors.

Quote of the Day

Relevance in today’s world is for you to discern

Today let’s start with funny …“If life were fair, Elvis would still be alive today and all the impersonators would be dead.”

"The bottom-line -- we see an economy [World’s minus USA] that is growing more slowly than we had anticipated,"

At the World Government Summit in Dubai.

The US economy is on a huge roll as the so called experts who were adamant about a tariff caused disaster couldn’t have been more wrong. Looks like Trump’s instincts were right once again.

We just experienced a 12% stock market gain in 7-weeks, near 3% annual growth, 304,000 new jobs created and prices have remained flat (they actually went down on a month-to month basis). And inflation? There isn’t any. Add that the U.S. Treasury collected $8 billion in tariffs, 83% more than it did a year earlier. Big picture we’re experiencing an economic boom while the world’s lefty economies are (as usual) moribund.

Could Germany be heading for a #recession?

And Uh-oh! #Germany's industrial production fell an enormous 4.7% in November. On a year-on-year basis that’s the most since December 2009.

Going forward Berlin just cut its economic-growth estimate for 2019 to 1% from 1.8%. 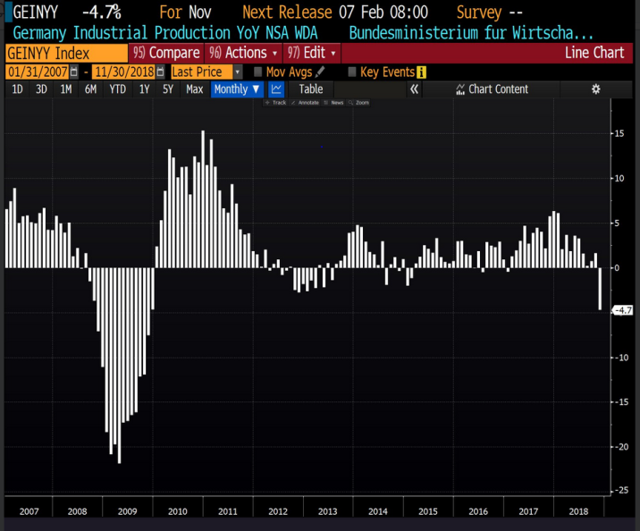 More on the Great US Economy 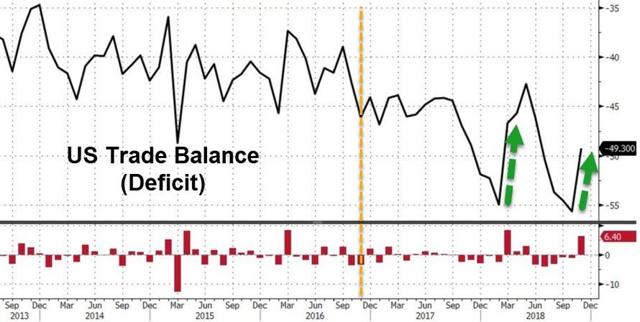 And things are continuing to slow in China.

The gap between US and China GDP growth has been shrinking over the last decade. 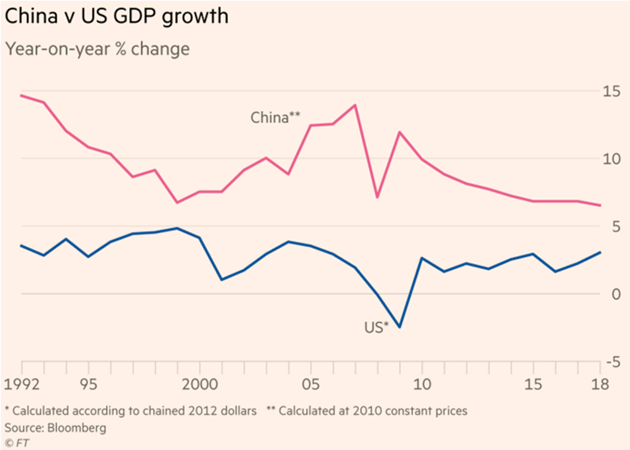 Men still make more money than women, but to see the differences in wage growth, compare these two charts from the Federal Reserve Bank of St. Louis. Here are male wages since 1979:

Contrast that chart with the positive story of the female economic revolution: 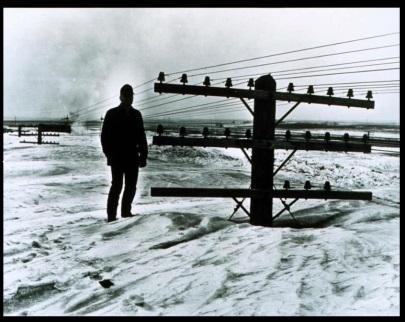 The overview of Investor sentiment – (a contrary indicator) – is beginning to burn hotter as the market continues its historic 12% advance.

Bullish sentiment moved decidedly into Euphoria in late 2017 as it had been rising bullishly along with the unprecedented spike in the market post-election. Most numbers were well into the Alarm Zone of “too bullishness” in Late December 2017 and especially in January 2018 driven by the tax cuts that created a huge jump in earnings for corporate America. This was the first time in many years that we had reached these very high Bullishness / Euphoria levels.

Cycle highs or lows are in red