Investors looking to benefit from rising interest rates by taking long positions in bank stocks will be attracted to Bank of America's (NYSE: BAC) large foot print, CET1 target compliance, and relative sensitivity to interest rates. However, it does appear that there are cheaper options among their peer group. Prudena's models indicate that BAC shares are likely 4% undervalued, but investors should be confident that the accounting accurately depicts the value of Bank of America's assets before taking a position. 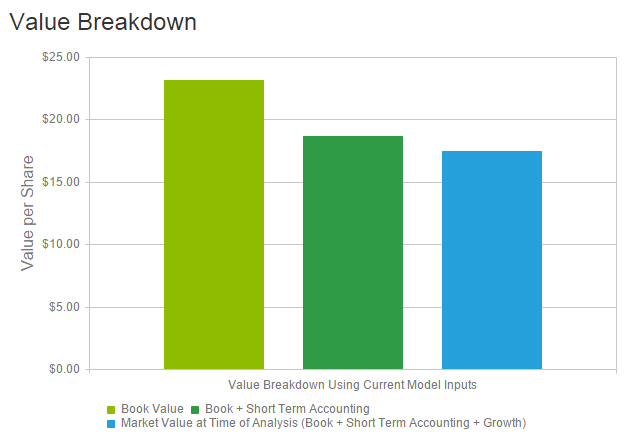 Using a multi-stage residual earnings model, Prudena estimates value per share of $18.30 to $20.22 for Bank of America. A Monte Carlo simulation, which captures the range of possible outcomes based on various inputs for the cited residual income model, estimates a most likely share value of $18.20. Prudena's models suggest that BAC shares are most likely 4% undervalued, and could be trading at a discount to intrinsic value by as much as 15.4%. Investors should note that the residual earnings models cited here assume that the accounting value of Bank of America's assets is a reliable representation of the actual value of those assets. These do not include consideration for non-performance of assets beyond that reflected in the company's accounting. 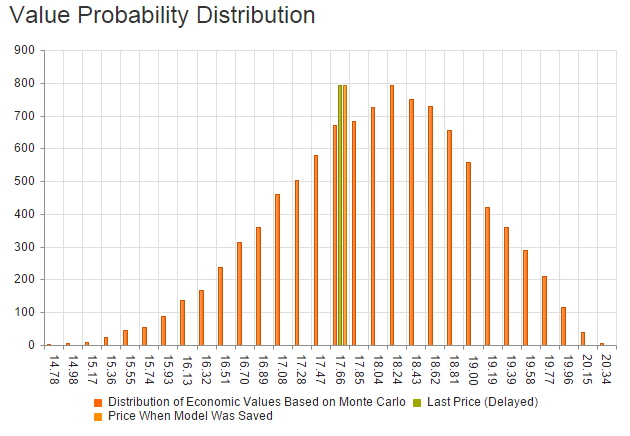 Try your own model!

Bank of America is a market leader in card profitability, home equity lending, and investment asset growth. The company also holds a leading wealth management market position and was ranked No. 1 in Barron's top 1,200 ranked financial advisors. Bank of America was named the best global research firm for the fourth consecutive year by institutional investor magazine in 2014.

Most of the effects of economic turmoil, regulatory measures and restructuring are behind the US banking industry. The prospect of Fed tapering signals higher interest rates on the horizon, from which lending institutions will benefit. A more robust economy should bolster lending and baking services volume. Analysts project as much as 20% growth in BAC's earnings for a 1 percentage point rise in interest rates. Bernstein's banking analyst has stated that BAC is more sensitive to rising rates compared to competitors JP Morgan (NYSE: JPM) and Citigroup (NYSE: C). This makes Bank of America a favorable pick as markets anticipate tapering in coming years.

Even if the Fed begins tapering in coming months, interest rates will remain well below historical levels for the medium term. Higher regulation and supervision has permanently altered cost structure in the banking industry, and the risk remains that compliance and administrative expenses will continue to grow under increasing regulatory scrutiny. Global financial instability is another risk to the banking industry. Russian sanctions, Chinese macroeconomic slowdown, and sovereign debt crises in the Euro zone could threaten economic activity and creditworthiness of counter-parties.

Bank of America's operating margin of 30% is inferior to JP Morgan's, 37% and Wells Fargo's, 43%. BAC is also the most expensive, in terms of PE, when compared to its counterparts. Bank of America's 1.14% dividend yield compares negatively to that of Wells Fargo's 2.62% and JP Morgan's 2.57%. There appear to be cheaper alternatives to gain exposure to the financial sector under the rising rate environment. BAC is also prone to frequent litigation and fines. The company has paid $205 million in recent periods for misconduct in currency markets.

The banking sector should benefit going forward from a more stable US economy and interest rates rising from Fed-driven lows. Major banks are now past much of the turmoil from the 2009 crisis and subsequent regulatory impacts, though macro concerns in Europe, Russia, and China still represent risks for global banks in the near term. Bank of America is especially sensitive to interest rates, and looks like a good play on those rates as they rise. The company will also benefit from improving expense structure as physical presence gives way to mobile and online services for customers. Despite these tailwinds, some of BAC's peers have cheaper valuations.

Prudena's models suggest that BAC is slightly undervalued, though this lacks a nuanced assessment of asset quality. This research indicates that Bank of America warrants some research, but their balance sheet should be closely scrutinized by prospective investors.